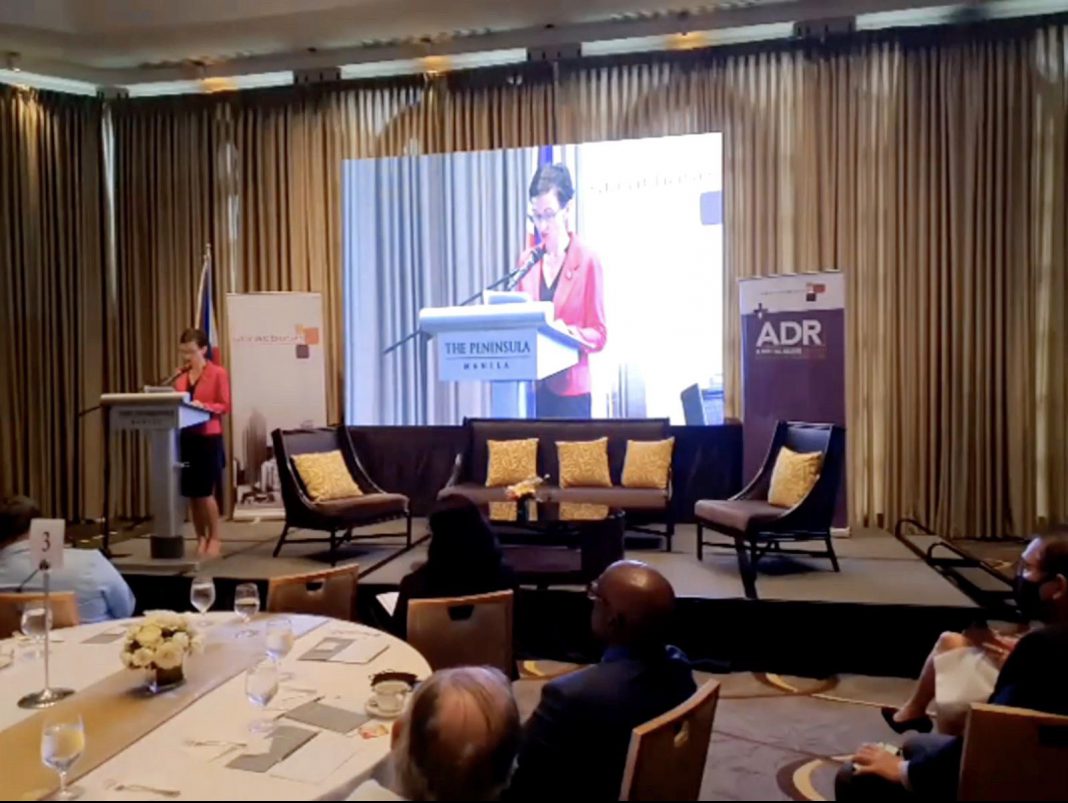 As the Philippines celebrates the 6th anniversary of the Hague ruling on the West Philippine Sea nullifying China’s “historical rights” to the West Philippine Sea which they claimed as part of their ” nine-dash line”, experts from foreign policy, international law, and maritime security experts gathered and discussed how our country can strengthen our capabilities to secure maritime jurisdiction and achieve stability in the Indo-Pacific region.

Speaking during the conference last July 12 at the “Redefining Maritime Cooperation in the Indo-Pacific in an Age of Uncertainty”, a Stratbase Albert del Rosario Institute international hybrid conference, Czech Ambassador to the Philippines Jana Šedivá underscored the importance of the Indo-Pacific region, not only to the EU but also to the world.

Ambassador Šedivá, took over the presidency of the European Union Council last July 1, succeeding France vowed that the EU will continue to protect and contribute to the stability of the Indo-pacific region.

“Let me start with a short explanation of the EU presidencies. Each Member State holds the presidency of the Council of the European Union for six months on a rotational basis. The presidency of the Council organizes and presides over meetings, adopts conclusions and ensures the coherency and continuity of the decision-making process and effective cooperation between all Member States,” she said.

Šedivá also presented why the Indo-Pacific region is of key strategic importance for Europe, both in geo-economic and geopolitical terms.

“Even being from a land-locked country, I can provide valuable input on the EU Indo-Pacific Strategy, defense cooperation, and maritime capacity building,” she added.

“Europe and the Indo-Pacific are highly interconnected. Some movie fans may still like the saying “What happens in Vegas stays in Vegas”. But we all know now that what may work well on the movie screen is not always the best guiding strategy,” said Ambassador Šedivá.

Šedivá also presented why the Indo-Pacific region is of key strategic importance for Europe, both in geo-economic and geopolitical terms.

She also discussed that through EU Indo-Pacific Strategy adopted by all 27 EU Member States last April 2021, the EU aims to contribute to the stability, security, and prosperity of the Indo-Pacific region, while promoting democracy, the rule of law, human rights and international law.EU also stresses theimportance of preserving “freedom of navigation”.

“We are deepening our engagement with Indo-Pacific partners to build more resilient and sustainable global value chains by diversifying our trade and economic relations, and by developing technological standards that are in line with our values and principles,’ she explained.

“Our commitment to the Indo-Pacific region is inclusive of all partners wishing to cooperate with the EU. We will deepen our engagement with like-minded partners that already have Indo-Pacific approaches of their own and shared principles, values, or mutual interests, she added.

During the conference, Ambassador Šedivá also identified what she called, “Regional hotspots” in the South and the East China Sea and also in the Taiwan Strait.

“The display of force and increasing tensions in the region may have a direct impact on European security and prosperity. The EU’s strategic engagement in the Indo-Pacific is designed to promote respect for international law and access to open markets. This will entail a further deepening and diversification of our trade and investment ties and collaboration to help accelerate the green and digital transitions, and spur innovation and connectivity,” she said.

“What happened in Ukraine, can also happen in the Indo-Pacific region”, she underscored.

Ambassador Šedivá also revealed that in the Indo-Pacific Ministerial Forum, held in Paris last February and High-Level Dialogue on Indo-Pacific held in Prague in June, the European Union’s partners welcomed its commitment to the region and reiterated the crucial importance of working together to maintain a free and open Indo-Pacific for all, in full respect of international law.

Enhancing Security and Defense in the Indo-Pacific

Already, the EU has been enhancing regional security, including secure sea lines of communication, capacity-building and enhanced naval presence in the Indo-Pacific with the increased participation of partners from the Indo-Pacific region including EU military and civilian Common Security and Defense Policy missions.

Šedivá also noted that last February, the EU announced the extension of the concept of a coordinated maritime presence (CMP) to the North-West Indian Ocean which allows the optimization of the use of assets that the EU Member States are deploying in the region while facilitating the exchange of information and enhancing maritime situational awareness.

While there have been concerted efforts from the EU partners on the EU Indo-Pacific strategy, Šedivá also revealed that some countries like France, The Netherlands and Germany adopted their national strategies on the Indo-Pacific an indication of how the Indo-Pacific region is very important in the intergovernmental process and she believes it will be adopted this year.

“The EU is usually not seen as a global actor in the Indo-Pacific. By assessing the EU´s strategic interests and vision that were revealed now, our Indo-Pacific strategy, as well as national strategies, intend to prove otherwise,” she said.

“What happened in Ukraine, can also happen in the Indo-Pacific region”, Ambassador Šedivá underscored.