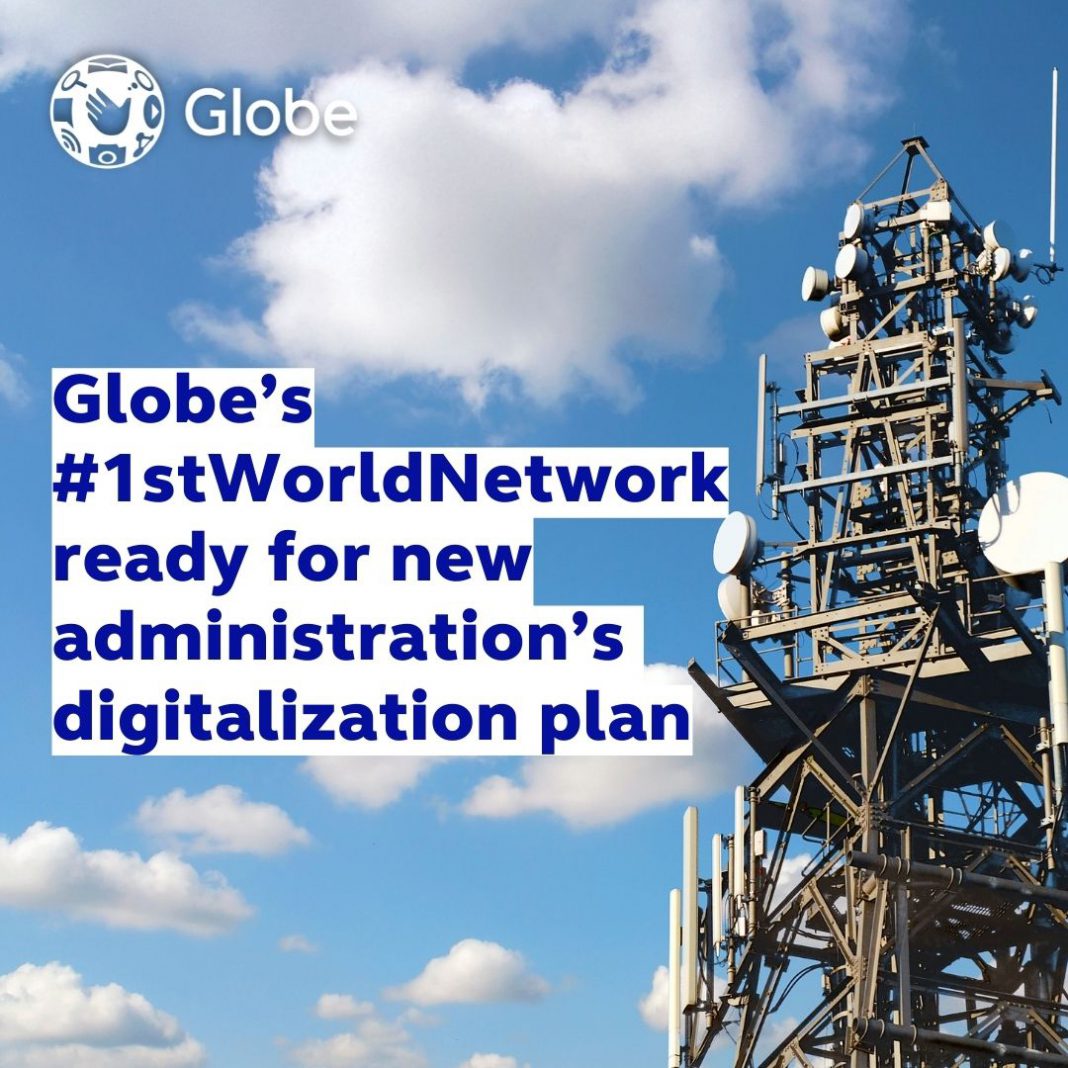 Leading digital solutions platform Globe fully supports the new administration’s goal of streamlining government service through digitalization, as it aims to deliver a #1stWorldNetwork and suite of digital solutions to enable such institutional pivot.

Globe, which has seen its own transformation to go beyond telco in recent years, stands ready to partner with the government with its top-of-the-line products and services to boost digitalization in state agencies and offices and give the public fast, convenient and reliable transactions.

“We welcome the new administration’s goal of increasing digitalization in government for streamlined processes. This will ultimately redound to improved public service– an aspiration that Globe deeply shares with the government as we serve a customer base of 92 million people,” said Globe President and CEO Ernest Cu.

“Our network and infrastructure are ready to support the government and we look forward to working closely with the new administration to achieve this shared goal,” he said.

The new administration earlier bared plans to streamline government operations to improve efficiency in public services, including business-related processes, to catch up with the rest of the world. This comes crucial at a time when the country is aiming for steady recovery following the economic lull wrought by the pandemic.

Globe has been supporting the country’s track towards economic rebound with an aggressive network buildup.

Enabled by a rationalized government permitting system, Globe built 234 more cell sites nationwide in the first quarter of the year, as it targets 1,700 new sites in FY 2022. A total 91 towerco sites also went on air and carried Globe traffic within the same quarter, 57% more than tower company builds in the same period last year.

Globe also upgraded over 3,500 mobile sites and installed 380 new 5G sites by the end of March, leading to an increase in ultra fast 5G mobile connectivity in more areas in the country.

The leader in mobile has logged over 2 million devices on 5G as of the first quarter, with at least 96% of the National Capital Region (NCR) and 85% of key cities in Visayas and Mindanao with Globe’s 5G outdoor coverage.

These improvements build on Globe’s infrastructure expansion in 2021, when an unprecedented CAPEX of P92.8 billion led to the rise of 1,407 new towers.

This network buildup is part of Globe’s long-standing commitment to the United Nations Sustainable Development Goals, which emphasize the role of innovation and infrastructure in development and economic growth.

Globe’s network expansion has led to its recognition as the Philippines’ Most Consistent Mobile Network by global analytics firm Ookla® and independent global standard Opensignal*.

Globe logged a nationwide Consistency Score™ of 79.45 from January to March 2022, a rise from 70.43 in the same period last year, based on Ookla® Speedtest Intelligence® data. This was also an improvement from 79.02 registered in Q4 2021.

Ookla’s mobile consistency score is determined by the number of user tests taken that are above a certain speed threshold. The higher the ﬁgures, the more likely for customers to enjoy acceptable Internet performance and quality.

Opensignal, meanwhile, recognized Globe for having the Most Consistent Mobile Quality in the Philippines, besting peers in the Excellent and Core Consistent Quality categories of the Opensignal Mobile Experience Awards*.

The independent global standard recognized Globe with the Excellent Consistent Quality award in its April 2022 Mobile Network Experience Report for the Philippines*, using data from January 1 to March 31 this year. Globe had a rating of 51.6 percent, 7.8 percentage points above the nearest competitor.

Globe was also No. 1 in Core Consistent Quality with 74.6 percent, outdoing the nearest competitor by 12.8 percentage points.

In fiber connectivity, Globe also ramped up its builds, increasing 64% in the first quarter of 2022 compared to the same period last year. At the same time, Globe provides its customers free migration to fiber to improve their Internet experience, leading to a 155% jump in Globe’s fiber broadband take up from January to March this year.

Most Consistent Mobile Networks in the Philippines:

in the Philippines for Q1 2022. Ookla trademarks used under license and reprinted with permission