Why Russia declared war on Ukraine? 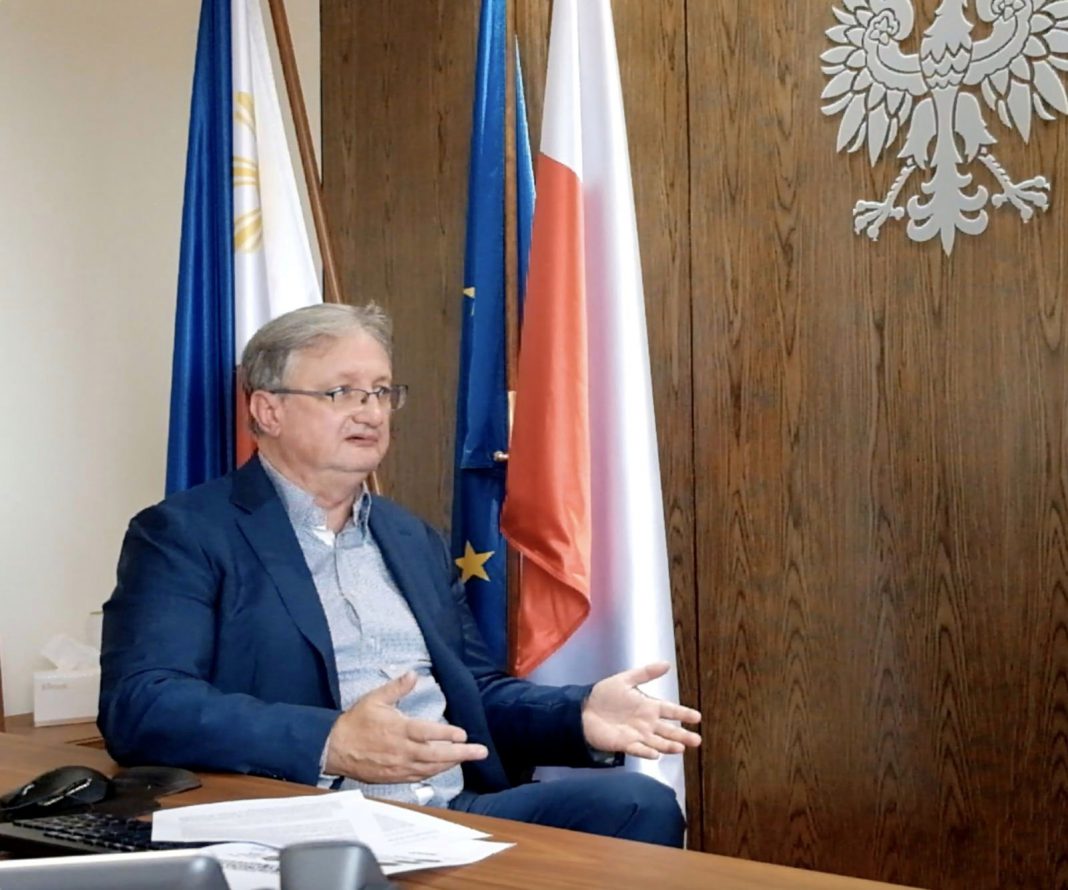 By Jarosław Szczepankiewicz
Chargé d’affaires a.i. of the Embassy of the Republic of Poland in Manila
File photo: THEPHILBIZNEWS/Manuel N. Roma, Jr.

The word “Ukrainian crisis” is misleading. After all, we deal with Russia’s unprovoked and unjustified military aggression against Ukraine, which is a flagrant violation of the prohibition on the use of force under the Charter of the United Nations. Russia has broken one of the most fundamental principles of international law by directly threatening the security and stability in Europe and in the world. Russia is a permanent member of the UN Security Council and should uphold the United Nations Charter. Meanwhile, Russia attacked Ukraine in an attempt to seize land, power and property – as in a colonial-type war.

Russia is clearly interfering in the ongoing democratization process in Ukraine by brutal military aggression and annexing part of its territories. Its actions have the potential to spark an arms race in Europe and globally. The role of sanctions and their impact on debt and trade is a crucial element in the broader attempt to stop Putin. Russia’s threats to use chemical, biological and even nuclear weapons could lead to heinous acts of violence that make future peace difficult to achieve.

To understand Russia’s decision, we must understand Putin’s motivations. In the line of Putin’s thoughts, Russia has become great power not only because it has had great economic and scientific achievements, but also because it won a great victory over the Third Reich. However, Russia won it in the alliance with the United States, Great Britain (as part of the Big Three) and the rest of the Allies, including Poland.

Russia strives to restore its status as one of the global powers. By 2014, Russia saw itself in the contemporary Big Trinity along with the United States and the European Union. Over time, Moscow considered the last one subordinate to the United States as part of the so-called “collective West” – as China emerged in the capacity of the third main partner of the new world configuration.  In American perception, China became the main rival and threat. On the other hand, the United States remained for Russia as the main potential rival – and at the same time a threat. Not without significance in the selection of the moment of an armed assault on Ukraine was the fact that the entire Kremlin elite was always ached to determine Russia as the power of the second category – a regional power. Putin was particularly offended when he heard from Barack Obama stating that Russia “of course” has the status of a regional power.  The Kremlin recognized this as an attempt to redefine the role of Russia in the world – as a state that no longer has to decide on the global matters and plays only a role in its region. A complex of many autocrats and dictators speaks here. They often feel a huge need not only to exercise leadership internally, but also to look for a confirmation of it in the eyes of the world.

Moscow’s decision targeting Ukraine results in a much greater extent from the situation in Russia itself than from the situation in Ukraine. Former US National Security Advisor Zbigniew Brzeziński believed that Ukraine, subject to Moscow, had been the main condition for the existence of the Russian empire.  A democratic Ukraine would end Putin’s dreams of rebuilding the Russian empire.

During the first governments of Putin, and then during Medvedev’s presidency, almost every Russian program and strategic document in their conclusions ended with the need for modernization. After 2012, this word suddenly disappeared from public speeches and documents. This word was replaced with another concept that has never been spoken loudly – namely, “militarization”, or a straightening a military-industrial complex. Modernization requires deep reforms and it would force Moscow to abandon central manual management and bureaucratic control processes, so typical for the former Soviet economy. Modernization in Russia failed, but militarization turned out to be successful. Putin opposed an idea of vertical power- based on centralized and hierarchical authority implemented by special services, army and other uniformed services – to horizontal power – based on democracy and economic liberalism.

Against the wish of Kremlin, Ukraine entered into the formation process of horizontal power – the path of liberal and democratic changes. The Ukrainian democracy is still quite weak because of the “oligarchization” of power so characteristic of almost all former Soviet republics and parts of the countries of the former East Camp.

Nevertheless, the adoption of a democratic model meant that potential chances of regaining control over Ukraine began to drift away from Putin’s hand. In a country that operates according to democratic standards, it is impossible for Moscow to install the “vertical power” system, which could be a minor copy of the Kremlin system. It is an obvious challenge for authoritarian power in Russia and the next reason why Putin decided to settle a puppet government in Kiev. Moreover, he would be ready to defend such power in Ukraine, as he does in Belarus with Aleksandr Lukashenko’s regime. Probably he would be personally happy if he had this kind of satrap ruled in Kiev after the end of the “small winning war” that would bring Russian president another victory in the elections of 2024.

Russia has been convinced that it has an advantage in the sphere of the latest technologies. Putin and his surroundings know that Americans eliminate this advantage soon in the arm race. In this short window in time, Russia decided to resort to the threat of using nuclear charges against enemies but Moscow knows that that threat can never be used in practice because both sides want to avoid what was called in the times of the Cold War Mutual Assured Destruction (MAD). Therefore, this is an advantage used as an element of political blackmail, and not used in practice on the battlefield. Therefore, with pride and a sense of triumphalism, Putin and his generals announced that Russia had reached the ability to build hypersonic weapons – that is, technology, thanks to which a nuclear weapon of a ballistic missile can fly a distance of 5 thousand kilometers in just a dozen or twenty minutes. This joy comes from the fact that for the first time in history, Russia managed to get a strategic advantage over the United States and all other countries in the world.

Not without significance in the selection of the moment of aggression were also the assessment of the weaknesses of the western world leadership: UN system and in particular the underestimation of the United States President and the expectation that the free world would not be unable to demonstrate the unity, solidarity and the ability to quickly make decisions.

Why this aggression is so popular in Russia?

Majority of the Russians embraced enthusiastically Putin’s demand for “dignity and recognition” of Russia as a superpower and his repeated claiming “they will start to respect us again when they are afraid” and gave Putin a green light for the “special operation”.

Overwhelming governmental disinformation and propaganda in Russia including disturbing information space, brainwashing minds, and corrupting human values and principles of the traditional Russian society remain one of the powerful tools in Russia’s arsenal in justifying the aggression. Russia’s leadership has so “successfully” poisoned the minds of Russians that for many of them the process of democratization and the pro-European course of Ukraine has become synonymous with “Nazism”. Kremlin applies pure military censorship. Russia’s Ministry of Defence is the only one source of information about the military operation of the Russian army in Ukraine. The administrative censorship laws threaten those who are accused of discrediting the Russian armed forces or call for sanctions with stiff fines followed by jail time up to 15 years in prison. More than 300 Russians have been charged in the past month under those laws that silence critics of Vladimir Putin’s invasion of Ukraine.

Russians have aspects of identity that they do not like and choose to reject and repress to avoid the anxiety. Kremlin uses this defense mechanism in disinformation and propaganda in blaming its own past and present illegal and destructive wrongdoings on other nations. This helps to soothe the remorse of the Russians.

What with the Philippines?

Russia’s war in Ukraine has global repercussions but in the Philippines, there is a natural tendency to see Europe and the Indo-Pacific or Asia as completely separate areas, because they are far away from the conflict scene and the war takes place in a cultural space that is alien from their perspective. Many politicians still embraced the 19th century’s concept that large states still have the right to have a sphere of influence and that full independence for smaller units is not a realistic option. They view Ukraine as a rebellious province because it is a former part of the USSR. In fact, however, Europe and Asia are interconnected to such an extent that they often constitute one area, including building and supporting the principles of global order. Additionally, the war in Ukraine is a warning to other countries in the region in the context of potential operations that would be similarly destabilizing and destructive.

Next regional strategic concepts must reflect this new security reality. It needs to seek connections between the EU, the US and other like-minded partners to face the fundamental challenges in the South China Sea – those of a technological, commercial, political, diplomatic and security dimension.

Any passivity in condemning Russia’s breach of fundamental principles of international law is a direct threat to security and stability in Asia as well. It creates a very dangerous legal precedent, notably for any assertive power that has repeatedly pushed for its own interpretations of international law, most clearly in the South China Sea. Neutrality is not a political option to comfortably close the eyes when a stronger state aggresses a weaker one. ASEAN’s response to the war in Ukraine showed unprecedented solidarity between the EU, the US and other partners in Southeast Asia. In the case of ASEAN countries, these commitment and solidarity are often uncoordinated and result from individual actions of the countries themselves, but not from the Organization as such.

The Philippines explicitly condemned the invasion of Ukraine. The attitude of the Ukrainians, their incredible hope of freedom and independence in challenging the imperialism of greater power inspires many Filipinos today. Personal charisma of Ukrainian President Volodymyr Zeleński echoes the same heroism of the Philippine national hero, Dr Jose P. Rizal.