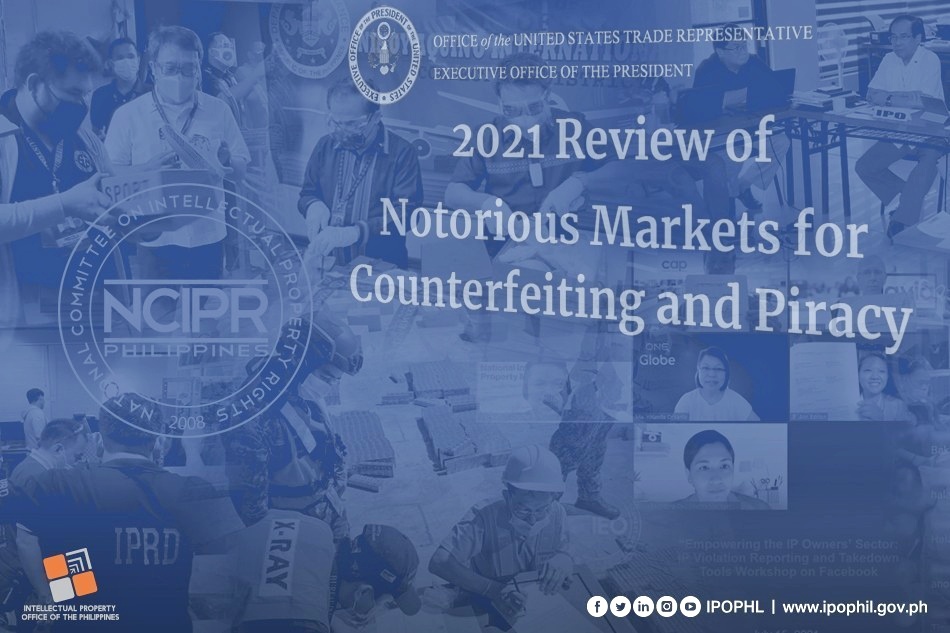 The United States Trade Representative (USTR) has recognized the National Committee on Intellectual Property Rights (NCIPR) for its sustained and renewed enforcement efforts despite challenges to conduct raids and the increased piracy and counterfeiting — particularly of pharmaceuticals and medical products — during the pandemic.

In the USTR’s newly released 2021 Notorious Markets List, only the Philippines and four other countries were highlighted for “positive developments” in anti-counterfeit actions by the government.

The Bureau of Customs, a member of the NCIPR which is led by the Intellectual Property Office of the Philippines (IPOPHL), was noted for its seizure of counterfeit medicine and personal protective equipment in Manila, as well as a substantial amount of counterfeit luxury goods in Pasay.

The USTR also cited some critical partnerships that IPOPHL sealed last year, such as with the International Trademark Association and the Asia Video Industry Association, to curb counterfeiting and piracy, respectively.

It also mentioned IPOPHL’s contribution in making possible the landmark memorandum of understanding (MOU) between brand owners and e-commerce platforms Lazada and Shopee. The MOU establishes a notice-and-takedown procedure and a feedback mechanism for right holders.

“The United States commends these efforts and encourages governments, right holders, service providers, and the owners and operators of these and other markets, including those newly identified in the 2021 NML, to engage in sustained and meaningful efforts to combat piracy and counterfeiting,” the USTR report read.

“We are delighted especially as this comes at a time enforcement authorities are faced with new challenges. The pandemic and the subsequent e-commerce boom has brought a wave of online counterfeiting and piracy activities that is becoming our new normal,” Barba said.

“More work is surely ahead but this only motivates us to beef up our enforcement efforts and innovate in our approaches, in order to continue positioning the country as a place where IP investments are valued and protected,” he added.

However, the USTR report remained to include the Greenhills Shopping Center as one of the 35 notorious physical markets for counterfeit goods in 2021. The mall has long been on the list for selling fake electronics, perfumes, watches, shoes, accessories and fashion items.

Nevertheless, the USTR recognized the Philippine government’s efforts to curb counterfeiting in the San Juan-based mall, particularly through an enforcement and monitoring agreement with the local government and the creation of a working group composed of various agencies from the NCIPR and the Department of Information and Communications Technology.

“We recently formed within the NCIPR a technical working group that is specifically tasked to address issues with Greenhills. We are considering new approaches and  efforts in institutionalizing IP respect in the mall, from the seller-community up to top-level management, to see its culture changed for the better,” IPOPHL Deputy Director General Teodoro C. Pascua said.

The Notorious Markets List is an annual list released by the USTR since 2011. It highlights online and physical markets that reportedly engage in or facilitate substantial trademark counterfeiting or copyright piracy, and aims to help market operators and governments protect IPs of American businesses.