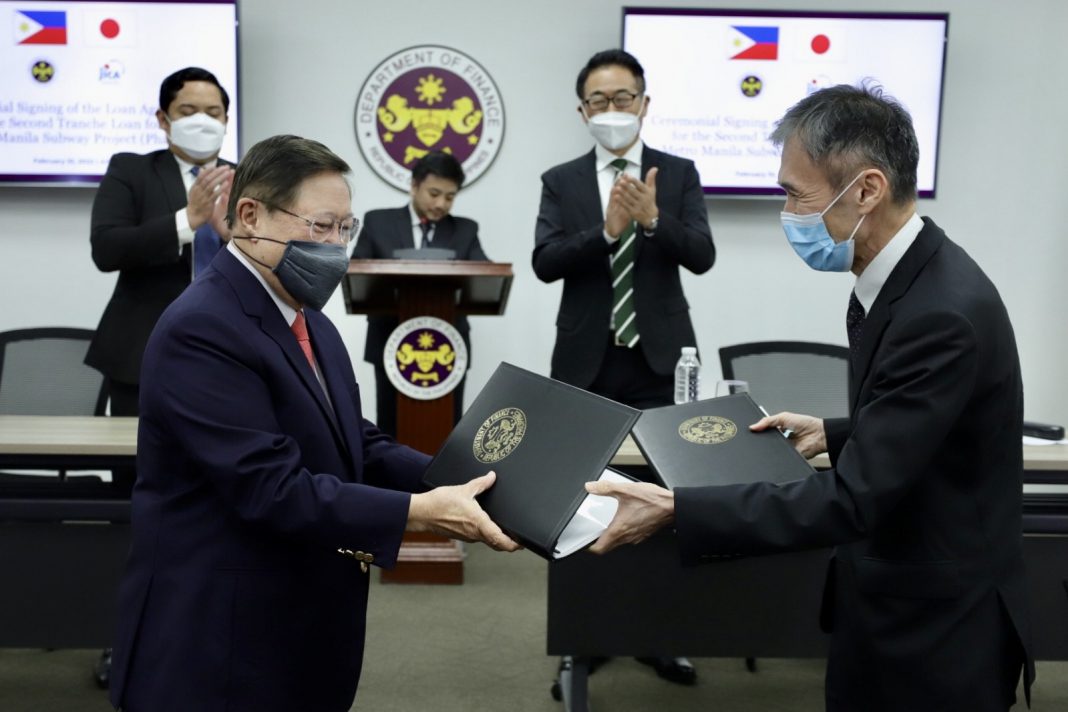 In photo: Finance Secretary Carlos Dominguez, on behalf of the Philippine Government, and Japan International Cooperation Agency (JICA) Chief Representative Eigo Azukizawa, on behalf of the Government of Japan, signed the JPY 253.31 billion (about P112.87 billion or US$2.2 billion) 2nd tranche funding for the construction of the Metro Manila Subway Project on Thursday (February 10) at the Department of Finance (DOF) Building in Roxas Blvd. Manila. Also present at the signing ceremony were Japan Ambassador to the Philippines Kazuhiko Koshikawa and Transportation Undersecretary for Railways Timothy John Batan.

The Philippines and Japan signed today, a JPY 253.31 billion loan agreement on the latter’s 2nd tranche funding for the construction of the Metro Manila Subway Project.

Finance Secretary Carlos Dominguez III, on behalf of the Philippine government, and Mr. Eigo Azukizawa, the Chief Representative of the Japan International Cooperation Agency (JICA), signed the loan accord for the Philippines’ first-ever underground railway.

Also present at the signing ceremony was Japan Ambassador to the Philippines Kazuhiko Koshikawa and Transportation Undersecretary for Railways Timothy John Batan.

Secretary Dominguez thanked the government and people of Japan for continuing to extend financial support for  the construction of the Metro Manila Subway, which is one of the flagship projects under President Duterte’s signature program “Build, Build, Build.”

The second tranche loan (about P112.87 billion or US$2.2 billion) extended by Japan for the project is payable in 27 years with a grace period of 13 years, for a total maturity period of 40 years.

This loan agreement follows the earlier accord signed on March 16, 2018 between the Philippines and Japan for the subway project’s  1st tranche loan of JPY 104.53 billion (about P47.58 billion or US$933.73 million), which also has a 40-year total maturity period.

The National Economic and Development Authority (NEDA) Board chaired by the President approved the revised total project cost of P488.48 billion (approximately JPY1.08 trillion or US$9.58 billion)  for the Metro Manila Subway on Sept. 23 last year.

Utilizing cutting-edge Japanese tunneling technology, the Metro Manila Subway involves the construction of a 27.5 kilometer (km) railway line from Valenzuela in Bulacan to Bicutan in Taguig City and the  NAIA Terminal 3 in Pasay City with a 33.1-km electromechanical system.

The project would also cover the physical integration segment with the North-South Commuter Railway (NSCR) System (i.e., FTI to Bicutan). It also involves the construction of a depot and 17 stations (two of which will be constructed through a separate loan under the NSCR System), and the procurement of 30 train sets.

For the remaining three to four tranches of the total loan, JICA will release the funds based on the project requirements and will be subject to further discussions between JICA and the Department of Transportation (DOTr), the project’s chief implementing agency.

The preparation of the detailed engineering design and bidding documents for the project started in November 2017, financed by a grant from JICA.

In January 2018, the DOTr and JICA also signed a grant-financed technical cooperation agreement for the establishment of the DOTR Railway Office, which is intended to support capacity building for the operation and maintenance of both the Philippines’ current and new railway systems.