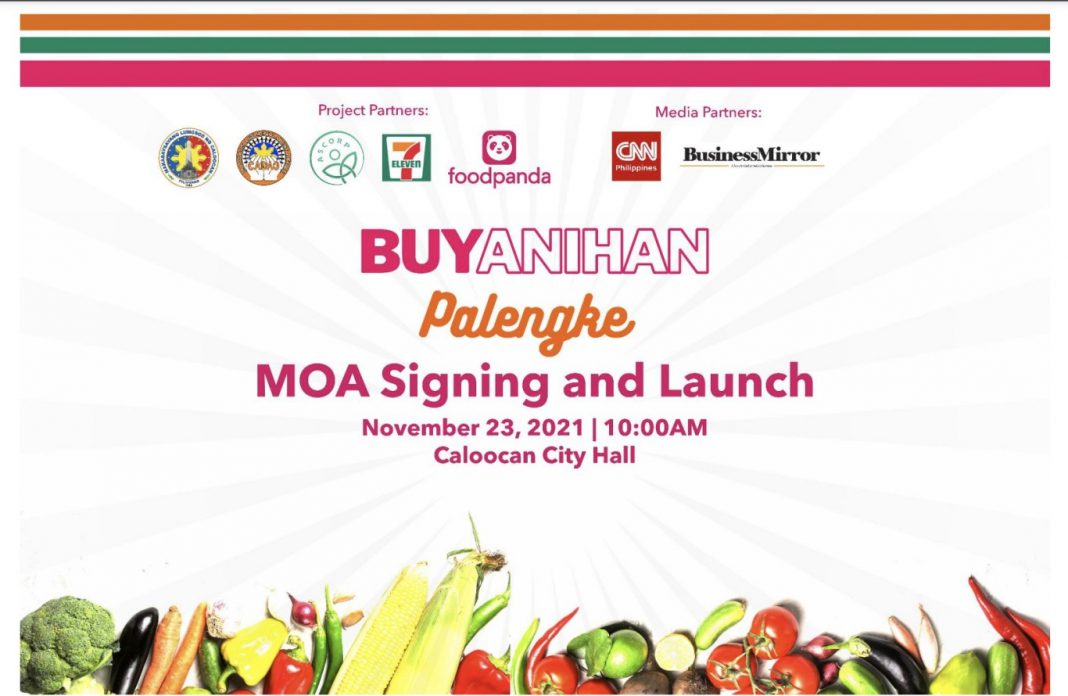 The BuyAnihan Palengke project seeks to provide a source of income for underserved sectors including those who lost their jobs during the pandemic.

Representatives of foodpanda PH, a leading online food and goods delivery and quick commerce platform provider, and Philippine Seven, which operates the 24-hour 7-11 retail stores nationwide, signed an agreement with Caloocan City, which would serve as a pilot area for the BuyAnihan Palengke.

BuyAnihan would link up beneficiaries with sources of agricultural produce which they could resell.

The project’s target beneficiaries include drug rehabilitation graduates of CADAO and Diocese of Caloocan programs, who are now being cared for by BuyAnihan’s precursor program, Salubong Carrots Atbp, of the city government and the diocese.

Also signing the agreement were Dr. Angelita Catedral of the Asian Society of Community Rehab Practitioners (ASCORP) and a representative from the Caloocan diocese involved in Salubong Carrots.

Marogy said one of the objectives of BuyAnihan is to provide a source of income to its beneficiaries including families of foodpanda riders and those who lost their jobs during the pandemic such as former OFWs, out of school youths and solo parents.

“We want to build their confidence and lead them towards the path of financial independence,” Marogy said.

Paterno, Philippine Seven CEO, on the other hand added that BuyAnihan intends to pave the way for reformed drug dependents / drug rehab graduates to be productive members of society.

Representative Malapitan vowed to support the BuyAnihan Palengke program, saying Foodpanda and Philippine Seven were showing the way forward for other companies. “I wish more companies would follow suit and align their CSR projects with the needs of our communities and marginalized sectors,” said Malapitan.

BuyAnihan’s aim was three-pronged: Provide a source of income for the underserved, provide decent profit margins to farmers and give consumers direct access to fresh farm produce at affordable prices, Marogy said.

Paterno said his company welcomed the chance to make a difference in the lives of the poor who were stricken hard by the pandemic.

“Our trucks travel all over the country and it would be an honor for our company to be able to use our logistics chain to help,” Paterno said.

Under the MOA, foodpanda will provide seed capital for beneficiaries to jumpstart their reselling business while 7-11 will use its trucks to pick up fruits and vegetables directly from farms for delivery to BuyAnihan Palengke hubs in Caloocan City and, soon, in other parts of Metro Manila.

ASCORP will implement the program in close coordination with the city government and also manage funds from foodpanda to jumpstart it. It will work closely with CADAO to identify beneficiaries among reformed drug dependents and train them.

One of the reformed drug dependents being given hope is Meredith Mendoza, 39.

She said she saw BuyAnihan Palengke as a chance to pay back the community that has opened doors for her. She started to use drugs in 1998 which landed her in jail for two weeks in Caloocan. After getting married, she and her husband moved to Nueva Ecija to grow and sell vegetables for seven years. But a series of tragedies, including the deaths of her husband and their first child, led Meredith to depression and ultimately back to using drugs.

Meredith went in and out of broken relationships, rearing children out of wedlock and getting arrested for drug use. A former live-in partner was killed by police while she was in jail, which made her see that drugs would harm not only her but her children, too.

Today, Meredith is completely drug-free and reports to the diocese regularly as part of the Salubong ng Carrots Atbp aftercare program. She is one of several other drug rehab graduates who will join BuyAnihan Palengke as a community reseller.

Dr. Ponch Villaroman, chief of the rehab center in Bicutan, lauded the initiative. “We need more aftercare programs and livelihood projects like BuyAnihan Palengke because it helps bring back former drug dependents to the folds of society,” he said.