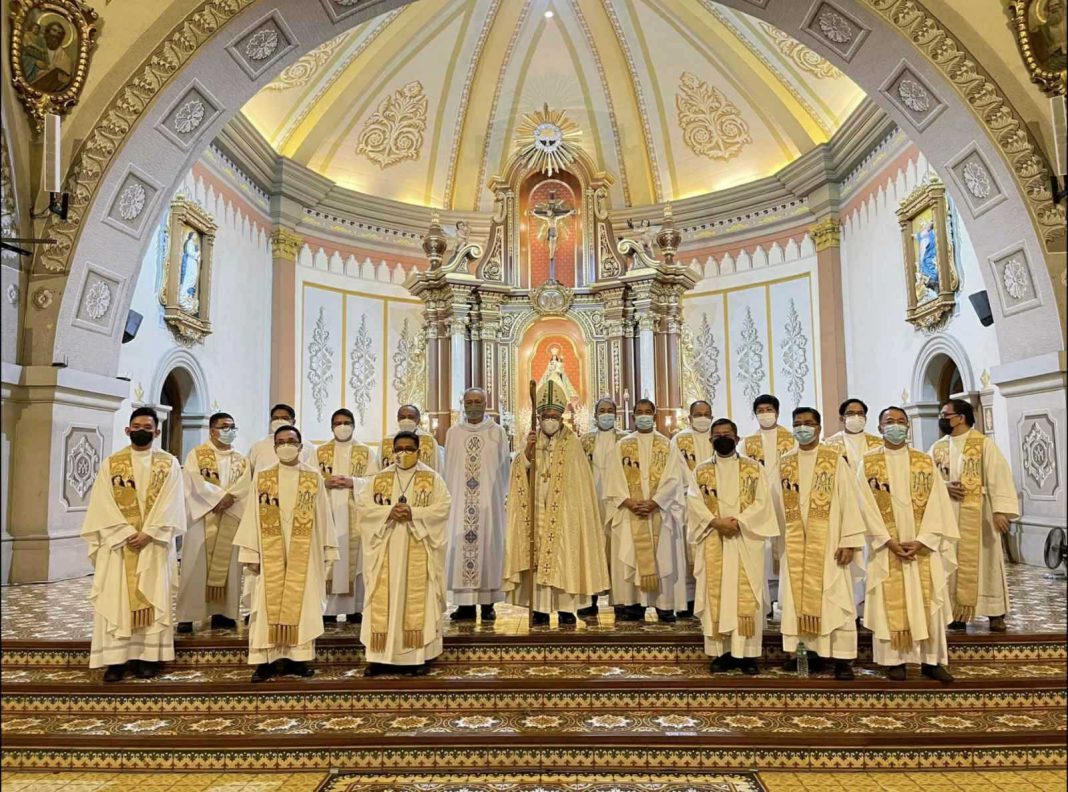 Photo shows priests converge at the Our Lady of the Abandoned Churchin Marikina City (Photo courtesy of Fr. Giovanni Yago)

Members of the clergy are pleading to senators to buck all attempts to railroad the bill legalizing electronic sabong (cockfighting) or e-sabong, which has the potential to tear Filipino families apart.

The leaders of the Catholic Church came out to express their collective disgust and opposition to the e-sabong bill even as Senator Grace Poe’s Public Services Committee scheduled a hearing to tackle the injurious measure this week.

Valles said the enactment of the bill will promote the attitude that it is all right to use much needed money in the family, among the many poor families in the Philippines, for the purpose of gambling.

Talibon Bishop Patrick Daniel Parcon, CBCP regional representative of Central-Eastern Visayas, reckoned that any form of gambling is unacceptable. “Even minor will delve into cockfighting. I heard even as early as grade six will go online. Online games are addictive,” he said in Bisaya.

Bishop Antonietto Cabahug, former CBCP secretary general, said: “Gambling money should come from excess, not to fuel ‘swerte’ mentality to use money for rice and groceries hoping to win and get more. Instead, the loss makes one poorer. Poverty should be solved with economic means, not gambling.”

Meanwhile, Bishop Alberto Uy of the Diocese of Tagbilaran stressed the threat posed by e-sabong to Filipino families, the most important unit of Philippine society.

“Online sabong will wreck families, incite crimes, and corrupt society. Reportedly, many young people and overseas workers are already addicted to it. You can just imagine how many families will be seriously disturbed by this form of gambling,” Uy said, warning the country of the big moral catastrophe confronting it.

Uy described e-sabong as worse than Sunday sabong, since betting could be done on a daily basis, and it would be open to all regardless of age. He said this will encourage young people to gamble, and since they don’t have earnings yet, they will be tempted to steal money from their parents or elders at home.

Bishop Crispin Varquez of Borongan, Samar, echoed the opposition expressed by his fellow clergymen, saying online sabong will end up further burying poor Filipinos in debt due to its addictive nature.

For his part, former AGHAM party-list congressman Angelo Palmones said the senators shouldn’t emulate their House of Representatives counterparts who “shamelessly welcomed the evils of gambling, instead of resist it.”

“They should take the high road and not railroad the e-sabong bill. The future of countless families are at stake here,” Palmones said.

He was referring to the hastened passage of House Bill (HB) No.10199, or the proposed “Act granting Lucky 8 Star Quest Inc. a franchise to operate offsite betting activities on duly-licensed cockfighting, derbies, and other similar activities through online or other modern means, anywhere in the Philippines.” The measure is now up for consideration in the Senate.

Palmones noted that Lucky 8 is a company owned by ex-convict Charlie “Atong” Ang, which by itself is enough to raise eyebrows.

As such, the former congressman found it quite disturbing that Poe’s committee has scheduled a hearing on the e-sabong bill this coming Friday, Nov. 19, right in the middle of budget season in the Senate.

“E-sabong bill is now a priority measure?” Palmones asked as a challenge to Poe. “The last time I checked we were still in the COVID-19 pandemic.”

Traditionally no hearings are held by the committees during the passage of the national budget, unless it is about a very important measure.