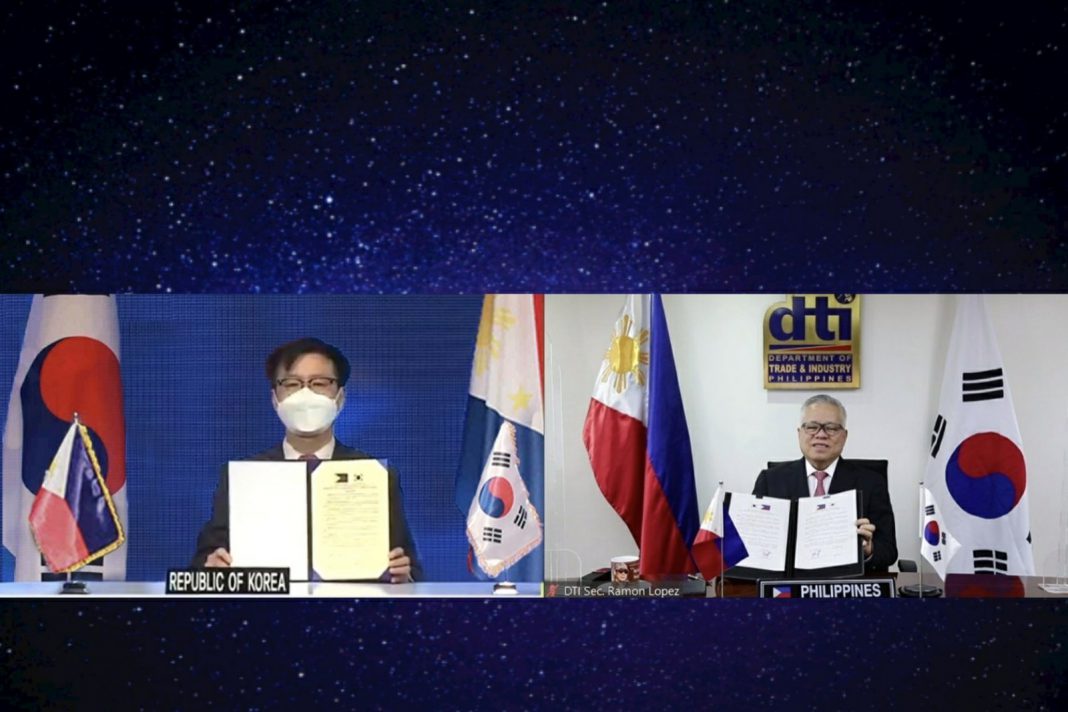 The two Ministers formally signed and issued a joint statement prior to the ASEAN-Korea Summit on 26 October 2021. In the statement, both parties announced the conclusion of the negotiations and acknowledged that the FTA will help contribute to the economic recovery efforts of the Philippines and Korea.

“We are glad that our trade negotiations with South Korea have come to fruition. We also thank Minister Yeo and the Ministry of Trade, Industry and Energy (MOTIE) for their continued collaboration in facilitating wider economic cooperation with our Philippine trade department,” Department of Trade and Industry (DTI) Secretary Lopez said.

It can be recalled that the negotiations commenced on 3 June 2019 in Seoul, South Korea, which were influenced by the initiative of President Rodrigo R. Duterte. The Philippines and Korea shared a common goal to achieve a comprehensive and future-oriented FTA.

In November 2019, the Philippines and Korea signed the Early Achievement Package that confirmed the agreement of both sides to lock in the list of already offered at the time. Taking off from the said achievement package, the two countries finally resolved outstanding issues that led to the conclusion of the negotiations.

Legal scrubbing likewise commenced on chapter texts of the Agreement, namely: Trade in Goods, Trade Remedies, Customs Procedures and Trade Facilitation, Rules of Origin, Competition, and Chapters under Legal and Institutional Issues (i.e., General Provisions, Transparency, Institutional Arrangements, Final Provisions, Exceptions, and Dispute Settlement). The Trade in Services and Investment chapters will be covered by a work program for future negotiations. Meanwhile, the Trade in Goods and Economic and Technical Cooperation chapters are set to be finalized by both sides with a view to ensure a closer collaboration towards a robust post-pandemic recovery.

The final negotiations focused on market access for Philippine banana exports and for Korean automotive units and parts. The Philippines was also able to secure tariff elimination for bananas, which was previously excluded under the ASEAN-Korea FTA  Likewise, the discussions allowed for an improved tariff treatment for processed pineapples, as compared to the Regional Comprehensive Economic Partnership (RCEP) concessions.

According to Trade Secretary Lopez, with the RCEP agreement complemented by this bilateral FTA with Korea, the trade value of Philippine exports to Korea will now be substantially covered. Hence, it will make the Philippine exports competitive in the said market.

Once enforced, the FTA with South Korea will be an important vehicle for enhancing trade flows, and generating more investment and employment opportunities in the process.