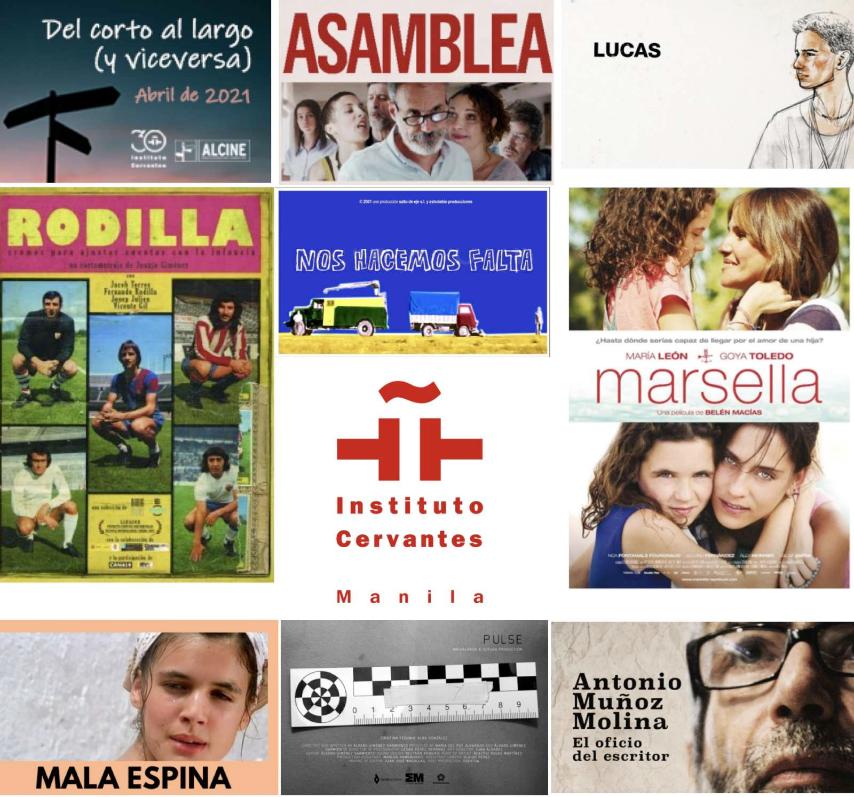 This April, Instituto Cervantes de Manila will screen online the work of four contemporary Spanish filmmakers. The film series “Del corto al largo” will be streaming two works (a short and a feature film) by each of the selected filmmakers: directors, Álex Montoya, Belén Macías and Juanjo Giménez, and the producer María del Puy Alvarado.

The films will be shown through the Instituto Cervantes channel on the Vimeo platform (vimeo.com/institutocervantes) and will be freely accessible for 48 hours from their start date and time.

The series, which comprises of eight films, will kick off on April 7, Wednesday, at 2AM with the online screening of Lucas, directed by Alex Montoya in 2016. Available anytime for 48 hours, the short can be watched for free and with English subtitles through this link: https://vimeo.com/519053672.

Enjoy the weekend watching the comedy Asamblea, directed by Alex Montoya in 2018. It is an interesting work of adaptation of the play “La gente”, by Juli Disla and Jaume Pérez, also screenwriters of the film. The emergence of assembly groups after the political movements after 2011 served their authors to cast a comic look at decision-making processes and the capacity for dialogue of the human being. The movie will be available on April 10 & 11, and will be accessible through this link: https://vimeo.com/518996347

The film cycle will continue on April 14, Wednesday, with Mala espina (2001), a short film by Belén Macías, which tells the summer story of a teenage girl who lives a huge conflict with her elders. Mala espina can be seen free on April 14 & 15 by clicking this link: https://vimeo.com/519059285

The same week, on April 17 & 18, Belén Macías’ feature film Marsella (2013) shows a dramatic duel between its two protagonists, Goya Toledo and María León, both in a true state of acting grace.

The third filmmaker on focus will be Juanjo Giménez. On April 21 & 22, Wednesday, Instituto Cervantes will offer the free online screening of Rodilla (2009), a short film about the world of soccer, the passions it arouses and the emotional universe that it means for many people.

It will be followed on April 24 & 25 by Juanjo Giménez’s feature film Nos hacemos falta (2001), a peculiar road-movie that tells the encounter between different antiheroes.

Finally, the series will close with two samples of producer María del Puy Alvarado’s work. Her trajectory has touched almost every gender. A fine proof is given by the short film Pulse (2013), a thriller set in Ukraine but shot in Madrid, which tackles one of the many crimes that are unfortunately perpetrated around the world against adolescents.

The closing movie of the cycle, Antonio Muñoz Molina, el oficio de escritor (2014), will be streamed on May 1 & 2. With it, María del Puy Alvarado faced the proposal to produce a documentary about the writer Antonio Muñoz Molina, to give an account of the main creators of Spanish culture.

The films, presented by Instituto Cervantes in collaboration with ALCINE, the Alcalá de Henares Film Festival (Spain), and the Embassy of Spain in the Philippines, will be in Spanish with English subtitles. Admission is free. For further information on this film series, please check out the event page on Instituto Cervantes de Manila Facebook site: https://www.facebook.com/events/355457229118138