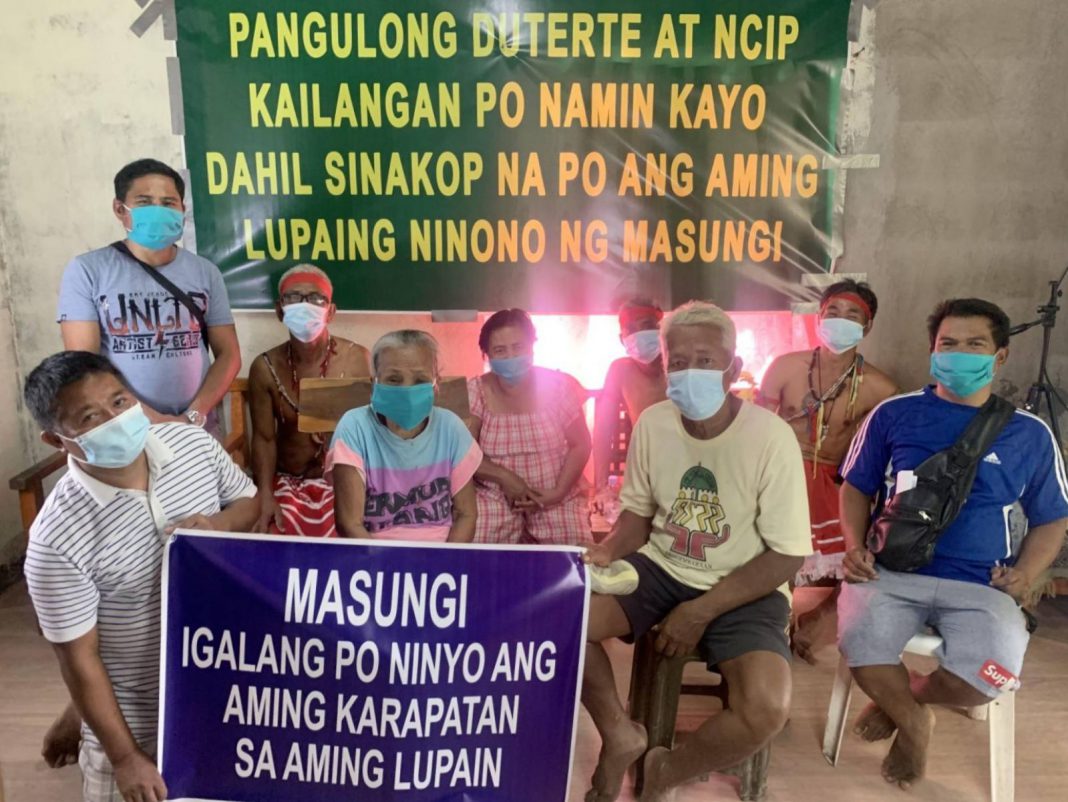 In photo: The officers of the Dumagats in Antipolo during the press conference

The tribal leaders of the Kaksaan Ne Dumaget De Antipolo Inc. criticized the officials of the Masungi Georeserve headed by Benjamin Dumaliang, President of the Blue Star Construction and Development Corp. and operator of Masungi for maliciously accusing them of land grabbers, squatters, and illegal loggers and the caused of the recent flood in Marikina at the height of typhoon Ulysses/

During the virtual press conference, tribal chieftain Ernesto Doroteo, a Bayaning Filipino Awardee in 2006 who did not hide his disappointment and anger said, “Masungi is lying. They are the ones together with the military, who forcefully intruded into our property and fenced it off as part of the Masungi last October 2020. Had not Retired Gen. Luizo Ticman intervened since the early 1990’s, we would have lost by force most of our ancestral homeland.”

Meanwhile, Enrico Vertudez, Kaksaan president; Alex Bendaña, chieftain; and the security guards of the Dumagats corroborated the statement made by Doroteo as they showed the map of their ancestral domain and the areas intruded and fenced off by Masungi, which includes their Sacred Grounds.

Doroteo revealed that the Dumagats and Ticman have long been partners and harmoniously working together to conserve and protect the environment of their homeland through livelihood projects since the 1990’s, and now, through the leadership and assistance of the latter’s daughter, Loise Ticman.

He said they formally approached Ticman last 2019 for more help in developing their land sustainably, which resulted in the project called Sustainable Integrated Development Plan (SIDP). He added: “Gen. Ticman is a very kind and honorable man. We hope that there will be more like him in our society who treats us like his family.”

“Through the media, we are seeking the help of President Duterte and the National Commission on Indigenous People (NCIP) and DENR to uphold the rule of law and not to believe the lies peddled by Masungi. We, as the legal and real stakeholders, are culturally and legally-bound to preserve and conserve our ancestral domain,” stressed Reynaldo Doroteo, chairman of the Kaksaan.

Loise Ticman, Rublou Market Place Greenland CSR director and project director of the SIDP, explained that she has since replaced her father in the projects for the Dumagats. The SIDP focuses on sustainable livelihood projects, reforestation, and protection and conservation of the environment & the watershed. Then a police major in Rizal in the 1990’s, her father, she said, was sought for help by the Dumagats. Through the years, they became friends and allies against land grabbers, intruders and illegal activities in the area, she narrated.

For his part Attorney Juancho Botor, the counsel for the Dumagats stated that charges in court will be filed against the Masungi for forcefully and illegally intruding the Dumagats’ ancestral domain. He further explained that a mere Memorandum of Agreement between Dumaliang and the DENR in 2017 cannot supersede the RA 8371 or the IPRA Law of 1997 that protects the rights of the indigenous people.

The Dumagats have been issued their Certificate of Ancestral Domain Title (CADT) which defines the borders of their ancestral domain. Under the same law and RA 11038, or the National Integrated Protected Areas System (NIPAS), the Dumagats are given the authority to protect, preserve, and conserve the forest and the watershed within their ancestral domain, he said.

“Definitely, their ancestral domain is not and cannot be part of the Masungi, notwithstanding that the two distinct lands are bounded by a wide highway,” Botor pointed out.

Published records showed that in 2016 the municipal government of Tanay ordered the suspension of the operations of the Masungi for alleged various violations and over charging of more than 100% entrance fee to tourists and guests. It is unknown what happened to the order, while Masungi attacked the Tanay government, particularly its mayor, through libelous postings that they are alleged protectors of landgrabbers.

On the same year, Masungi, led by Dumaliang, figured in a 30-minute gunfight with the elements of the Philippine Army’s 80th Infantry Battalion when apprehended for carrying firearms during an election gun ban. Dumaliang and his men were charged by the Army with frustrated murder before the Rizal Prosecutors’ Office.