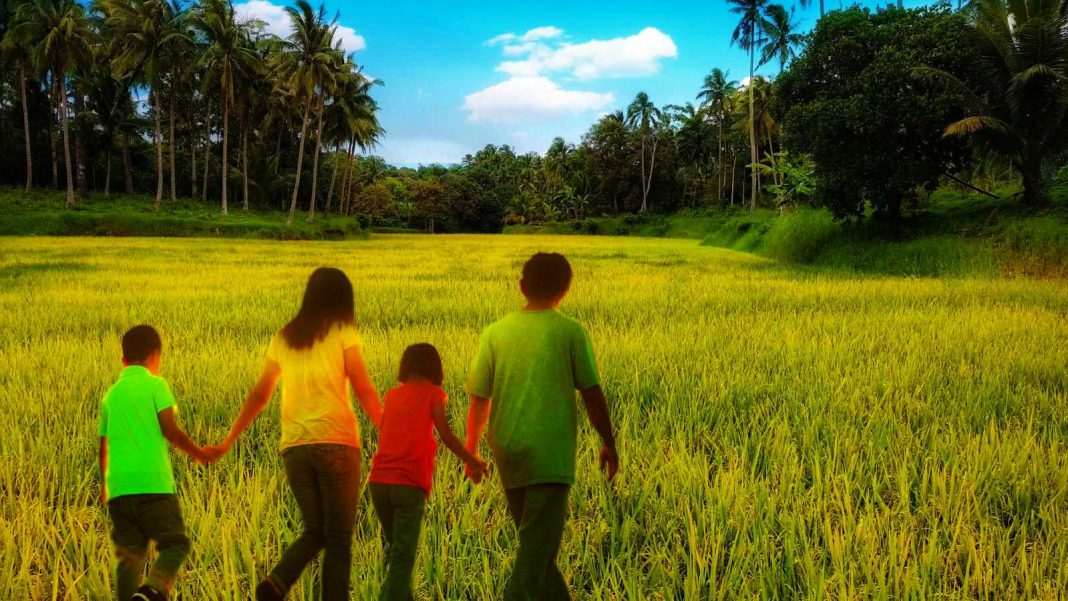 A family walking along the ricefield in Cavinti, Laguna
Photo file/THEPHILBZINEWS

Rice industry leaders, economic managers, and farmers’ representatives affirmed last week the benefits of the year-old Rice Tariffication Law (RTL) in a webinar that emphasized how it has led to cheaper staple food for consumers and higher yields for palay growers.

The resource persons discussed the effects of RTL or Republic Act (RA) No. 11203 on its first year of implementation during a recent webinar entitled, ‘Sa Rice Tariffication Law, Sambayanang Pilipino, Tuloy ang Panalo.’

In attendance at the Zoom webinar were 553 participants from the farmer and consumer groups, civil society organizations, and government agencies. The webinar also reached over 48,000 viewers through Facebook.

The officials discussed the impact of RTL and the efforts of their respective agencies to help stakeholders reap the benefits of the law.

Dar provided updates on the Rice Competitiveness Enhancement Fund (RCEF) and the support provided to rice farmers in their transition toward competitiveness.

Under the RTL, proceeds from import tariff collections by the Bureau of Customs (BOC) go to the RCEF, which is an annual outlay of at least P10 billion intended to provide high-quality inbred seeds, farm inputs and machines, as well as easy credit and mechanization training to palay growers.

“We have been working double-time since October 2019 to carry out the component programs on seed, mechanization, credit, and extension services that complement existing DA interventions,” Dar said.

Dar said that just one year into RTL’s implementation, these mechanisms have already yielded early gains for farmers in terms of higher yields per hectare.

According to a recent PhilRice survey, the increase in farmers’ per-hectare yield has also translated into additional income amounting to roughly 7,500 pesos per hectare. This is especially helpful for farmers and their families as they cope with financial shocks arising from the pandemic.

Dar assured the public, “With the RTL and the RCEF firmly in place and properly implemented, we at DA are confident that the Philippine rice sector will finally regain its strength and fully develop as a resilient and globally competitive industry.”

Chua presented the reform’s role in developing a productive and competitive rice sector. He also discussed the positive benefits of the law for consumers, especially low-income households in the country. |

“Low rice prices help us achieve our poverty reduction goals. This is because rice consumption accounts for around 30 percent of the total food expenditure of the poor,” Chua said.

Chua noted that without the RTL in place during the COVID-19 crisis, socioeconomic outcomes for the vulnerable “would have been much worse.”

He added, “With the ECQ (enhanced community quarantine) shutting down 75 percent of the economy and affecting jobs and income in a massive way, lower rice prices have helped low-income families cope with the crisis, tempering the rise in hunger and malnutrition.”

Castelo outlined in her presentation the efforts of the DTI, in close coordination with the DA, to increase the accessibility and availability of rice in the market.

“Amid the increasing prices of other items in the Consumer Price Index (CPI) basket, prices of rice continued to ease due to oversupply of rice in the market,” she said, attributing the low prices of the staple to the RTL and the DTI’s Presyong Risonable Dapat! (PRD) program.

The PRD program allows retailers and importers with direct access to retail outlets to import rice and sell directly to retail stores, eliminating traders in between.

During the DOF’s presentation on public investment in agriculture, Lambino shared that the RTL has generated more than enough in tariff revenues to support the rice sector through the RCEF.

Lambino added that the BOC has already breached the 10 billion-peso mark in the first half of the year, ensuring that the RCEF is fully-funded with additional revenues for other productivity-enhancement programs.

Industry experts and stakeholder groups were also invited to react to the four agencies’ presentations.

Bangko Sentral ng Pilipinas (BSP) Monetary Board Member (MBM) Bruce Tolentino shared his insights on the role of rice in maintaining low inflation through the pandemic.

It was noted that since March 2019, there have been major improvements in rice inflation since the passage of the RTL.

“Rice inflation is no longer a major concern for our macroeconomic management,” Tolentino said as he presented the rice price trends from 2016 to 2020.

Representing the academe, National Scientist and former University of the Philippines (UP) President Dr. Emil Javier discussed the benefits of rice market liberalization under the RTL.

Javier said that beyond the support given to farmers through the RCEF, many more farmers now benefit from increased access to affordable credit and loan guarantees.

Filomeno Sta. Ana III, the coordinator of the independent research and advocacy group Action for Economic Reforms (AER), said the RTL is a “transformative but disruptive reform,” as he cited the immediately tangible gains of the reform in lowering rice prices while acknowledging the need to support farmers’ productivity and well-being.

“The RTL provides the platform and infrastructure to increase the productivity and incomes of farmers even as the competition arising from freer importation will benefit consumers. Competition can be enhanced, resulting in more affordable prices for consumers,” Sta. Ana said in noting the government’s broad fiscal space to finance the modernization of the rice industry.

Representing the Bulacan Consumer Affairs Council (BCAC), Jose Sosa pointed to the impact of the RTL on food security and rice prices and introduced suggestions to incentivize productivity among small farmers.

Further, Sosa suggested that farmers should organize themselves into cooperatives to allow them to avail of government benefits and crop insurance.

Representing the farming sector, Bravo Primary Multipurpose Cooperative Chairman Robert Almuete thanked the DA for the RTL-related benefits, such as fertilizer and seeds, received by the cooperative through the RCEF.

Almuete’s home city of Muñoz in Nueva Ecija has also benefited from the DA’s provision for a rice warehouse facility, which will help farmers store hundreds of bags of palay.

The segment concluded with insights from Gregorio Saljay III, a farmer representative from Pigcawayan, North Cotabato.

About 200 farmers in Pigcawayan were able to benefit from training implemented by the DA in partnership with the Agricultural Training Institute (ATI), Technical Education and Skills Development Authority (TESDA), and Philippine Rice Research Institute (PhilRice).

Enacted on Feb. 14, 2019, the RTL opened the Philippine rice market and lowered the retail price of the country’s staple for the benefit of more than 100 million Filipinos, particularly the poor who spend about 20 percent of their total household budget on rice.

The RTL removed quantitative restrictions (QRs) on rice imports in favor of a minimum customs tariff of 35 percent as a form of trade protection for our farmers.

Rice tariff revenues are utilized to sharpen our farmers’ global competitiveness, boost their productivity, and raise their income through the RCEF.

The RCEF is on top of the annual funds for the regular programs of the DA and other government agencies dealing with the rice industry.