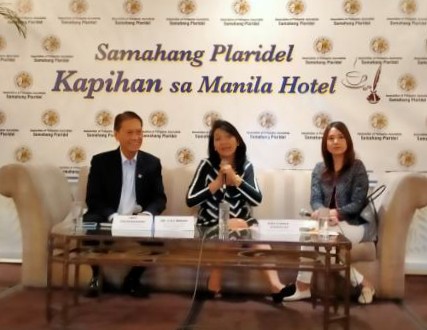 In the midst of misinformation that results in another issue similar to the dengvaxia scare of a few years back, advocates warned to stop this and by insisting on the transparency in vaccine procurement, and avoiding a monopoly for PCVs.

In an experts forum dubbed, “The Need for Transparency and Truthfulness in Public Health Amid Misinformation and Fake News,” Medicines Transparency Alliance (MeTA) chairman and former Bulacan governor Obet Pagdanganan called for good governance and transparency, particularly in the procurement of pneumococcal conjugate vaccines (PCVs) to avoid another problem similar to what happened a few years ago with the dengvaxia issue.

“We should have learned our lesson and not allow another dengvaxia scare to happen with pneumonia vaccines,” Pagdanganan stressed. “Global experts like the WHO have already reported that the available PCVs in the market are comparable in impact so we must make sure that the government procures them through an open, competitive bidding process,” he added.

Last March, the Department of Justice (DOJ) has found probable cause to indict former Health secretary Janette Garin and several others for reckless imprudence resulting in homicide in connection with the deaths of eight children allegedly due to the Dengvaxia vaccine.

“Back in 2017, when the vaccine scare was at its peak, misinformation had caused confidence in vaccines to plummet from a 2015 high of 93%, to an abysmal 32% in 2018,” Dr. Lulu Bravo, Executive Director of the Philippine Foundation for Vaccination (PFV), revealed, stressing that the dengvaxia scare was brought about mainly by misinformation.

“We should not let another vaccine scare happen again, especially for pneumonia vaccines because pneumonia is the forgotten killer of children,” Bravo added.

“As many as 39 Filipino children – or the equivalent of an entire classroom – die every day due to pneumonia, making it the leading cause of death for kids under the age of five. The Philippines is included in the top 15 countries in terms of pneumonia deaths, and those 15 countries are responsible for 75% of all deaths from pneumonia,” Dr. Bravo revealed.

Niña Corpus-Rodriguez, parenting advocate and popular media personality stressed the need to avoid another vaccine scare due to misinformation. “There is so much misinformation in the media right now, and we must all be careful in sorting out the truth from fake news,” Rodriguez stated.

When asked about news reports circulating that the pneumococcal vaccine PCV10 was being touted as a weaker vaccine than PCV13, as reported by Sen. Mike Defensor as well as Representative and former health secretary Janette Garin, Dr. Bravo answered, “Ano ang basehan nila? Our basis should be the World Health Organization who, in a more recent study, stated that PCV13 and PCV10 are comparable in performance and impact, especially if you are considering nations where there are so many deaths from pneumonia, like the Philippines.”

The World Health Organization (WHO) put out a position paper in 2017 which states that there is at present insufficient evidence of a difference in the net impact of the PCV10 AND PCV13 on overall disease burden. In other words, both PCVs available in the market have comparable effectiveness in protecting children from overall pneumococcal disease. The WHO reiterated this stand in 2019.

The International Vaccine Access Center (IVAC) and the Pan American Health Organization (PAHO) also reported on the comparability of PCV10 and PCV13 in their own studies.

“Therefore, saying that one vaccine is weaker than the other is misleading and contributes only to misinformation,” Dr. Bravo noted. “We need to rely on what independent global experts say because it is our responsibility, as pediatricians, to be updated with the most relevant, and most updated information.”

In turn, Pagdanganan also noted that an open and competitive bidding in vaccines can help the Philippine government to vaccinate more people and use the savings for pneumonia treatments. “Dapat may transparency, dahil kung walang transparency ay macoconrner ng isang supplier lang,” Pagdanganan noted. “Pag may competition, you bring down the cost of medicine, and you make it available. Lower the cost, mas marami kang mabibii at marami kang macocover.”

“With the huge budget of P4.9 billion set aside for vaccines, of which 70% has been committed to PCVs, it is critical to prevent misinformation from compromising the sanctity of the contract and the purpose to which it serves,” Pagdanganan claimed.

Pagdanganan also stressed that a truly open and competitive bid would allow proper examination of the two vaccines and promote better transparency. “The important consideration now is how we can provide the greatest protection to the most Filipinos,” Pagdanganan stated. “The government can save close to a billion pesos annually with PCV10, savings that can be used to save even more Filipino lives.

“Considering the comparable efficacy of the two vaccines based on the studies of global experts, as well as the cost implications, the decision to choose which vaccine is best for the nation should be made carefully,” Pagdanganan added.

Acer Philippines dominates the PC market for 10 years, maintains No. 1 spot in the country

First Session of Film Dev’t Lab kicks off in Davao