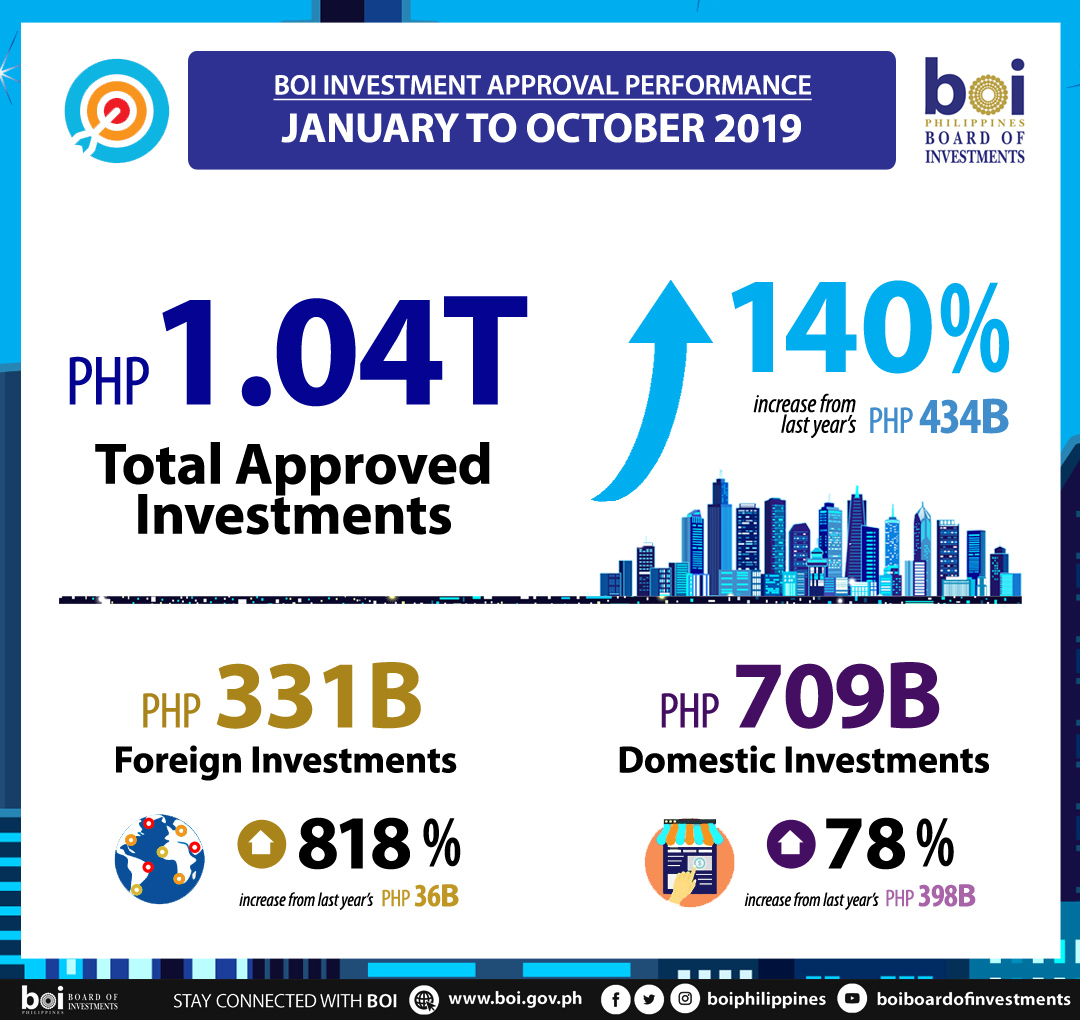 Infographic courtesy of Board of Investment Philippines

Text and photo by Monsi A. Serrano

From the annual target of Php1 trillion, the Philippine Board of Investments (BOI) takes pride of surpassing its target as it reached Php1.040 trillion in investment approvals in the first 10 months of the year, the highest ever in the agency’s 52-year history.

“For the third successive year, the BOI has surpassed expectations in setting a new benchmark for investments. Setting records is getting to be the norm under the Duterte administration. This validates the country’s position as among the top investment destinations globally,” Trade Secretary and BOI Chairman Ramon Lopez said.

The Trade Chief pointed out that “the country’s investment climate continues to improve further with the recent 2020 World Bank (WB) Report in the Ease of Doing Business (EODB) as the country improves its score from 57.7 to 62.8 and a leap of 29 places from 124th to 95th position among the 190 economies. Our double-digit improvement is even more remarkable as our country was cited as among the 42 countries which implemented regulatory reforms in more than three areas resulting in significant improvement in the score. Among ASEAN, we posted the highest improvement.  This is our highest record yearly improvement in a decade.”

“As we pursue the ease of doing business in the country, the Duterte administration is adopting a whole of government approach along with public-private sector partnership. This is a surefire formula for success. This is how Team Philippines works. The executive, legislative, and judiciary, branches of our government, with the active participation of the private sector, are committed to a deliberate, methodical execution of a sound and clear strategy in pushing competitiveness to the next level.  As we move up the competitive ladder, unprecedented number of investments will follow,” he added.

The January-October 2019 figure is up nearly three-fold with a 139.6 percent leap from last year’s Php434 billion in the same period. Local investments hit Php709.1 billion, up a solid 78.2 percent while foreign investments accounted for Php330.9 billion, a nine-fold upgrade (818.2 percent) from just Php36 billion in 2018.

“This historic-setting figure of Php1 trillion is all the more remarkable considering we still have two more months left in the year. And yes, there are still pending projects to be thoroughly reviewed before we give the approval,” Trade Undersecretary and BOI Managing Head Ceferino Rodolfo said.

“Investments from the information and communications (IT) sector is turning out to be the juggernaut as it posted committed investments of Php518.8 billion to date, nearly half of the total figure. We are playing catch-up with our Asian neighbors in upscaling our digital infrastructure as we build more cellular towers and improve our internet speed across the archipelago. As you know, internet traffic is going to grow exponentially since we are already the world’s top social media user according to a recent report. This development complements the consistent growth of the domestic manufacturing sector with Php78.8 billion in approvals or a 29.2 percent increase from Php61 billion last year.

“Growth in the power sector remain steady with Php383.2 billion or a 119.3 percent jump from Php. 174.7 billion a year ago. As we develop, demand for power continues to go up. Tourism remains a bright spot as the accommodation and food service sectors remain a bright spot as it recorded Php9.5 billion for a 187.9 percent increase from last year’s Php3.3 billion. Tourism is among the biggest job creators in our country along with manufacturing. Although we may have experience modest growth in foreign tourist arrivals, this is more than made up by the overwhelming surge of domestic tourists which reached over 110 million in 2018 and has already exceeded the 89.2 million target by 2022 as stated in the National Tourism Development Plan (NTDP). So we look forward with the tourism boom. Meanwhile, the agriculture sector is on the rebound with Php2.5 billion in approvals, up 19.04 percent from 2.1 billion a year ago,” Rodolfo elaborated.

Speaking to THEPHILBIZNEWS, the Trade Chief and BOI Chairman Ramon Lopez said, “Hitting the P1 Trillion mark for the BOI approved investments, as of October this year is truly a major milestone as it has reached the trillion peso level for the first time in the over 50 year history of the BOI, and it is not yet even a full year number. This is very encouraging since we are achieving record level investments each year, since 2017 (P617Bn) and 2018 (915Bn).”

“The confidence on the strong and sustained economic growth under the Duterte administration backed by its aggressive infrastructure program and policy reforms continue to serve as the impetus for many investors to come in. Such growth scenario simply opens up more opportunities to build the necessary support infrastructures such as in power, energy, telecom, utilities, manufacturing. Given the benefit of having a young demographic sweet spot that serve both as a growing market with higher purchasing power, as well as source of competitive workforce, we believe we can sustain this growth momentum and expect even brighter days ahead.,” the BOI Chairman concluded.

When it rains it pours for Trillanes as Duterte’s son, in-law file libel suit