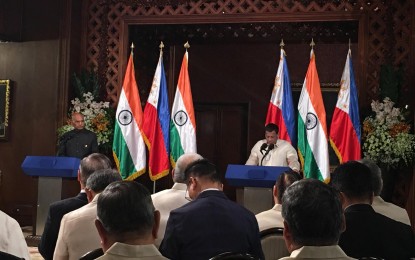 India and the Philippines have identified various sectors for collaboration to boost bilateral trade as Indian President Ram Nath Kovind conveyed his country’s interest to participate in the Philippine growth story during his visit in Manila last weekend.

This was confirmed on today, October 22, by Department of Trade and Industry (DTI) Secretary Ramon Lopez who met with Kovind at the ASEAN-India Business Summit Gala on Saturday, October 19.

“With the Philippines enjoying robust economic growth, we need to create opportunities with India and its own fast-growing economy to expand economic engagements that is based on synergies and complementarities, such as in IT-BPO, pharma, transportation, and infrastructure,” said Lopez in a statement sent to THEPHILBIZNEWS.

He said these sectors were mentioned as he met with Kovind, who underscored the deepening Philippine (PH)-India trade and investment relations following both countries’ common areas of interests.

Seeing this optimism in the Indian president, Lopez pushed for Indian pharmaceutical groups to locate their manufacturing plants in the Philippines to capture a greater market in the country and Southeast Asia.

He also called on the continued exchange of best practices and upgrading primary skills in the IT-BPO and ICT industries. The DTI Chief relayed PH’s optimism on the entry of India’s transport giants in the country as well as the interest of India’s Hinduja in expanding their bus manufacturing operations in PH.

He highlighted the participation of India’s GMR Group in the country’s infrastructure projects through public-private partnerships. The Secretary also emphasized the growing number of Indian students in the country pursuing education in the field of medicine and civil aviation.

According to President Kovind, MSMEs have a great role in economic growth and countries should do their best in promoting the sector. He further applauded programs and initiatives of PH government and private sector, including the works of Sec. Lopez, in championing the MSME and encouraging its growth and development.

The Indian President relayed that PH is a natural partner in ASEAN region and highlighted PH’s massive infrastructure program, Build Build Build, as an area that presents enormous opportunities for companies and investors from both sides. President Kovind relayed the immense value of India’s healthcare and pharmaceutical sectors to PH. He referred that these services ”are bringing joy to the people’s lives” in PH.

“These engagements symbolize the growing friendship between our two nations. We hope that this will continue in the days to come as we work towards creating greater inclusive growth and shared prosperity for all our peoples — the same vision of President Rodrigo Roa Duterte,” said Lopez.

Both Kovind and Lopez recognized the growing opportunities in the digital economy and the need to cope with the digital age. Areas that were emphasized include e-commerce, fintech, imaginative entertainment, and power green solutions.

With the nearing conclusion of the Regional Comprehensive Economic Partnership (RCEP), which both PH and India are participating countries, Lopez eyed for an increase in interaction between the two countries as well as opening of more market access for PH products to India and vice versa.

Lopez says PH not giving up on FTA with South Korea

Balangiga bells arriving in the Philippines on Tuesday