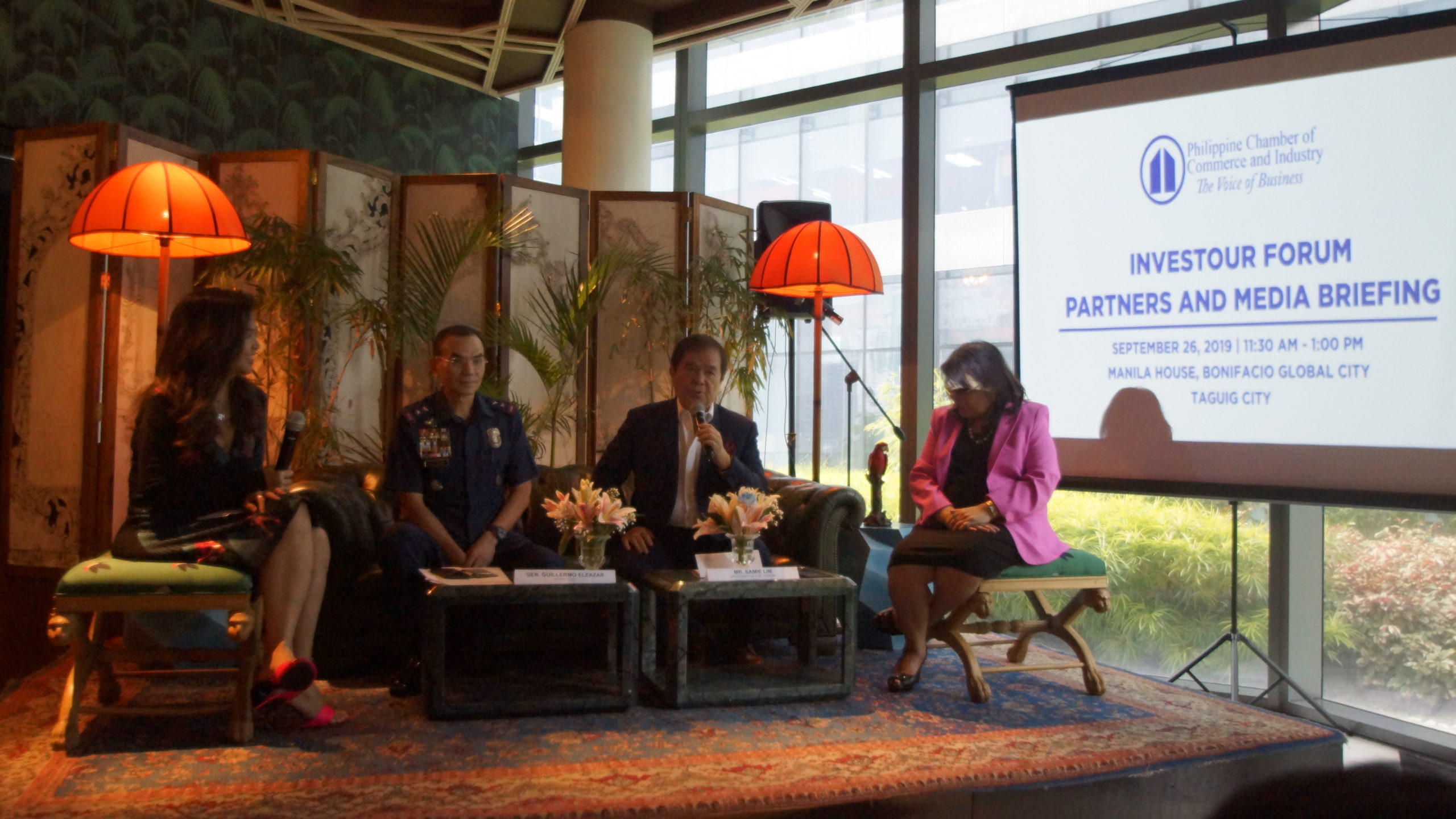 P/Maj. Gen. Guillermo Eleazar affirms the NCRPO’s support for tourism and investments by ensuring peace and order in the capital at the ‘Investour Forum’ sponsored by the Philippine Chamber of Commerce and Industry (PCCI) last September 28 at The Manila House, BGC, Taguig City. (Photo by Monsi A. Serrano/THEPHILBIZNEWS)

Text, photos and video by Monsi A. Serrano

A high-ranking police official reaffirmed recently the Philippine National Police’s (PNP’s) commitment to ensuring peace and order in the country to facilitate a growing tourism industry and keep tourists safe wherever they go.

Addressing the Investour Forum sponsored by the Philippine Chamber of Commerce and Industry (PCCI) last September 28 at The Manila House, BGC, Taguig City, Police Major General Guillermo Eleazar said the PNP is cognizant of the fact that peace and order is a prerequisite to strong tourism and investor confidence in the Philippines.

The director of the National Capital Regional Police Office (NCRPO) pointed out that tourism has been a major contributor to the country with 10.6-percent gross income and ought to be given top priority to keep the economy strong and, at the same time, boost investor confidence.

“To bring in more business here in the country and get more tourists, we need to strengthen the tourism industry. Our top priority is for the police to work with various sectors and tourism industry stakeholders to make this happen,” Eleazar said.

He also pointed out the importance of maintaining peace and order because it is the main reason why travel ban advisories are issued by other countries. “First is the peace and order situation of a country, and second is for health issues like a place has an epidemic problem,” he said, citing the reasons for a travel ban.

In an interview, Eleazar told THEPHILBIZNEWS that the NCRPO’s pitch to increase investor confidence and tourism security will not waver. “We will continue what we have started here in the NCRPO. We take pride that for the past three consecutive years, the crime rate has gone down significantly by 58 percent.”

He added: “We want to make sure that the tourists, both foreign and local, feel safe and secure. That is why we have the TOP COP program which means Tourist Oriented Police for Community Order and Protection.”

The Department of Tourism (DOT) sponsors the training of police officers under the TOP COP program so that they can better respond to tourist concerns and incidents.

“Our TOP COP will be very visible in the areas we have identified as tourists hot spots, and more than being visible we assure them that they are there to help and serve them. We are calling all the stakeholders of the tourism industry to invite tourists in our country, and that we at the NCRPO are committed to ensure their security and safety and of the community,” Eleazar said.

With the Christmas season setting in soon, the police general expressed confidence of a merry atmosphere free of fear and insecurity. “Before, the notion of Filipinos is that the BER season crime rates are high. Contrary to that perception, the past three years revealed otherwise, because there was a 58-percent decline in the volume of crimes. We take pride of that decline in criminality.”

He attributed the sustained peace and order situation to eight factors: the government’s war on drugs; the increase in the police force that has boosted police presence; the role of media in sending a clear message that the police force is doing its job; the serious internal cleansing instituted in the NCRPO; new communications technology and the advent of social media; the increase in the salaries of the police; the President’s order to implement local ordinances against certain night-time activities; and the NCRPO’s Intensified Cleanliness Policy or ICP.

“We work him (President Duterte) as a team. Every member of the PNP is conscious of our mandate to serve and protect, and this is what we will continue to do by working with various stakeholders in the community and also in the tourism industry. By doing so, we can confidently say that tourists will flock like seagulls, more investments will be poured in our country and business will thrive for the benefit of the Filipino people,” Eleazar said.

Investors not all that jolly over Jollibee’s acquisition of Coffee Bean and Tea Leaf?

Learning from a crisis the ‘Mekeni Way’

DOH eyes cheaper medicines from India to boost UHC in 2020