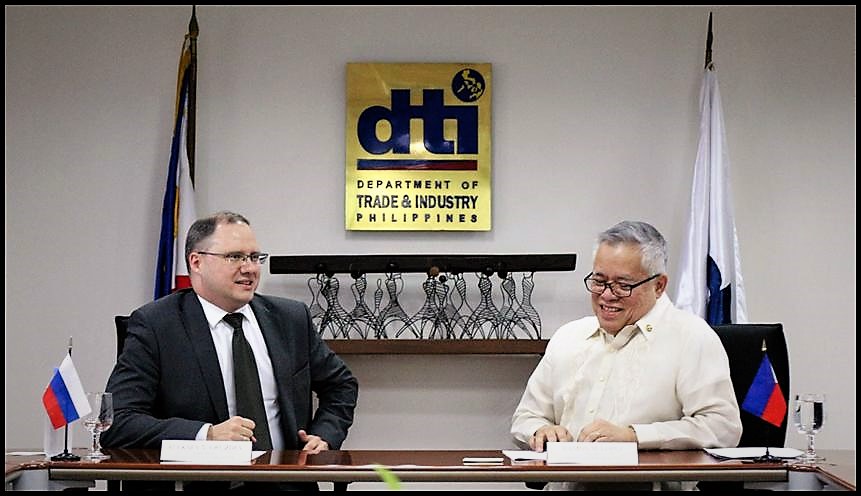 An opportunity for the Philippines to reel in Russian investments is opening up during President Duterte’s visit to Russia on October 1-5, Department of Trade and Industry (DTI) Secretary Ramon Lopez revealed today.

“Russian businesses are keen on expanding their operations to the Philippines,” Lopez said in a statement sent to THEPHILBIZNEWS, citing his recent meeting with Russian Deputy Minister of Industry and Trade Aleksey Gruzdev.

Gruzdev and his delegation of Russian business executives met with DTI officials last September 25, ahead of Duterte’s second visit to Russia which will take the President to the cities of Moscow and Sochi. It will be recalled that Duterte’s first visit to Russia in May 2017 was cut short by the conflict that broke out in Marawi City.

In a pre-departure briefing last weekend, Assistant Secretary for European Affairs Amelita Aquino said Duterte and President Vladimir Putin, who will meet for a fourth time, will witness the exchange of several bilateral agreements that cover cooperation on culture, health, and basic research.

But Lopez expects more than just that, telling THEPHILBIZNEWS that the meeting with Russia’s trade and industry official was marked by Russia’s expression of openness for trade cooperation.

Lopez said he shared the Philippines’ priority industries that Russia can participate in, highlighting pharmaceutical, medical, as well as vehicle manufacturing as sectors for collaboration.

“The Philippines, under the leadership of President Rodrigo Duterte welcomes the interest of Russia to pursue economic cooperation engagements with the government and our business sector. We are optimistic that this good bilateral relationship between the two countries would drive investments, trade, and jobs,” the DTI Secretary said.

In President Duterte’s visit to Moscow this week, the DTI will bring over 150 business sector representatives to link with possible Russian counterparts.

Various business agreements will also be signed during the visit. These include sale of PH canned fish and coconut products, as well as distributorship of lifestyle products and healthcare systems.