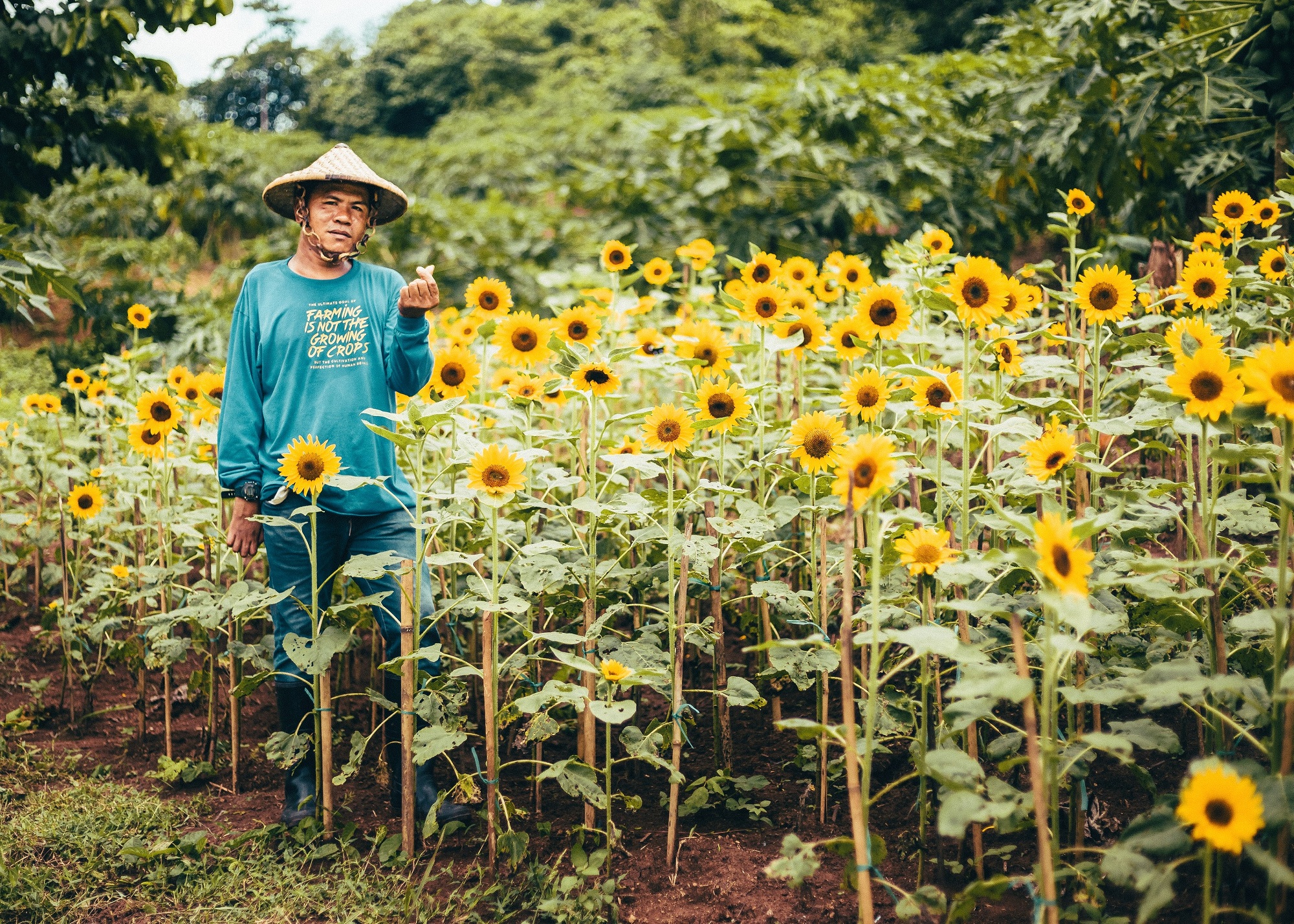 ‘SUNFLOWER MAN’ – Sonny Tesado, 38, a contented and reliable farmer at the Yamang Bukid Farm in Barangay Bacungan, Puerto Princesa City in Palawan, is a diligent worker who, despite his disability, continues to extend his services to take care of the farm’s thousands of sunflower plants in order to support the needs of his family. (Photo by Julio P. Yap, Jr./THEPHILBIZNEWS)

Farmers usually work hard in the field with theirboth hands – either with a crop or seeds to sow in one hand, and a tool on the other.

But for a farmer in a village in Palawan, he works just with his left hand, while his right hand is hidden in one of his pockets.

His way of farming is not an exhibition of sorts, but the only way which can allow him to continue working in order to support his family.

Why? Because several years back, he and a companion figured in a freak accident along a highway after the motorcycle they were riding crashed. This permanently incapacitated his right hand due to serious injuries.

Sonny Tesado narrated that despite his disability which caused him pain and misery, he has to continue with his slash-and-burn (kaingin) exploits in the mountainous areas of Palawan at that time, a process which is the illegal cutting down and burning of trees in order to commercially produce charcoal.

“At first, it was not that easy for me. But I have to continue working even with just one hand. I have to earn money to support my wife and three children –two of them are still studying,” Tesado said in vernacular.

“Being an illegal logger is not an easy task. One has to be quick to hide and always be observant of his surroundings because getting arrested is imitable,” he added.

While he managed to elude arrest during his exploits, Tesado said several of his friends were already caught and some of them are still languishing in jail.

Apparently in the brink of being demoralized due to his situation, word spread around the community that a farm is being developed in Barangay Bacungan sometime in 2017.

However, Tesado was hopeless to be hired as a farmer or even as a helper due to his disability. Little did he know that luck was on his way when the farm’s manager, Barangay Kagawad (village councillor) Daniel Anjan, approached Tesado and offered him a job at the farm.

“At first, I could not believe that I was being offered a job and eventually hired. I was really delighted but at the same time apprehensive due to my disability,” Tesado said. Also during that time, luck was really on his side because his wife Retchel got a job as a helper at the farm’s kitchen and mess hall.

Now, the 38-year-old Tesado can be seen taking care of the thousands of sunflower plantsat the Yamang Bukid Farm in Barangay Bacungan, Puerto Princesa City in the province of Palawan.

Together with the other farmers now employed at the farm, Tesado usually reinforces the sunflower plants with thin bamboo slats with just one hand to protect the sunflowers from being bent by winds or by torrential rains.

While the sunflowers are in full bloom, Tesado and several other farmers take turns in taking care of the flowers at the hilly portion of Yamang Bukid.

Even during the night, several farmers were placed on duty to water and take good care of the sunflowers against the rising temperatures of the recent summer months, which became worse due to the El Niño phenomenon which affected many parts of the country.

Because of his diligence in taking care of the sunflowers, Tesado can now be regularly seen doing his rounds at the Sunflower Garden of Yamang Bukid, which has gained the reputation as an emerging agri-tourism destination in Puerto Princesa City.

In some instances, Tesado also extends his “helping hand” to his fellow farmers to take care of the other plants and vegetables being cultivated at the Yamang Bukid.

Despite being physically challenged, Tesado has been observed to be a reliable and a hardworking farmer.

“Since Tesado’s home is just within the community, we can rely on him to help us in maintaining the farm – even beyond his working hours,” proudly says Yamang Bukid Farm’s production manager Hazer Rabaya.

“In fact, Tesado was among those who readily assisted us to take care and water the wilting plants at night during the onslaught of the El Niño months,” Rabaya added.

It can be noted that during the months of February to May, most parts of the province of Palawan are affected by drought which prompted the local farmers to search for water sources to irrigate their farmlands.

Since Yamang Bukid was not spared from the effect of drought or dry spell, Tesado together with the other workers have to conduct the watering at night to avoid the blistering heat of the sun.

Meanwhile, the management of Yamang Bukid Farm vowed to continue its sincere efforts to value the importance and potentials of the local farmers, including Persons With Disability (PWDs) who really need a helping hand to become productive members of society.

After all, the Yamang Bukid Farm has qualified and technical personnel who can provide the necessary training and guidance to its employees, particularly to those with special needs like Tesado, who says that getting a job at the farm is an uplifting experience.

“I am thankful for the opportunity (given to me by Yamang Bukid Farm) to earn decently for my family, and not afraid anymore of being caught due to the illegal activity that I was formerly doing,” Tesado shared.

Tesado also narrated that he is now contented and enjoys taking care of the sunflower garden, planting rows upon rows of it with his “one hand,” and watching the tourists and visitors having their “selfies” in the middle of the sea of the blooming sunflowers.