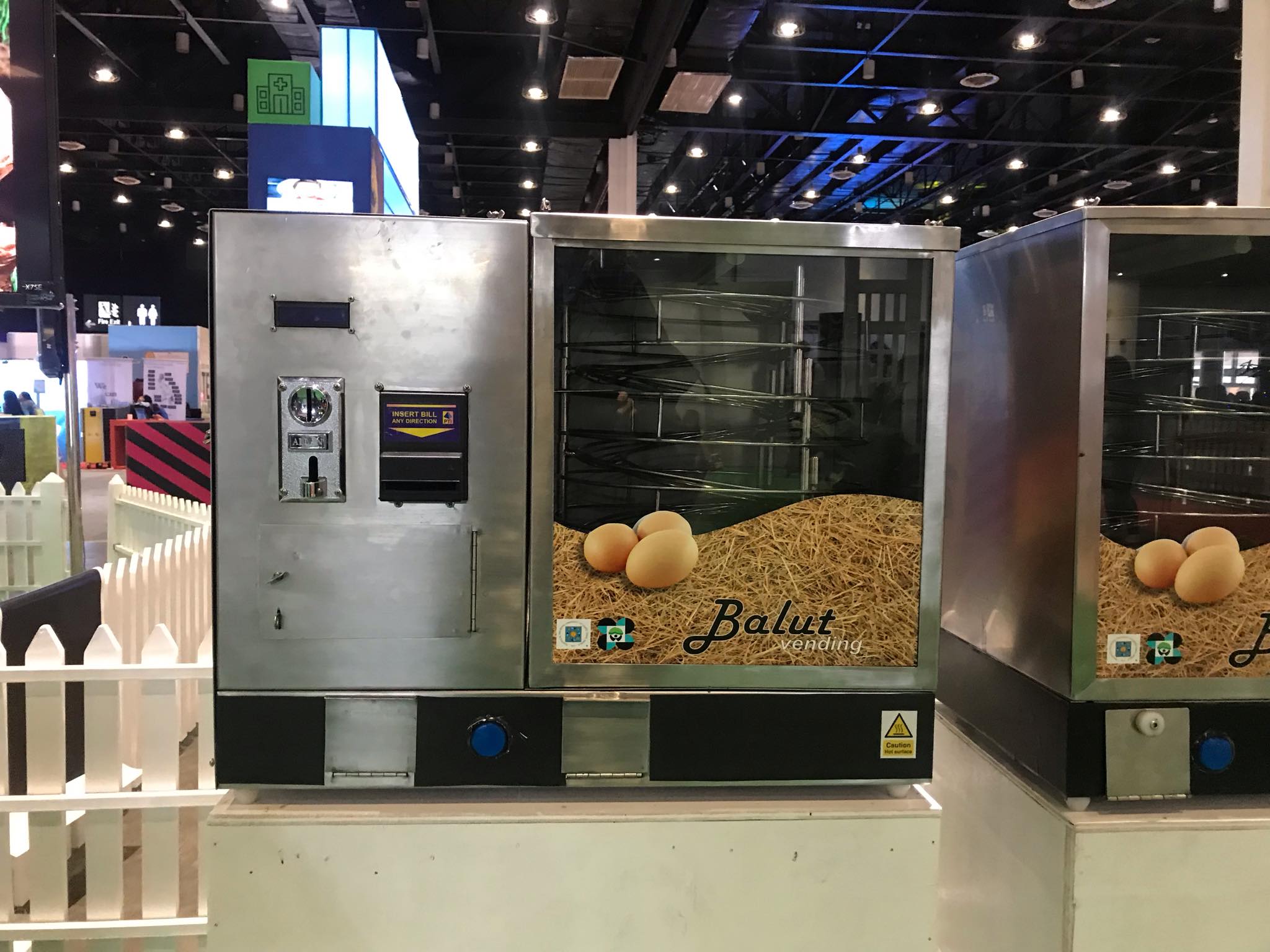 A balut vending machine introduced by the Department of Science and Technology ensures the right temperature to keep the fertilized duck egg fresh and delicious. (Photo by Dr. Rebekka Volmer/THEPHILBIZNEWS)

Gibberish blackish tiny duck head becomes visible after sipping down the “sabaw.” Red and greyish veins covering the egg yolk, giving the egg a dirty disgusting appearance. “You can peel it completely and eat it from the plate – but if you eat Balut with Style, you eat it at once,” Armand says, and the dug embryo goes down his throat – yucky!

Balut is fertilized duck egg, sold as street food usually in the evening. It is rich in protein and calcium. Thus, it is associated with masculinity and makes it popular among men: after a day full of hard work, a beer with Balut can give you back your power. Some even call Balut the Philippine Viagra.

The history of eating Balut is not yet fully revealed. Some people say it might be introduced by the Chinese. However, it could have been the other way around: the Chinese imported the tradition from the Philippines! Since in the Philippines, the eggs are more popular. It is more likely to have been developed here:

“Disgusting Food” is something that reunites a culture. Every cultural tradition includes food that is considered as “disgusting” by other nationalities: smelly, decayed milk with insect larvae became the Casu marzu cheese in Greek, sheep intestines stuffed in a goat stomach became haggis in Scotland – and the fertilized eggs are popular in the Philippines.

One theory why cultures develop traditions to eat food considered by other cultures as disgusting (before trying), is that food not only reunites a culture – it also distinguishes cultures.

Disgust is one of our basic emotions. It protects us from diseases and toxic food. And it is a highly social emotion.  “Eeeeh – yucky” with an over wrinkled nosed, signals everyone in the group: this food is disgusting. And children can easily learn from their parents, siblings and peers what is considered as disgusting and what is not.

If you grow up in a culture where it is normal to eat food that is considered by others as disgusting, you will not develop avoidance against it. Thus, it is easy to “spot an insider of a group,” similar as it is done via clothing, tattoos or decoration. However, in the case of food, you cannot “fake it.” It is easy for a foreigner to wear a barong to signal to others you are part of the Philippine cultures – but overcoming your emotion of disgust is a true sign of commitment to culture.

Starring in the gibberish, underdeveloped eye of a duck head, I also got horrified: Ideas of feathers hanging in between my teeth, tiny bones getting crushed, and swallowing intestines of a duck embryo is killing any appetite – yucky!!!

I followed the instruction of my technical assistant – and hmmm… balut is yummy… masarap!

Traditionally, balut is sold in sand pots to be kept warm. You cannot find it in mass-production yet. However, the perfect melange of tradition and innovation is the balut vending machine! This metal box was developed and introduced by the Department of Science and Technology where balut is kept warm and each balut is rolling cautiously down a channel after inserting coins or bills: et voilà a fresh balut available 24 h!

Dr. Rebekka Volmer is an archaeologist and currently teaching at the University of the Philippines-Diliman. She is a regular contributor in THEPHILBIZNEWS talking about her discoveries and experiences in the Philippines.

NIKKA: A Love story that yielded a “Perfect Blend”