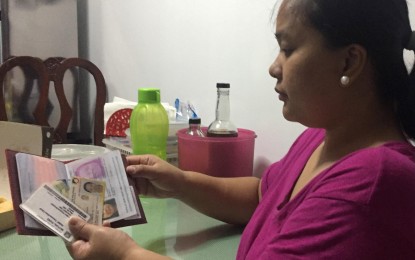 May Pagkatipunan-Aceron, 38, says she keeps four government issued IDs - Pag-ibig ID, Passport, SSS Unified ID at PhilHealth ID -- to ensure that she has enough proof of identity for public and private transactions. On Aug. 6, 2018, President Duterte signed Republic Act 11055 creating PhilSys or the National ID, which serves as a single official identification card for all citizens and foreign residents in the country. (Photo courtesy of May Pagkatipunan-Aceron via PNA)

For many people, nothing can be more frustrating than a transaction that cannot be processed due to lack of valid IDs that could verify their identities.

May Pagkatipunan-Aceron, 38, told Philippine News Agency (PNA) that she has four government-issued IDs which she uses for public and private transactions.

However, having numerous IDs could be disadvantageous at times because these take up much space in one’s purse, Aceron added.

“Bukod sa maraming dapat dalhin at itago, marami ring dapat maipa-renew or mag-request ng another copy kapag may nawala (Apart from having many IDs to bring, you’ll also need to have them renewed or to request for extra copies in case I lose them),” she said.

These are a few of the things, Philippine Identification System (PhilSys), the country’s foundational identification system, aims to address by providing valid proof of identity for all citizens and resident aliens.

The initiative is to simplify public and private transactions in line with the government’s drive to curtail bureaucratic red tape as President Rodrigo Duterte signed it into law in August 2018.

The Philippine Statistics Authority (PSA) has assured the public that it is “on the course of its strategic blueprint for the implementation of the PhilSys.”

“We are on track to have the system fully operational and to start the mass registration by mid-2020, and complete the enrollment of the population by mid-2022,” National Statistician and Civil Registrar Undersecretary Dennis Mapa said on Monday in a statement.

According to the PSA, the PhilID will be used for application for eligibility, services, and access to social welfare and benefits granted by the government; passports, driver’s license; tax-related transactions; admission in schools and government hospitals; opening of bank accounts; registration and voting purposes; transactions for employment purposes; and cardholder’s criminal records and clearances.

But it will not replace existing government identification cards that serve a purpose beyond identity authentication such as the driver’s license for driving, passport for travel, and UMID for social security transactions.

It will also support the government’s initiatives to boost social protection and financial inclusion and accelerating the Philippines’ shift towards an inclusive and trusted digital economy.

“Pabor ako sa national ID but dapat may super strict na means to protect it – protect the identity ng tao, hindi mareplicate sa kahit saan (I’m in favor of national ID but there must be a super strict means to protect it – protect the identity of people, that it won’t be replicated anywhere). There should be a code or chip whatever means to guard it,” Aceron said.

Citing that the PhilID would eliminate doubts about the identity of the cardholder, Aceron said easier and faster transactions can be expected in private and public offices.

Wary of identity theft, Aceron requested for strict implementation of the guidelines on the registration, creation, and use of the PhilID.

“There must be a way that it cannot, must not be easily replicated for the protection of the cardholder. Also, I hope the process of availing this ID will be quick, including the replacement process in case it gets lost,” she said.

Mapa said the PSA and the PhilSys “take their responsibility in protecting the security and integrity of the Filipinos’ personal data seriously.”

“Given that the PhilSys is a highly technical and complex program, we are pushing with multiple pilot testing to continuously improve the system and level up its security features before launching it to the public,” he added.

Mapa cited that the Data Privacy Act of 2012 and the PhilSys Act have strict controls over which circumstances the data in the PhilSys registry can be accessed and shared.

A Privacy Impact Assessment (PIA) will also be conducted this year to identify potential exposures with the privacy of personal information to which data privacy and security frameworks and standards will be anchored.

Part of this will be the Vulnerability Assessment and Penetration Testing (VAPT) to test the integrity of the system.

“The PSA sees the utmost importance for the PhilSys to first undergo a series of pilot testing before finally launching it to the public. We want to ensure that the processes are efficient, the systems are fully functional, and all information within the system is secured,” Mapa added.

Including biometric and demographic capturing processes, the pilot test registration, starting from the National Capital Region, will run from September 2019 until June 2020.

The PSA said the operations will expand to cover select groups from nearby regions, Regions III and IV-A once the system is stable.

The PSA will extend the pilot registration process to test the end-to-end system which essentially involves deduplication, generation of unique PhilSys Numbers (PSN), and card printing and issuance by May 2020. (First published by PNA, Sept. 3, 2019)