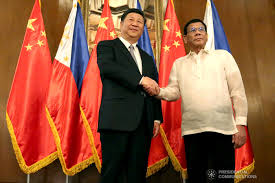 The Philippines continued to push for stronger bilateral business and economic relations with China following the fifth visit of President Duterte last week.

At the sidelines of the presidential visit, the Department of Trade and Industry (DTI) organized a PH-China Business Forum, which was attended by a 272-business delegation from established companies of both countries. These included business executives from steel, manufacturing, construction, mining, energy, electronics, tourism, as well as blockchain technology industries.

“The Department of Trade and Industry is committed to aggressively promote increased business with China. This is an important opportunity for promoting investments and partnerships in line with our Inclusive, Innovative Industrial Strategy (i3s). Furthermore, this will increase capacities of our manufacturing base to serve the growing domestic demand, promote import substitution, and to export more—not only to China—but also to other markets,” said Lopez.

“Greater trade and investment engagements between our two nations will surely help us to create the needed opportunities for our countrymen so that they can attain a better life,” the trade chief added.

Sec. Lopez also expressed optimism in the relationship of the two countries under President Duterte’s administration. He shared that through the President’s leadership, the country’s bilateral relations with China is at high level and is opening many business opportunities between two nations.

At the same event, Steel Asia and HBIS Group also signed a Memorandum of Understanding (MOU) on the establishment of an Integrated Steel Mill (ISM) in Batangas, which will support PH’s bid to be a major producer of high-quality and safe steel products by 2030. The ISM will allow the country to produce basic iron and steel products, including flat products that are not yet being produced in PH.

Memoranda of Agreements (MOAs) were signed between Tranzen Group and their Chinese partners, which indicated progress of their projects related to the national WiFi and emergency services, socialized housing, expressways, as well as power plants.

Meanwhile, President Duterte encouraged the business delegates to participate in the country’s growth story and partner with PH in building the economy. The President likewise committed in bringing good governance and maintaining order to ensure an enabling environment, which would allow businesses and investments to thrive and prosper. The President also reiterated that his administration will ensure all investments are protected.