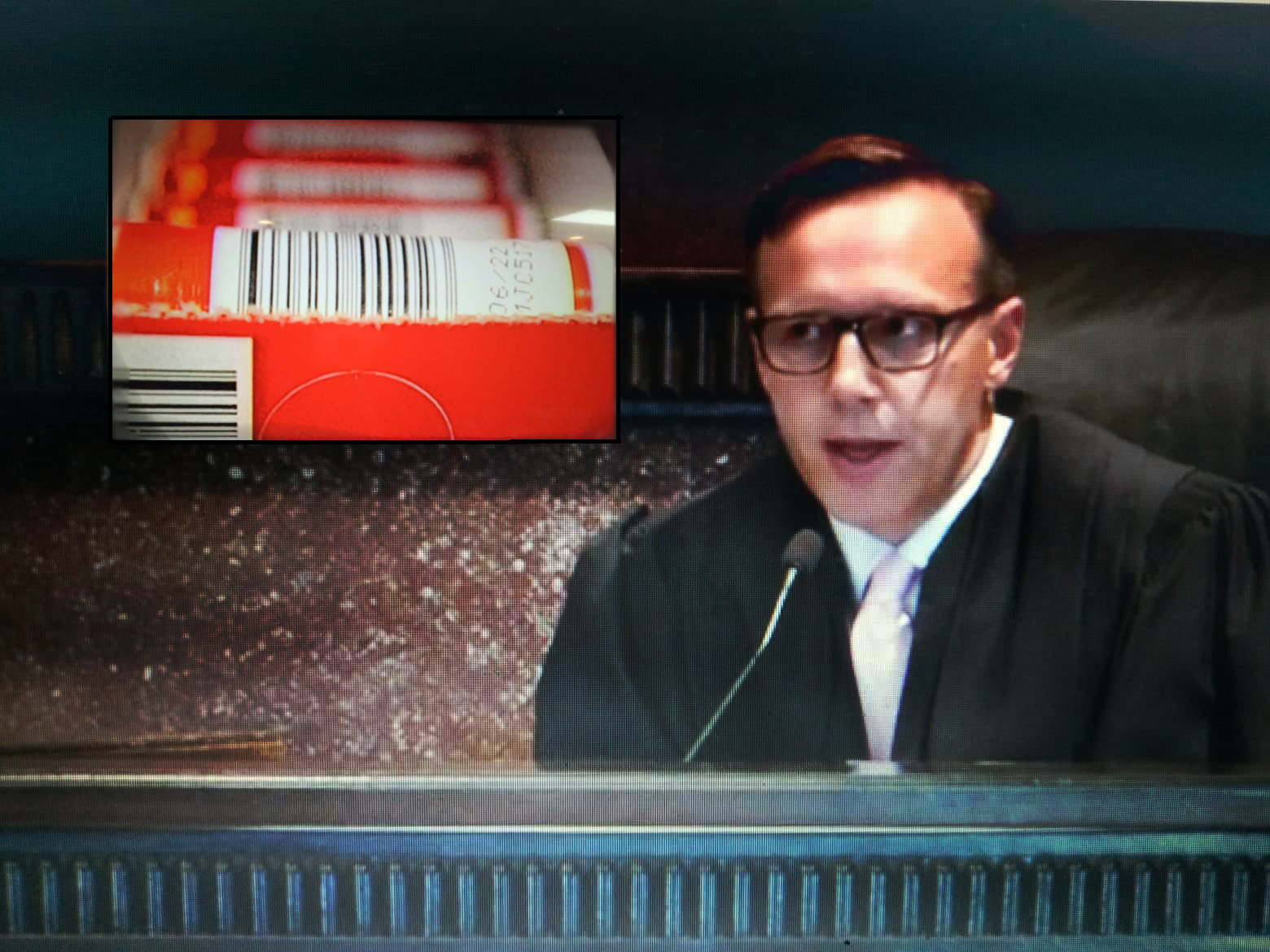 Oklahoma Judge Thad Balkman renders his decision on Johnson & Johnson in the opioid epidemic case, ordering the pharmaceutical giant to pay $572 million to the state over deceptive marketing of its addictive painkillers on Monday, August 26. (Youtube screengrab by THEPHILBIZNEWS)

Johnson & Johnson (J&J), a brand trusted locally for its gentle hygiene and baby care products, is taking a big hit to its reputation after a US court ordered last Monday (Tuesday in Manila) that it should pay the state of Oklahoma $572.1 million for compromising the health of thousands by aggressively marketing addictive painkillers called opioid.

While J&J is set to appeal the ruling of Judge Thad Balkman of the Cleveland County District Court in Norman, Oklahoma, the decision is a breakthrough for class suits filed across the United States against opioid manufacturers over three decades of addiction and deaths blamed on the drug.

Reading his decision that J&J violated Oklahoma’s public nuisance law by its deceptive marketing of its opioid painkillers Duragesic and Nucynta, Judge Balkman ruled that its actions “compromised the health and safety of thousands of Oklahomans.”

Despite Monday’s decision, J&J’s stock rose slightly on Tuesday (today in Manila) because, prior to the court ruling, investors were expecting a bigger fine on the company as the state attorney general had targeted $17 billion in damages.

“As silly as it sounds, a $600 million decision was, relative to expectations, a positive outcome,” said Joshua Jennings, an analyst for Cowen, was quoted by the New York Times in its report on J&J increasing its stock by 1.44 percent to $129.64 a share.

“Other drugmakers that sell opioid painkillers and are defending against similar lawsuits also rose after-hours, including Teva Pharmaceutical Industries Ltd up 2.6 per cent, and Endo International Plc, up 1.4 per cent higher,” the Irish Times reported.

Figures presented to court by state prosecutors showed about 6,000 residents of Oklahoma died from opioid addiction overdoses since 2000.

In the NYT report posted on its online Health section today, it said: “Some question how long the company can weather what has been a series of damaging setbacks to its brand, including a spate of lawsuits over whether its talcum powder led to ovarian cancer, and high-profile cases over other potentially flawed products, like pelvic mesh and the anti-stroke drug Xarelto, which has caused excessive bleeding.”

The report written by Katie Thomas and Tiffany Hsu for NYT also quoted Stephen Hahn-Griffiths, an executive at Reputation Institute, as saying: “Johnson & Johnson is a corporation under duress on a number of fronts.”

The NYT also interviewed David Vinjamuri, a marketing consultant and professor who worked at Johnson & Johnson in the 1990s, who said that the company had built its reputation “through decades of careful messaging and product management” so that doctors and hospital administrators were more inclined to trust its products over other pharmaceutical firms.

“My fear now is that the systematic competitive advantage Johnson & Johnson got from its reputation has eroded. Brand equity is a reservoir that floats you until it’s dry,” Vinjamuri told the NYT.

DOH eyes cheaper medicines from India to boost UHC in 2020