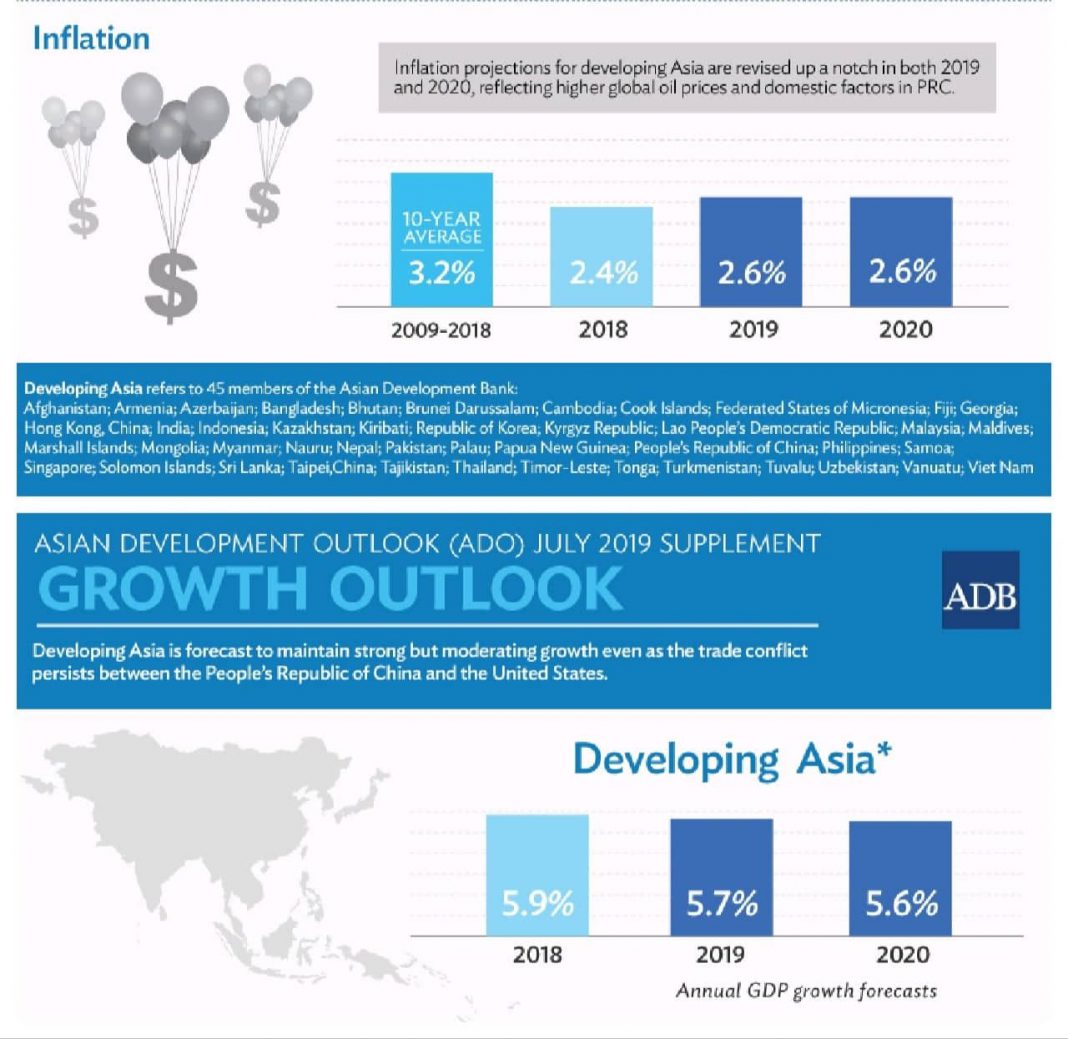 In a supplement to its Asian Development Outlook (ADO), ADB maintains growth forecasts for developing Asia at 5.7 percent in 2019 and 5.6 percent in 2020 — unchanged from its April forecast. These growth rates are slightly down from developing Asia’s 5.9 percent growth in 2018. Excluding the newly industrialized economies of Hong Kong, China; the Republic of Korea; Singapore; and Taipei, China, the regional growth outlook has been revised down from 6.2 percent to 6.1 percent in 2019 and maintained at that rate in 2020.

Deepening trade tension between the People’s Republic of China (PRC) and the United States (US) remains the largest downside risk to this outlook, despite an apparent truce in late June that could allow trade negotiations between the two countries to resume.

“Even as the trade conflict continues, the region is set to maintain strong but moderating growth,” said ADB Chief Economist Mr. Yasuyuki Sawada. “However, until the world’s two largest economies reach agreement, uncertainty will continue to weigh on the regional outlook.”

The growth outlook for East Asia in 2019 has been revised down to 5.6 percent because of slower than expected activity in the Republic of Korea. The subregion’s growth outlook of 5.5 percent for 2020 is unchanged from April. Growth for the subregion’s largest economy, the PRC, is also unchanged, with forecasts of 6.3 percent in 2019 and 6.1 percent in 2020, as policy support offsets softening growth in domestic and external demand.

The major industrial economies have had slight revisions to their growth forecasts, with the US revised up to 2.6 percent for 2019 and the Euro area revised down to 1.3 percent. The growth outlook for Japan is unchanged at 0.8 percent in 2019 and 0.6 percent in 2020.

Developing Asia’s inflation projections were revised up from 2.5 percent to 2.6 percent for both 2019 and 2020, reflecting higher oil prices and various domestic factors, such as the continuing outbreak of African swine fever in several Asian economies, which is expected to drive up pork prices in the PRC.

ADB is committed to achieving a prosperous, inclusive, resilient, and sustainable Asia and the Pacific, while sustaining its efforts to eradicate extreme poverty. In 2018, it made commitments of new loans and grants amounting to $21.6 billion. Established in 1966, it is owned by 68 members — 49 from the region. (ADB)