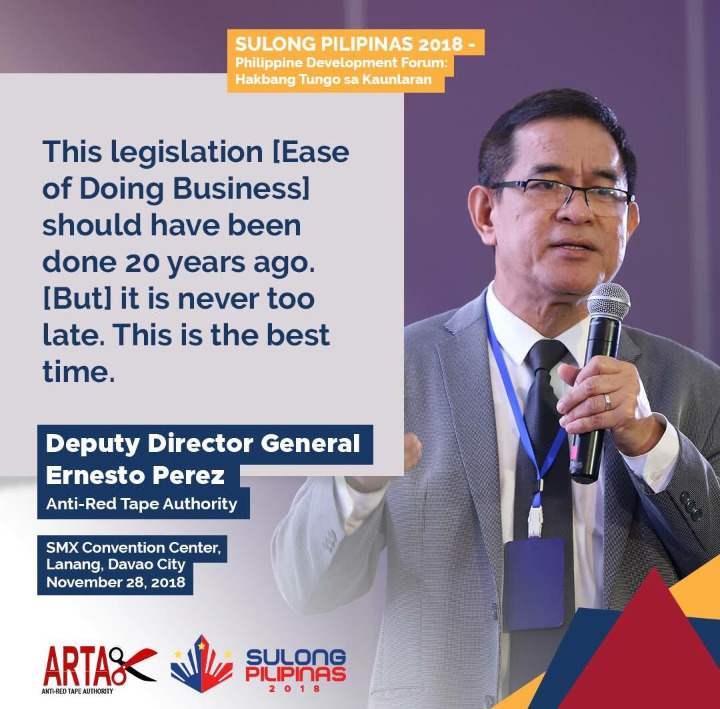 The business sector and even ordinary Filipinos can finally benefit from easier and faster transactions with government with the signing on Wednesday, July 17, of the implementing rules and regulations (IRR) of the ease of doing business law.

“This IRR gives ARTA the teeth to ensure that regulatory reforms will not just be on paper but will translate into concrete action beneficial to the business sector and the ordinary people transacting with the government,” said lawyer Ernesto Perez, Deputy Director General of the Anti-Red Tape Authority (ARTA).

Perez said Republic Act 11032, or the Ease of Doing Business and Efficient Government Services Act, was enacted in two years following the directive of President Rodrigo Duterte to make reforms to ensure competitiveness and ease of doing business mandatory.

“(This) gives time our people to speak out and say enough is enough of corruption and unnecessary delays in government service,” he said during the signing of the law’s IRR.

“If the application is not processed within that standard processing time of three, seven, 20 working days, or if it is not acted without the required extension, then the government official or employee concerned will already be subjected to prosecution. Because the law says failure to act on the application within that standard processing time, is already a clear violation,” he said.

“Gusto po natin gamitin ang (We want to use the) social media and electronic means to receive complaints. So it doesn’t mean to be formalized yet,” he said.

Belgica said ARTA would then evaluate the quality of the complaint.

“As long as the complaint would specify the identity of the complainant, with contact numbers (because) we want to call you back immediately. We want to know what agency and who are you complaining. What are acts or what is the act that you are complaining of, and please, if you may, be ready with whatever evidence that you have. You could send it by picture, by text or whatever. If we would determine that there is really cause for us to evaluate further or to go on with the case, after evaluation, we would ask you to file a formal charge,” he noted.

“Ito yung sa batas na sinasabi na (The law says) we will file a case with the Civil Service (Commission), with the Ombudsman, and other appropriate courts. Pwede kami mag (We can) file report and complaints to the Office of the President and other administrative agencies that specific person belongs to,” he added.

Belgica further said the success of the implementation of the law hinges on the speed and the ease of doing business in the country.

“Pati maliliit na aplikante sa negosyo (even small business applicants), we all treat them as clients. I believe that this is also the intention of our President to make it, from the small to medium to large companies, easy for them to open their business, to do business, and expand their businesses,” he added. (First published by PNA, July 17, 2019)