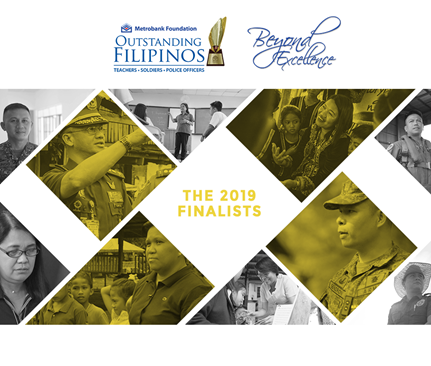 The 18 finalists of the 2019 Metrobank Foundation Outstanding Filipinos have been revealed. They will proceed to the final selection process on July 26 and 27 at the Metrobank Plaza, Makati City.

After months of thorough document review, background check and verification of accomplishments in both professional and community service in the semi-final stage by the Board of Assessors and third party validators, 18 finalists were selected among 240 nominations submitted for this year’s cycle. The finalists will then face the Final Board of Judges, a multi-sectoral jury, in a panel interview as they vie for the award.

Guided by the theme of “Beyond Excellence”, the Metrobank Foundation Outstanding Filipinos are recognized for rendering service above and beyond their call of duty. Their accomplishments must have inspired and influenced their peers as well as the people in their respective communities. Their works must have transformed a community with a lasting positive impact on people and to the country.

Of these 18 finalists, 10 Metrobank Foundation Outstanding Filipinos composed of four teachers, three soldiers and three police officers will be awarded. They will each receive a cash prize of P1 million, a gold medallion and a trophy during Metrobank’s 57th anniversary celebration in September. (Press Release/Metrobank Foundation)