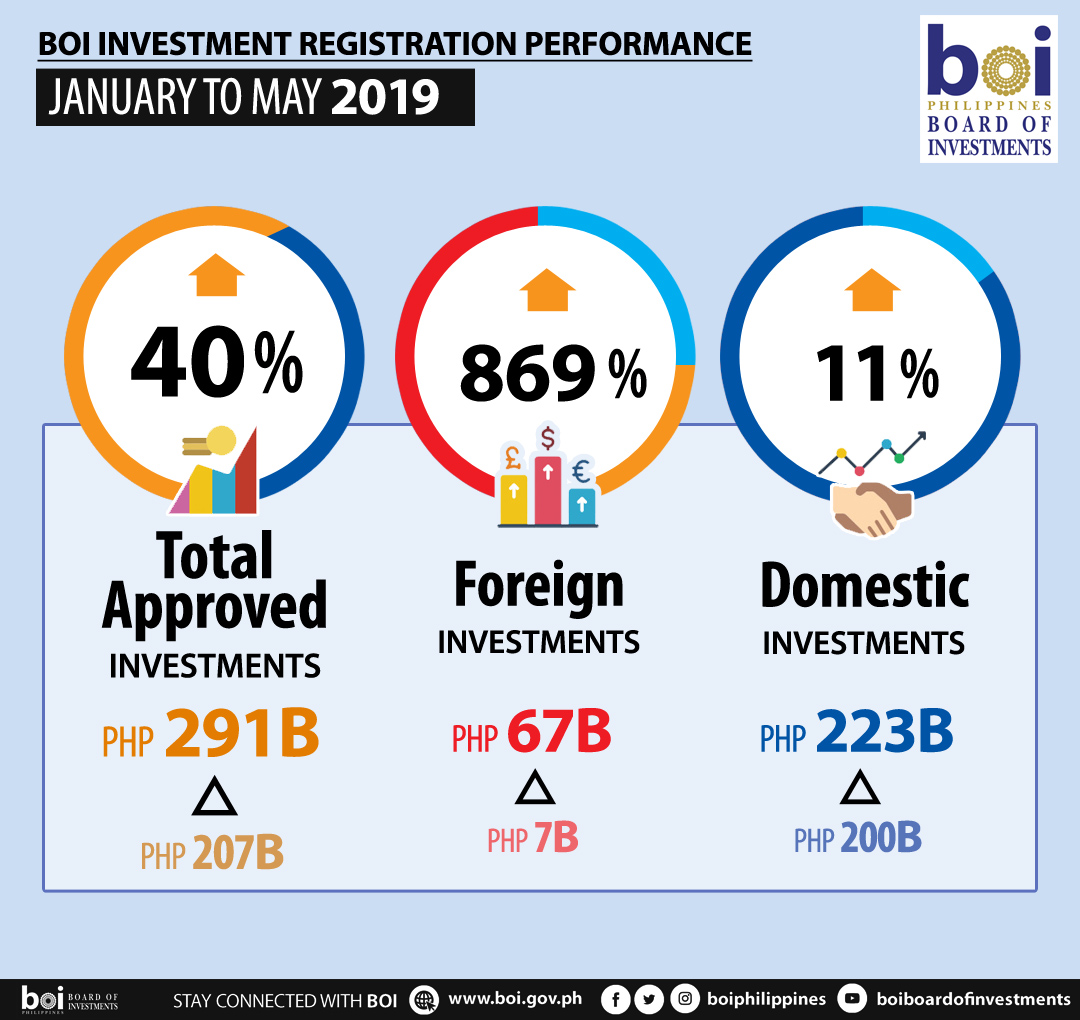 Total approved investments recorded by the Philippine Board of Investments (BOI) from January to May 2019 reached Php290.6 billion, a 40.1 percent increase from Php207.5 billion in the same period last year.

“With the Philippine economy up 4 notches to 46th in the latest World Competitive Yearbook rankings, the vote of confidence of the administration affirmed in the May mid-term elections with the resounding victory of most of its candidates and allies, is seen to sustain investor confidence for the Philippines,” Trade Secretary and BOI Chairman Ramon M. Lopez said.

He added that the recent visit of President Duterte in Japan will provide added boost to the investment climate as he was able to attract nearly Php300 billion in investment deals, business expansion and letter of intents for Japanese firms to channel more capital into the country which are expected to create over 80,000 additional jobs for Filipinos.

“Power projects are essential as it fuels the Build, Build, Build program of the government and the demands of a growing population.  There are big power projects that will complement the infrastructure projects in the coming months even as we exercise due diligence for projects that are deserving of incentives.  At the end of the day, we have to ensure our power supply will accommodate the strong demand not only of our massive infrastructure projects and population but also the rapid expansion of our industries, lead by the manufacturing sector,” Trade Undersecretary and BOI Managing Ceferino Rodolfo said.

He added for the month of May, several manufacturing and service facilities got the nod of the Board. Among these are the Php700 million shipping project of Southwest Gallant Ferries, Inc. which will service the Batangas, Romblon and Roxas City routes, the Php400 million Cavendish banana facility of Tren2 Agri-Industries in Agusan del Sur which will be exported once operational and eight (8) low-cost housing projects worth Php2.billion spread across Calabarzon and Central Luzon regions.

“We will continue to spread economic development in the regions as records show barely 3 percent of investments are located in the NCR with the rest (97 percent) going to the countryside,” Rodolfo said.