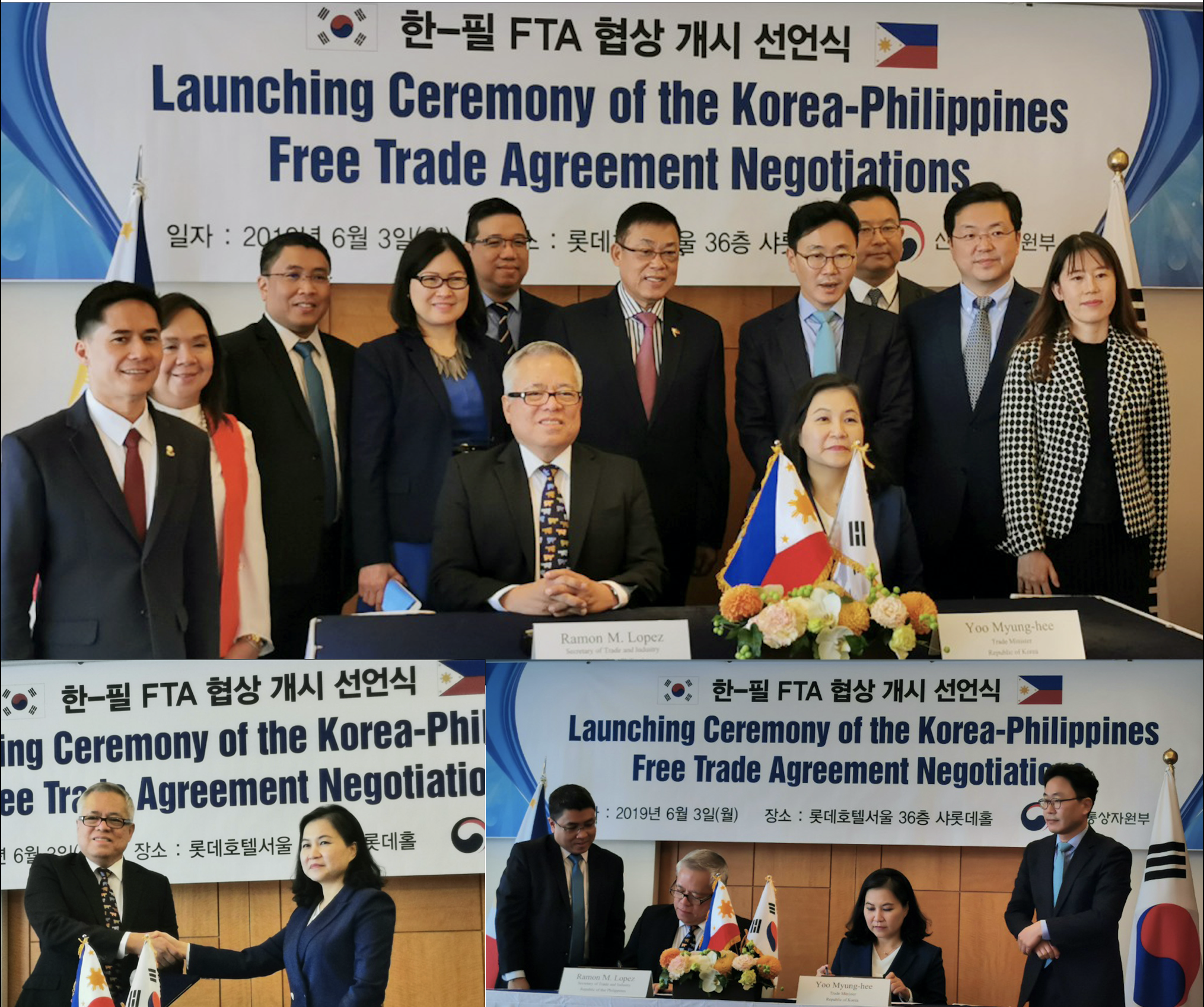 SEOUL – Stronger bilateral relations between the Philippines (PH) and Republic of Korea (ROK) are expected as Department of Trade and Industry (DTI) Secretary Ramon Lopez and Minister for Trade, Industry, and Energy Yoo Myung-hee officially launched the negotiations of the PH-ROK Free Trade Agreement (FTA) on 3 June 2019.

During the launch, both countries recognized the potential to advance economic relations “by enhancing trade and investment flow between them through, removal of impediments to closer trade and creation of business and investment opportunities.”

“Today’s event was borne on the back of a number of meetings between our Leaders and officials that had served to convey our mutual interest for an FTA. For the Philippines, the FTA means we can achieve improved market access for our agriculture products such as banana, pineapple, and mangoes, as well as industrial products and other services. We are working on better reciprocity of tariff rates and market access of our agricultural and industrial products to improve the balance of trade with South Korea,” said Sec. Lopez.

“These include movement of natural persons and more investment opportunities that could lead to job generation. These also include greater collaboration in innovation, as well as R&D that will support the implementation of our inclusive innovation and industrial strategy,” the trade chief added.

Minister Yoo conveyed that the FTA is a significant step forward to a stronger economic partnership between the two countries. The Minister also noted that PH is very a important trade and investment partner for ROK.

Both ministers committed to conclude the negotiation of a “comprehensive and future-oriented FTA” by November 2019. The FTA will create favorable conditions for exporters, investors, industries, work force, as well as the micro, small, and medium enterprises (MSME) of both countries.

At the sidelines of the launch of the FTA negotiations, the first meeting of the PH-ROK Joint Commission on Trade and Economic Cooperation (JCTEC) also took place. PH was represented by DTI Undersecretary and Board of Investments Managing Head Ceferino Rodolfo.

“The JCTEC is equally important as it will tackle a broader perspective of economic cooperation between the two countries,” said Sec. Lopez.

Meanwhile, the DTI chief is set to conduct a roundtable meeting with high-level South Korean business executives from various industries such as construction and infrastructure, tool and die; as well as energy to discuss opportunities in locating and expanding their operations in PH.

Filipino cuisine to be served at Melbourne Food and Wine Festival