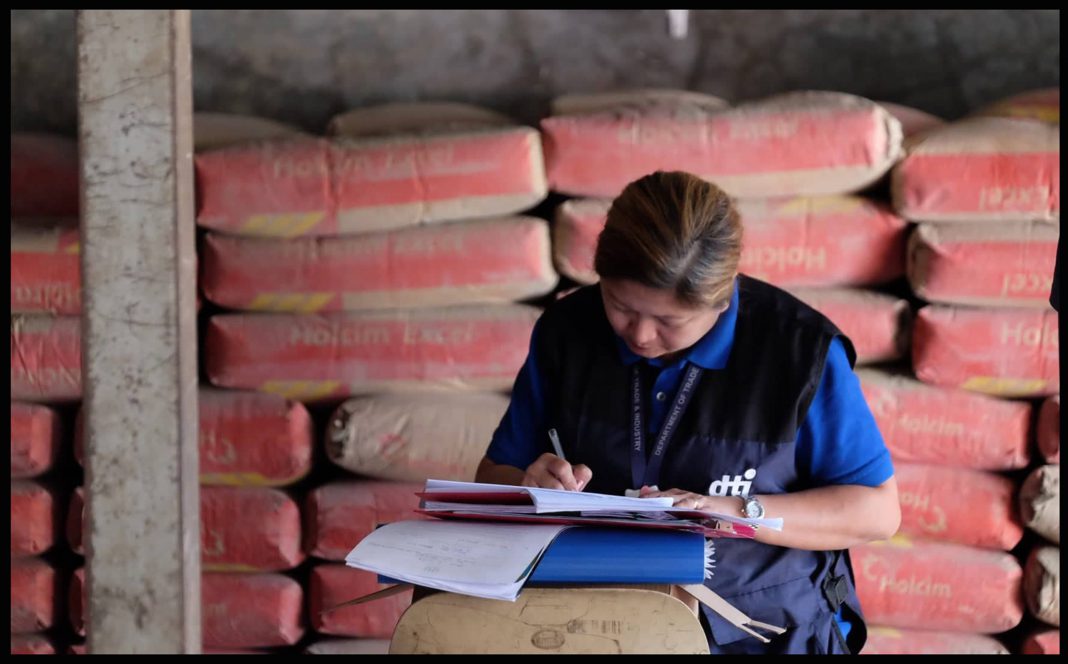 The Philippine government through the Department of Trade and Industry (DTI) steps up its visibility in the market through intensified monitoring and enforcement efforts to ensure product quality and consumer safety especially on construction materials such as cement, steel bars, angle bars, uPVC pipes, and sanitary wares.

According to the enforcement reports, from January to April of this year, the DTI-Fair Trade Enforcement Bureau (FTEB) confiscated and sealed a total 35,112 pieces of steel bars, equal-leg angle bars, uPVC pipes, G.I. wires, and electrical cords valued at over Seven (7) million pesos. The Bureau monitored 1,173 firms and served a total of 138 Notices of Violation (NOVs). Out of these NOVs, 118 were filed with administrative cases.

In the event that establishments receive NOVs twice, the violating firms will face criminal charges. Their licenses and permits to operate will also be revoked.

Based on the recent monitoring done, the FTEB found all cement products sold in monitored establishments to be conforming to the standards and proper markings set forth by the Bureau of Philippine Standards (BPS). Trade Secretary Ramon M. Lopez says, “DTI’s heightened presence in the market sends a strong message to both consumers and business that we are serious in our campaign against uncertified and substandard materials. Finding no non-conforming products such as cement and steel in the establishments that we monitor means that quality goods are being sold to the public. The protection of consumers is our utmost priority and we remain steadfast in our commitment.”

Earlier, the DTI announced that it is shifting its Import Commodity Clearance (ICC) sticker verification to a mobile application to assist enforcers and monitors during market enforcement activities, as well as consumers in verifying a certified product and detect fake from real ICC and Philippine Standard (PS) stickers.

In view of a whole of government approach, the DTI officials led by Secretary Lopez discussed with Department of Interior and Local Government (DILG) Secretary Eduardo Año the arrangements that will allow local government units’ participation in monitoring substandard products in the market as well as in enforcing penalties against establishments selling non-compliant products.

|As to the warning by a certain consumer group on the alleged proliferation of substandard imported cement from Vietnam, DTI-Consumer Protection Group Undersecretary Atty. Ruth B. Castelo clarifies that, “Even in the absence of such warning, the Department remains vigilant and on top of matters pertaining to the quality of products. DTI’s intensified monitoring and enforcement efforts definitely include going after unscrupulous importers, traders, and retailers that intentionally disregard the mandatory product certification scheme of the BPS.”

Correspondingly, the DTI increased the frequency and scope of its monitoring and enforcement activities this year especially in the regions and provinces. The FTEB, in collaboration with the BPS and the DTI-Regional Operations Group (ROG), have already covered Regions 3, 4A (CALABARZON), 7, and the Cordillera Administrative Region (CAR). The rest of the provinces are plotted within the remaining months of the year.

The DTI reminds the consumers to remain vigilant and to report immediately the presence of violative products in the market and any unconscionable sales act and practice of business establishments via the DTI Consumer Care Hotline 1-384 (1-DTI) or email, consumercare@dti.gov.ph.