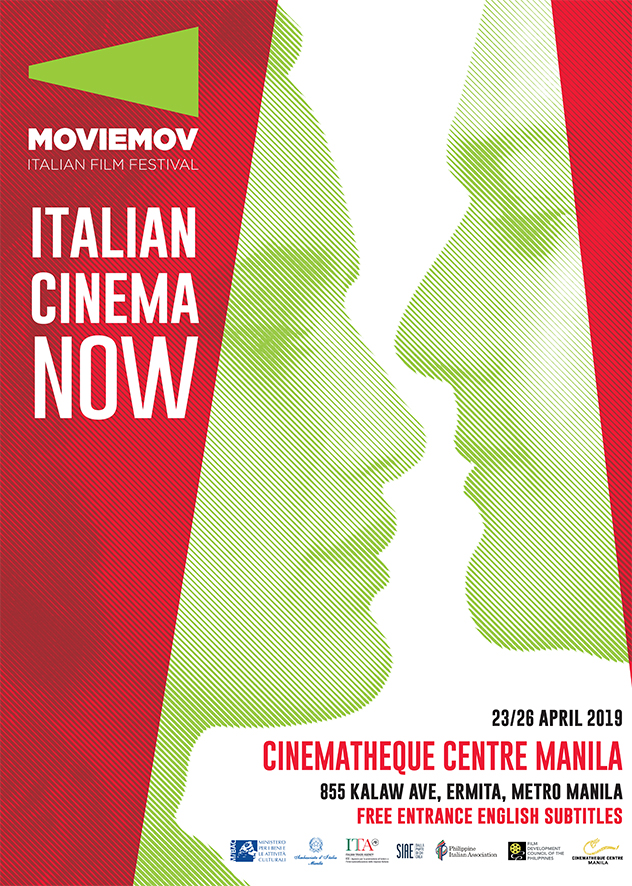 Italians are not just known for sumptuous pizza and pasta, but also beautiful films like La Dolce Vita, Life Is Beautiful, Cinema Paradiso to name a few.

From April 23 to 26, the public can watch free movie courtesy of  the Moviemov Italian Film Festival.  It will run for free an itinerant showcase that aims to build a cultural and commercial platform to promote abroad the new italian cinema, with particular attention to the flourishing asiatic market, so rich of new opportunities.

After the successful past editions, Moviemov Italian Film Festival will be back in Manila for the fourth time from April 23rd to 26th focusing on art films and introducing a delegation of awarded authors from the most important international festivals.

Created and directed by Goffredo Bettini, President of Auditorium Parco della Musica and founder of Festa del Cinema di Roma in 2006, and organized by Playtown Roma – an association that also follows Alice nella città, parallel and independent section dedicated to the young authors, Moviemov is realized thanks to MIBACT (Direzione Generale per il Cinema del Ministero per i Beni e le Attività Culturali Italiane e Turismo), SIAE (Italian society of Authors and Editors), and with the collaboration of Philippine Embassy, the Philippine Italian Association and Film Development Council of the Philippines.

This edition will be focused in particular on AUTHORS FROM REAL CINEMA presenting at Cinematheque Center Manila – that recently hosted a selection of films presented in Venice Film Festival – 8 representative and awarded films from the past Italian film season introduced by actors, directors and film critics; among them Lorenzo Richelmy (who plays Marco Polo in the namesake Netflix TV series) will present the opening film Una questione privata by Paolo e Vittorio Taviani, based on a novel by Beppe Fenoglio and presented in Toronto Film Festival in the Masters section; Silvia Luzi and Luca Bellino (directors of La minaccia and L’arte della guerra that participated in over 50 international film festival) who will present in Manila their last film Il Cratere after the successful presentation in Venice Film Festival in Settimana della Critica section, and after winning the Special Jury Award at International Film Festival in Tokyo; Agostino Ferrente (founder of Pirata Production and director of Le cose belle presented in Venice Film Festival) will present his last documentary Selfie, showed during last Berlinale.

Also the new Italian talents will have their space: Federica Sabatini (part of the main cast of the 2nd season of “Suburra – La serie” online on Netflix Italia) will introduce Saremo giovani e bellissimi together with producer Daniele Orazi, a film selected in the last edition of Settimana della Critica in Venice Film Festival. Sponsor of this edition will be Silvia D’amico (Non essere cattivo, Il rosso Blu, Fino a qui tutto bene, The Place and many other titles): one the most promising talents of Italian contemporary cinema.

The Festival will be focused on the educational element and on Yesterday’s cinema, and will include an encounter with the students titled Italian and Philippines Cinema Now and a Masterclass held by the film critic Mario Sesti regarding Bernardo Bertolucci’s cinema, the Academy Award-winning director, writer and producer, one the greatest Masters of Cinema of all time.

Below the selection of Italian films:

The access to the screenings will be free and the films will be in original language with english subtitles.

They will introduce the films, they will participate in the encounters with the audience and the students, with a view to the educational component of the Festival.