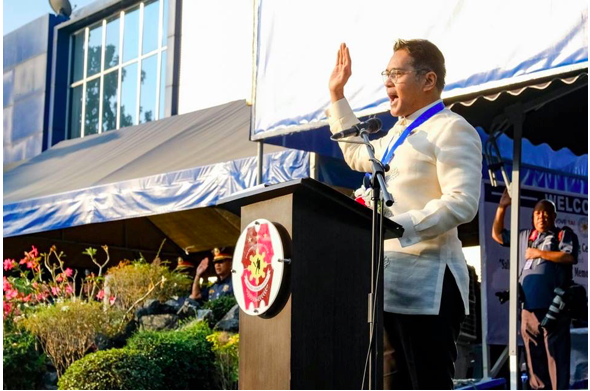 Award-winning international actor John Arcilla who has played many iconic roles including Heneral Luna showed his support to the Salute to a Clean Flag movement by taking part in the Flag Raising ceremony that commemorated the signing of the Memorandum of Agreement by significant government agencies and representatives in an effort to display an abundance of clean flags in the country.

A campaign started by Monique Pronove of Pronove Tai International Property Consultants, the Salute to a Clean Flag Movement has brought together both the private sector including Ayala Land Corp and the public sector such as the National Historical Commission of the Philippines and the Philippine National Police as an effort to revive Patriotism.

For John, who has long been a proponent of patriotism as displayed in the roles he has chosen, believes in the goal of the Salute to a Clean Flag Movement, “Today more than ever do we need to be reminded of what our heroes before us has done in order to give us the freedom that we have today. By proudly displaying our flag we not only give honor to them but we are also reminded to love and care for our country and do everything to we can to protect it and promote it.”

John then encourages the public to display their clean Filipino flags proudly as a way to support this endeavor. To know how you can do so, you may visit Salute to a Clean Flag’s Facebook page.