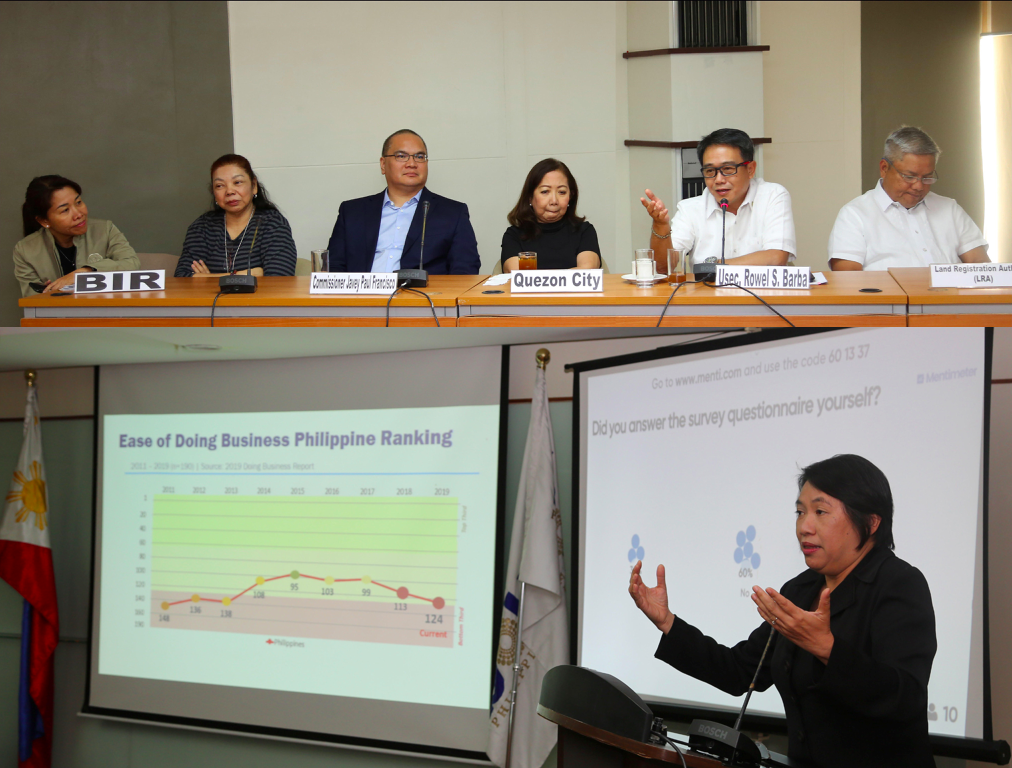 To clarify the report made by World Bank’s 2019 Doing Business (DB), the Department of Trade and Industry spearheaded a communication campaign in its bid for better results in the 2020 cycle by reporting to the public, the various Ease of Doing Business reforms initiated by various agencies of government.

DTI organized a briefing of respondents which participated in the 2019 DB survey composed of lawyers, contractors, accounting firms, and other professionals. Key officials from SEC, BIR, LRA, and the QC Government presented the various programs, and policies issued by agencies aimed at promoting efficiency in government.

“We are proud of the reforms instituted by the Legislative, Executive, and Judicial branches of government to promote Ease of Doing Business. We need to catapult the Philippines, and we need Congress, the Supreme Court, and the executive branch to closely work together,” Undersecretary Barba said.

The trade undersecretary’s statement was in reference to the recent enactments by the legislative and the Supreme Court. Three of these major reforms were the Revised Corporation Code, Personal Property Security Act, and the Supreme Court’s new rule on small claims coverage. DTI is looking to the three and their resulting initiatives to have an impact on the country’s performance in the 2020 survey and succeeding survey cycles.

The Revised Corporation Code, signed into law on 20 February 2019, removes the minimum paid-in capital requirement, promotes electronic filing of articles of incorporation, and directs the SEC to issue rules and regulations to protect minority investors and improve corporate governance in accordance with international best practices.

Businesses will also have greater access to credit through the Personal Property Security Act, which allows borrowers to use other personal property like inventory, accounts receivable, and agricultural products as collateral.

Meanwhile, the Supreme Court’s increase in the amount covered in small claims cases from Php300,000 to 400,000 will allow more cases to be filed in Metropolitan Trial Courts and reduce the costs associated with debt collection.

During the briefing, SEC Commissioner Jayvee Francisco presented the Lane for Express Application Process (LEAP) which will drastically improve the processing of simple applications. The Bureau of Internal Revenue (BIR) meanwhile reported on the issuance by the Commissioner of Internal Revenue Caesar Dulay of Revenue Memorandum Circulars 6-2018, 19-2018, 27-2019, and 29-2019 streamlining requirements and procedures to allow new business taxpayers in QC to immediately start its business operations while waiting for the printing and delivery of its receipts/invoices by BIR accredited printers.

Undersecretary Barba said these reforms are in line with the President socio-economic Agenda, to promote competitiveness and ease of doing business, adding that, “Beyond our objective of improving the Philippines’ rank and score, the steps we have taken signify our commitment to create a competitive business environment and foster innovation and entrepreneurship. We are confident that the reforms initiated by the Supreme Court, Congress, and the executive branch will make doing business in the Philippines easier”.

DHL Express to implement an average rate increase of 7.9% in 2023 for Phl market