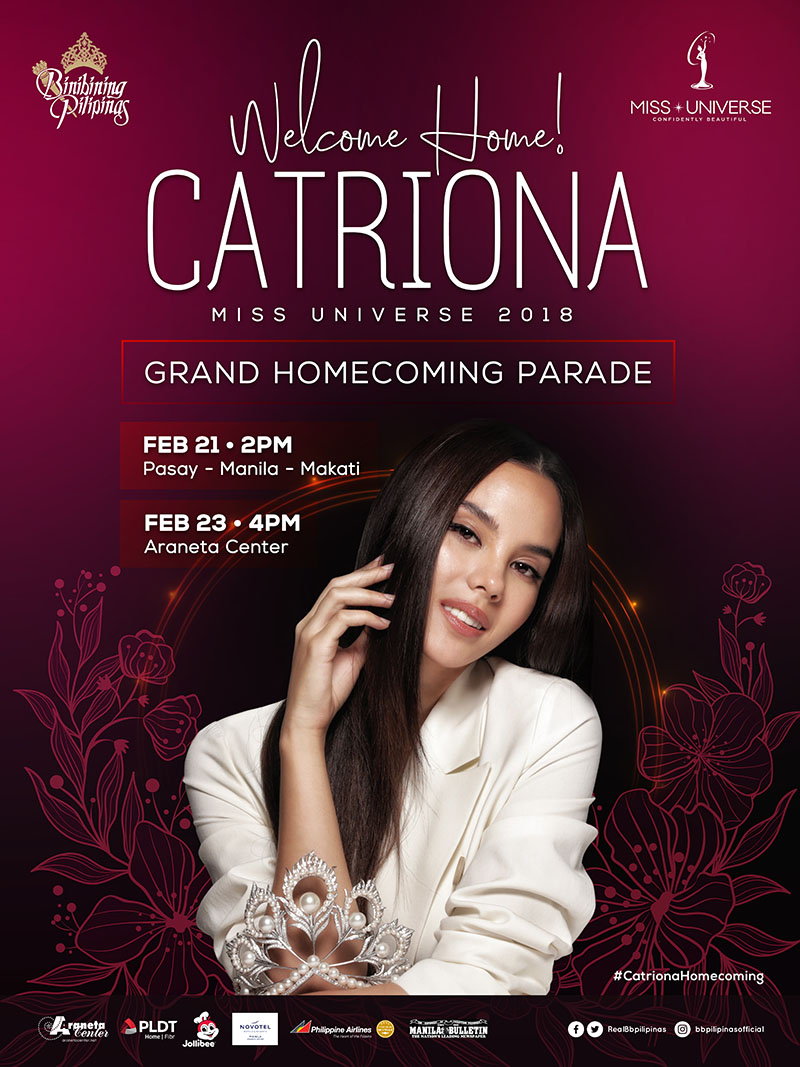 Miss Universe Catriona Gray’s homecoming to be celebrated with festive parades, charity visits
The Binibining Pilipinas Charities, Inc. (BPCI) and the Araneta Center, in close coordination with the Miss Universe Organization, have been planning a series of activities for Miss Universe 2018 Catriona Gray’s grand homecoming that is truly fit for a queen.
All happening this February, thousands of fans and supporters can expect to see the reigning Miss Universe during two victory parades that will showcase her triumphant return to the country. On February 21, Thursday, Catriona will board a majestic float and parade around the cities of Pasay, Manila and Makati. The parade will start at 2 p.m.

Starting at the Cultural Center of the Philippines (CCP) grounds in Pasay City, Catriona’s parade will proceed to Roxas Boulevard, Kalaw Avenue in Manila, Taft Avenue, Buendia Avenue, and end on Ayala Avenue in Makati City.

People are already eagerly anticipating what the float will look like, with some speculating the design to either look like her diamond and pearl-encrusted Mikimoto crown or her magma-inspired evening gown by Mak Tumang.

On February 23, Saturday, Catriona will have another parade, this time at the Araneta Center where her journey to the Miss Universe crown started. Festivities start at 4 p.m.

The parade will start at the Novotel Manila Araneta Center and will go through the main road Aguinaldo Avenue, and around the 35-hectare lifestyle hub before making a stop at the Green Gate of the iconic Smart Araneta Coliseum, where she won the Miss Universe Philippines crown in March last year.

Fans are encouraged to gather on the streets on these dates to greet Catriona and show their support that’s filled with true Filipino pride.

Similar to Pia Wurtzbach, who brought joy to the country when she won the Miss Universe crown in 2015, the 25-year-old fashion model, advocate and aspiring musician from Albay will also headline a thanksgiving show on Sunday, February 24, at the Smart Araneta Coliseum.

Staying true to her core advocacy of helping underprivileged children as well as those living with HIV and AIDS, Catriona will visit and bond with the beneficiaries of Young Focus, LoveYourself PH and Smile Train—organizations closest to her heart—with BPCI Chairperson Mrs. Stella Marquez Araneta.

Catriona is also scheduled to have courtesy calls in the offices of some of the country’s most prominent leaders including Vice President Leni Robredo.