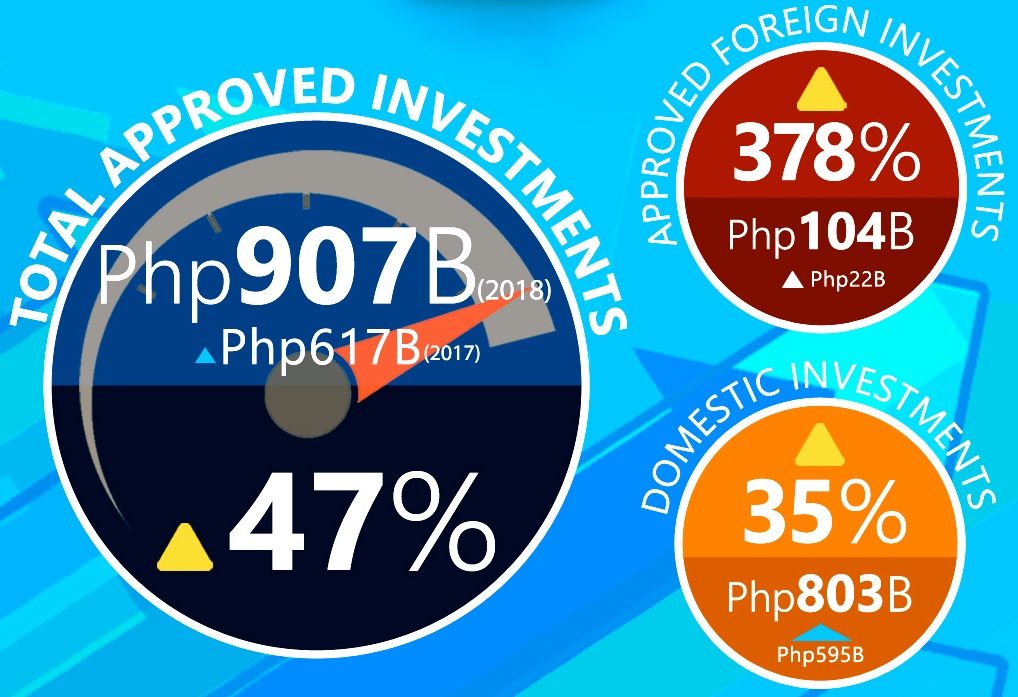 The final figures on investment in the Philippines break the past expectations ending the year with another record-breaking accomplishment.

Philippine Board of Investments (BOI), the country’s premiere industry development and promotion agency, ended the 2018 with Php907.2 billion in investment approvals, a strong performance easily surpassing the previous all-time mark of Php616.8 billion in 2017. The unprecedented figure is up 47.1 percent year-on-year.

“We hit another record-breaking investment in BOI’s 51-year history, beating the P617 billion in 2017 by a wide margin,” said Trade Secretary and BOI Chairman Ramon Lopez.

“This new historic mark breezing past last year’s record figure not only reaffirms but further strengthens investor confidence under the Duterte Administration. We were initially expecting to at least attain our target of Php680 billion for the year, instead we were able to more than double the Php442 billion investments level in 2016,” said Secretary Lopez.

“More important than the record-breaking investment level is the strategic importance of these approved projects. This will result in industrial empowerment, particularly with the upstream, heavy industrial projects that will allow us to expand our capability to manufacture finished goods currently not produced in the country. Together with the investments in key logistics, infrastructure and power projects including LNG terminals, these approved projects will strengthen the local industrial production base as it impacts on improving the general level of competitiveness of Philippine industries and pushing development to the regions,” he said.

“Equally significant is the positive effect of these projects in addressing the problem of widening trade deficit. As the country continues to grow, demand for industrial products increases. Currently, for certain key categories, demands are mainly met thru imports. The agency firmly believes that the best trade strategy is a robust industrial development policy. In addition, BOI also approved projects critical to addressing social issues—including housing and availability of health services. Special attention was also given to enhancing the productivity and competitiveness of agricultural commodities, for instance thru Triple A slaughterhouses as well as modern cold-chain facilities,” said Secretrary Lopez.

“The investment surge is led by the manufacturing sector which rose more than four-fold to Php409.3 billion from just Php96 billion last year,” he said.  Secretary Lopez also mentioned the other strong performers which include the transportation and storage that surged 626 percent to Php129.6 billion from just Php17.8 billion in 2017, the water and sewerage sector with an exponential 1,494 percent increase to Php14.3 billion from Php894.4 million a year ago, the retailing sector with Php8.1 billion from Php2.7 billion and the accommodation sector with Php39.9 billion from Php11.3 billion. The surge in investments in these sectors is important as it helps build a much larger production capacity for the future that will create more jobs for Filipinos as well as reduce the country’s trade balance with more import substitution and greater export capacities,” Secretary Lopez added.

“Given the epic surge in investments for 2018, it is but inevitable to aim for another historic milestone—the trillion mark next year. We are confident of hitting yet another growth in investment registrations next year with the impending entry of big-ticket projects as concrete fruits of the Administration’s investment roadshows,” said Trade Undersecretary and BOI Managing Head Ceferino Rodolfo.

Undersecretary Rodolfo further said that the approved projects have boosted the dispersal of investments to the regions as most projects are outside Metro Manila with total regional investments accounting for 86 percent of the total figure. Region X (Northern Mindanao) took the crown with Php228.8 billion, up a stratospheric 3,063 percent from Php7.2 billion a year ago and accounting for a quarter of the total figure. Coming in second was Region IV (CALABARZON) with the Php185 billion. Region III (Central Luzon) placed third with Php169.3 billion. NCR took fourth spot with Php123.6 billion, constituting 13.6 percent of the aggregate approved investments. Other performers include Region VII (Central Visayas) with Php61 billion, Region XIII (Caraga) with Php58.2 billion and Region XI (Davao Region ) with Php18.8 billion.

China topped the list of foreign investors for 2018 with Php48.7 billion worth of investments, up by a skyrocketing 8,364 percent from just Php575.8 million last year. Other standouts are the British Virgin Islands which accounted for Php15.6 billion, sourced through the renewable projects of Pulangi Hydro Power Corp and the projects of Victorias Milling Company and two mass housing projects of Raemulan Lands, Inc. Singapore came in strong with a capital inflow of Php13.6 billion mainly through Vires Energy Corporation. Indonesia was next with Php7.5 billion mostly through Citra Central Expressway Corp., Japan (Php4.2 billion) by way of Toyota and Mitsubishi projects and Malaysia (Php2.9 billion) through retailing.