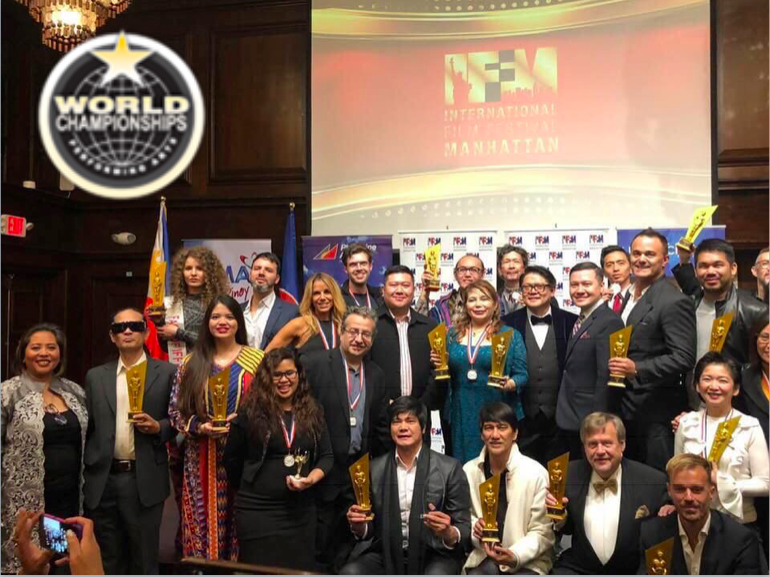 New York, USA – The 8th Annual International Film Festival Manhattan (IFFM) 2018,  that attracts a lot of Filipino American audience because of it’s programming of numerous Filipino, was sponsored this year by LumoXchange and Philippine Airlines. The festive IFFM was held in New York City on October 17 to 21, 2018 at various venues that are in the reach of Filipino community members. The Opening night was held on October 17 at the Elmhurst Baptist Church 87-37 Whitney Ave Elmhurst NY 11373 featuring the faith based film “One Nation Under God” (USA) Dir: Lisa Arnold. The Awards Night was held last October 18 at the Kalayaan Hall, Philippine Center 556 5th Ave NY, NY 10036 featured the film “Sekyu” (Philippines) Dir: Joel Lamangan. Last October 19 to 21 the regular film festival screenings were held at the historic Producers Club 358 W 44th St NY, NY 10036.

From hundreds of submissions the festival showcased a quality selection of world class films that encompass all different genres of diverse films – narrative features, documentaries, shorts, music videos and student films. IFFM featured a lot of films from the Philippines including France, Italy, Sweden, Bulgaria and Canada. Website: IFFMNYC.com

“LumoXchange was founded to help U.S. immigrants send more money to their family back home,” said LumoXchange Founder and CEO Maf Sonko. “We are proud to be a sponsor of the 8th Annual International Film Festival Manhattan and celebrate the dynamic and vibrant culture of Filipino-Americans through film.”

“As October is Filipino-American History Month, LumoXchange is thrilled to be a presenting sponsor of IFFM — an organization that creates opportunities for our kababayan to showcase their creativity,” said Joshua Ang Price, LumoXchange Director of Marketing and Growth.”   website: lumoxchange.com (Register and Use Code: IFFM for a chance to win $100 gift certificate)

As per Josh Vasquez, PAL Area Manager – New York  ” We are excited to be part of the IFFM 2018 and would like share with our fellow Pinoys about the good news! Philippine Airlines will start flying NON-STOP between New York and Manila starting Oct. 30, 2018. Experience the fastest, most convenient and affordable  way of flying to the Philippines on board a state-of-the-art aircraft, the Airbus 350-90, through the heart of the Filipino– Philippine Airlines.” Website: PhilippineAirlines.com

5) IFFM Most Popular: “Who Am I” Dir: Mark Justine Aguillon (Philippines)

Dir: Mariz Umali “I Witness – Behind The Banquet” (Philippines)