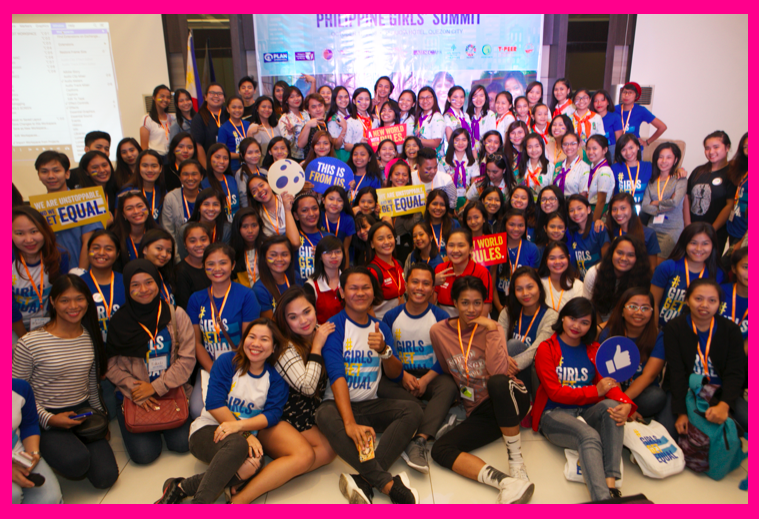 In this highly competitive world, Girls don’t need to compete with the Boys.  One of the speaker who talked about girls’ empowerment said, “Boys are not enemies, they are allies”.

From this axiom, a brilliant idea was born thus the theme “Girls get equal” came into being.

On October 11, it was the National Day of the Girl and Plan International Philippines held its first ever Philippine Girls Summit at Sequoia Hotel in Quezon City.

The summit was attended by more than a hundred empowered girls under various organizations that aim to be heard with one voice saying “Girls Get Equal”.

To further make a point, one of the symbolical highlights of the event was to put on a “face paint” with the “equal sign” on their right portion of the face of all the participants representing their clamor for equality.

Despite of the fact that we are already in the digital age, many girls still feel that d there are still some chauvinist individuals who seem to underestimate the girls and tag them as “weak ones”. For this reason, the inevitable happens, girls are then catcalled, harassed and even treated as second class citizens as if we are still in the medieval times. This is the reason why the call for Gender Equality has become prevalent even in some  most conservative countries like Middle East.

Plan International, a non-government organization who advocates and supports the rights of every  girl. Not just their rights but also their safety and welfare. At Plan International, the girls are taught to be empowered and instill the importance of their rights for equality by also helping them to be informed about what to do during in times of abuses. This is what the girls rights advocates have been doing in more than 70 countries all over the world.

In this year’s summit, the strong desire for a better and safer world for girls, and mission to do its best to provide safer cities for girls all over the world floated, the speakers provided valuable information that made the participants excited and attentive.

Moreover, there are different organizations and their representatives who took part of the summit like She Talks Asia who discussed about how to empower oneself and to love your body by taking care of it. The UN Girls on the other hand talked about the importance and the must of having safer cities for Girls. While the Philippine Commission on Girls tackled about advancing Girls’ advocacy in the Philippines.

The other organizations that joined with the same advocacy are  Y-PEER Pilipinas, AISEC International, Girl Scout of the Philippines and Girls Got Game who empower girls through sports.

Sharing the same advocacy, Girls Got Game helped the girls to be equipped with the right attitude and mindset by leaving a remarkable line that says, “Society is tough but girls are tougher”.

In celebration of the International Day of the Girl, it was expected that with the provision of equality in the society also comes with responsibilities. While you are a girl, you can do more than what the society is telling you, you are unstoppable and influential you are making this world a better place.

In a nutshell, the Girls Summit stated their position and call to their our allies (boys) who sometimes failed to check their manners, catcalls that lowers girls’ esteem, harassment that destroys girls’ dignity, and a lot more misconducts that should not be taken as a joke.

Thus, the claim or idea “boys would be boys” must not be typecast and used as an excuse to exploit the girls or make any innuendos. The call for the boys to behave like real gentlemen are strong because the girls believe you are more than being boys. You are our ally who helps us grow as a girls with chin up high and confidence that in this society we are safe even we are alone with you.