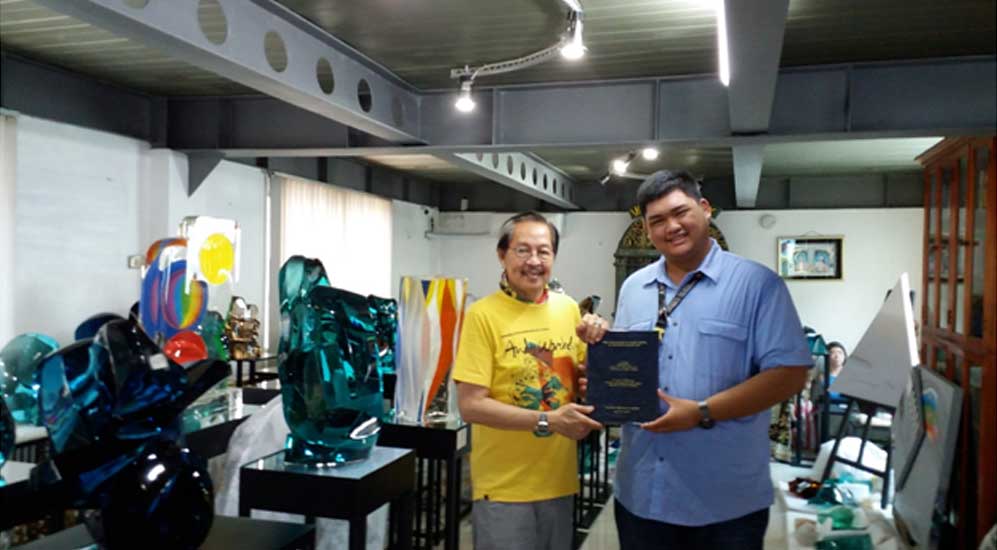 The author submitting a copy of his thesis to Mr. Ramon Orlina at Orlina Atelier. May 3, 2017.

That 18 feet bronze beacon-like sculpture which stands out from a sea of gray and beige buildings always caught my attention. Pillared by four neoclassical nudes with their genitalia surreptitiously wrapped by huge ribbon, which could have earned the shock and censure of the Dominican friars, and topped with an armillary sphere. Then cascades an assemblage of emerald glass that glitters from the top down the base.

Through night and day, whether the sun scorches or tempestuous rains come, or even losing its honey lustre but earned an ombré patina, that sculptural composition still stood strong with its emeralds intact and gleaming brighter.

I could say that this monument not only “shattered” – not in the “fragile” sense – the University of Santo Tomas’s image of being an outdated, conservative, and “ultra-Catholic”school but purveys UST as a “fusion of horizons”: looking onward to progress and promise of the future while remaining grounded on its history, scholasticism, virtues and traditions.

It also shattered this author’s writer’s block for coming up with a good thesis topic on who is the artist behind this sculpture?

This is how I got to not only know the Quattromondial but its creator, Ramon Orlina.

Before the age of glass

The relationship between Ramon Orlina and glass goes way back to the very confines of his ancestral home in Taal, Batangas. He noticed that its window panes were not graced with capiz shells but with glass. There he discovered that his great-grandfather, Antonio Medina was known in Taal for making hand-painted room panel dividers and he uses glass as its adornment. Artistic genes also flows in Orlina’s blood in which Jim Fernandez, the mind behind the iconic comic book series Zuma, was his uncle. Even as a young boy he had an eye for art and was inspired by the flora and fauna of Taal.

However practicality made him take up architecture at the University of Santo Tomas. During his educational upbringing, he was exposed to Modern Architecture and the Bauhaus Movement with Le Corbusier and Ludwig Mies van der Rohe as its champions and espousing their collective dictum, “form follows function”. Function, structure and geometric designs overweighs aesthetics and ornamentation.

“You must have a good design but if it cannot be built then you will have a problem. In architecture, function is as important as the design; it’s no good if it doesn’t work”, Orlina recounts the advantage of his architectural background in his art. Yet his artistic sensibilities, most particularly his predilection towards glass was strengthened for the modern architect’s constructive mediums were glass and steel.

Armed with his college degree in 1965, he was soon employed at the prestigious firm of Carlos Arguelles. Eventually becoming his own man, Orlina left the firm and started his own architectural practice. He would incorporate glass in his architectural designs, making it his “signature mark”.

Alas in 1972, when President Ferdinand Marcos declared the whole archipelago under Martial Law the majority of Ramon Orlina’s clients fled for their lives. Business inactivity took its toll and eventually left his practice in shambles. But it was an opportune time for the young Orlina to follow his artistic impulses and used the medium he grew up and studied with. Reflections, Paintings on Glass in 1975 was his first solo exhibition and served as his starting point in dominating Philippine art. Lady Luck was also at his side, when his glass art caught the eye of Victor Lim, then-president of Republic Glass Corporation.

Impressed by Orlina potential and his 25 glass works, Lim offered him an overseas scholarship to cultivate his art. After a week of consideration, he respectfully declined Lim’s offer. Ramon Orlina eschews the Filipino trait of “utangnaloob”. He knew that there is no such thing as “free lunch” for in the end he has to pay with his art.

Foresight is not only Orlina’s diskarte but he knows when to take an opportune time. He made his counter-offer to Victor Lim, “I want to know about glass and I can only know it if you let me into your factory. I’ll study it on my own.”

Conceptualizing, cutting, grinding, smoothing and polishing – these are the steps of Orlina’s cold process of glass sculpting. A brainchild of his stint at Republic Glass Corporation’s factory. He perseveres to study his medium’s artistic potencies, observe its scientific properties, and empathize its sensibilities and weaknesses.

“Well I do my sculptures, I really don’t have sketching or I don’t sketch of it. I look at the glass and sometimes what I can get out of the glass”, the sculptor describing his mode of conceptualization. Orlina maintains the classicist lens as his mode of seeing the glass cullet but at happenstance the medium itself dictates its own form and identity. They are both locked at an artistic tug-of-war. Just as how gem smiths carve raw stones, Orlina uses diamond cutters and silicon carbide powder to liberate the glass cullet’s form and shave off its obstructions. The raw cut form is then subjected to a grinding machine that will rough out the surfaces and edges. To give the sculpted cullet its lustre, smoothness and brilliance, numerous craftsmen handle the final process of smoothing and polishing. It takes a month for Ramon Orlina and his team of craftsmen to accomplish and finish a sculpture, depending on its size and style.

An imperfection, blemish or mere dissatisfaction by the sculptor would mean three weeks of reshaping, grinding and polishing. To emphasize uniqueness and distinction of his works, Orlina directly sketches and carves the glass. He doesn’t illustrate his ideas and sculptural frameworks to prevent mass forgeries and repetitions of his works.

While he was not mentored on the art of glass sculpting or trained by any artistic maestro, Ramon Orlina gleans from the artistic milieu of his times from modern architecture, having its profound effect on him, to artists such as British sculptor Henry Moore, architect Frank Gehry, Taiwanese sculptor Ju Ming, and National Artist Manansala as one of his primary inspirations.

Though Orlina dipped in the artistic pool of his time, nevertheless his sculptural philosophy goes through temperament, self- internalization, and development thus making it his own. There are common philosophical denominators that appear behind his sculptures namely, the unity and harmony of form, meaning there should not only be a coherence of sculptural forms but of the physical holism of interior and exterior of the glass, multidimensional perspective, the viewer can see a glass sculpture from different angles and viewpoints, and the role of light and glass’s fourth dimensionality, which Orlina states that “the life of a piece of sculpture depends on the light. The incisions become an integral part of the design.”

Tempered by time, technique, and imagination, the constitution of Ramon Orlina’s work ranges from the prismatic and architectural to the mellifluous and curvilinear.

For his large scale works, Orlina wanted to shatter the “elitist conception of art” in the psyche of the Filipino public and infuse the “sense of art appreciation.” One doesn’t only have to scour the art galleries to find an Orlina piece, for they are found in our public museums and spaces. His major public sculptures in the country are Arcanum XIX: Paradise Gained inside the National Museum, the Greenbelt Lagoon Chapel (which he served as the chapel’s interior designer), Stations of the Cross at the Benedictine Abbey Church, Alabang, Tabernacle and Risen Christ at the EDSA Shrine and Chapel, and Quattromondialat the University of Santo Tomas. Even in Singapore, Ramon Orlina left an indelible mark with sculptural monuments such as Fertile Crescent located at the Marina Park, Singapore Indoor Stadium and Quintessence, a bronze and crystal installation at the Singapore Art Museum. One can observe that most of his monumental works are artistic marriages of glass and steel, an homage to Modern Architecture

Another way of seeing Orlina’s glass magic is visiting the four storey Museo Orlina at Tagaytay City. A kaleidoscope of different glass sculptures is seen inside and one can trace the artistic development of Ramon Orlina’s work. It ranges from geometric and faceted sculptures, curvilinear and sweeping pieces, mellifluous yet enticing female torsos and whimsical glass and metal installations. Yet, the true beauty of these glass sculptures is not only by appreciating the outside but one can dive and see the inside. Viewers are enticed to see what illusion an Orlina sculpture contains. Escher-ine stairways, internal kinetics, mellifluous curves, seductive sweeps and undulations are some of the things what can people see.

Foresights beyond the glass

“No, because the artist has no retirement!”, a dauntless sentence that came out of Ramon Orlina’s mouth when I asked about slowing down or retiring from his work.

Even though his forty year contribution to Philippine modern art is magnanimous, Orlina remains to be a humble beginner of his sculptural art. The sculptor never remains complacent to his current style and so he continuously attunes himself to contemporary times and experimenting new techniques and mediums.Recently, Orlina has given homage to his former art of glass painting in which he incorporates it in his glass sculptures, thus becomes a “three-dimensional painted sculpture”. Instead of painting glass sheets, the sculptor uses his sculpted Schott optical glass as his canvas and paint enamel. He also dabbled in the craft of jewelry making in which he uses Swarovski lead crystals which are then held in a metal framework. All of these new sculptural innovations are seen at Museo Orlina.

Ramon Orlina ideally wanted to establish a “school of glass arts” to teach the Filipino first and pass on the torch of Philippine glass sculpture. But due to the scarcity of his medium, sculpting equipment, and space, this idea was placed in the back burner for the meantime. So another way of sharing his art was establishing the MuseoOrlina and luckily his artistic genes are passed on to his daughter, Anna.

Reflecting on today’s Philippine art scene, the sculptor is proud to say that young Filipino artists are discovering new techniques, possibilities and mediums while having their own style, identity and form. Unlike during his time, Philippine sculpture rested only in the shoulders of Guillermo Tolentino, Napoleon Abueva, Eduardo Castrillo, Solomon  Saprid, and of course himself.

In my crystal clear opinion, Ramon Orlina should not only be remembered for blazing the trail of Philippine glass sculpture, the significant works of art that he produced from his creative process and philosophy or the numerous accolades he has received.

Ironically, he should be remembered as the one who shattered glass ceilings. These ceilings that were manifested not only in the form of popular constructs and notions of glass or of its artistic limitations set by Philippine modern art but he shattered the popular fact that contemporary glass sculpture is a progeny of both Europe and North America.

Contemporary glass sculpture also shines in the Philippines, in the form of Ramon Orlina.

German culture at its best at Goethe-Institut Open House, Aug. 31