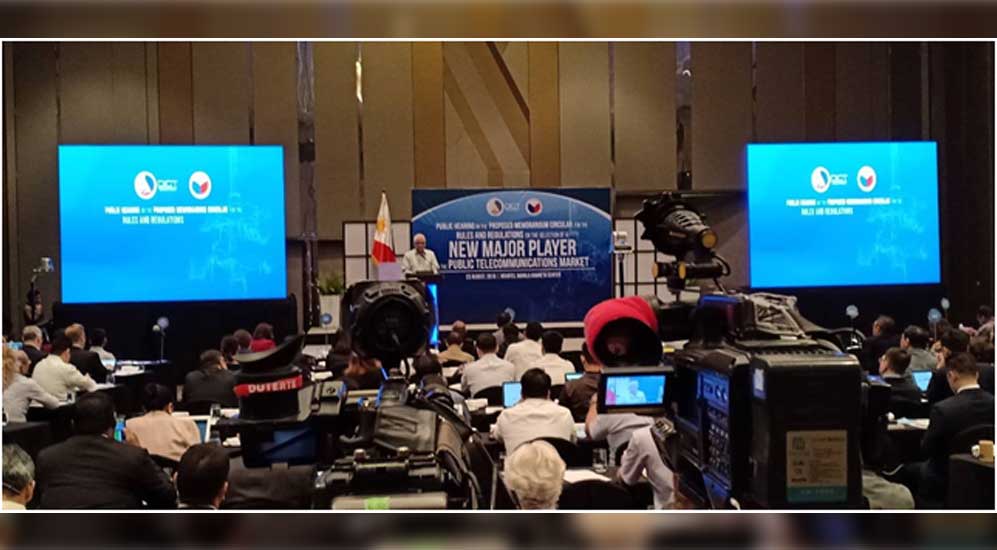 The Department of Information and Communications Technology (DICT) Acting Secretary Eliseo M. Rio, Jr. was very happy with the outcome of the public hearing held at Novotel Araneta Center, Quezon City on August 23 about the selection process for the new “third major player”in the telecommunications industry.

Rio said to THEPHILBIZNEWS, “If there are companies ready to compete with Globe and Smart, why not? Why should we wait for the others to join? For those who did their homework means they are more serious than those who are coming Johnny come lately”.

The Acting DICT Chief said in the public hearing in the context of the government’s timetable for selecting a third player by December. It was the first public hearing to finalize the memorandum circular on the terms of reference (ToR) which will govern the selection process.

He also made sure that whatever terms of reference that were formulated was international standard duly audited by the international body, hence, others need not have to worry about the ToR.

There were several issues that were brought up during the public hearing and one of them was whether on 2022 when there is a new administration already, will the contract be honored after the term of President Rodrigo Duterte. The answer was yes, as long as the compliance on ToR are met and there would be no arbitrary rescinding of the contract once it is finalized and have been dutifully following all the agreed terms and conditions.

As for the timeline whether it is still achievable or not, Rio said, “Actually we would like it to be even earlier. Even for the public, December might be too late.”

He noted that are three or four applicants would be sufficient for a competitive auction, which the DICT has scheduled for the fourth quarter. Bid documents are expected to be ready by Sept. 26.

Rio said that DICT has been prepared to accept applicants who can participate in the auction immediately followed a question raised during the hearing that a US company may need six months to prepare for a bid. Rio expressed his preference to gauge bidder interest in the frequency currently on offer, rather than add more spectrum for the use of the third player.

“When the third player comes to the market, it has certainly no subscribers yet. It would take around six months for them to hit 1 million. So they don’t need that much frequency,” he added.

Meanwhile, the Philippine Competition Commission (PCC)’s warning that the draft ToR as written might trigger a review of the transaction if the PCC’s suggested changes are not incorporated, Rio said the DICT will adopt the PCC’s suggestions, as these are expected to smooth the process of welcoming a third player.

Last week, PCC Chair Arsenio M. Balisacan said that the agency may waive its 90-day review of the winning bidder if the DICT adopts its recommendations for the ToR because PCC wants a more precise definition of “Related Party,” a prohibition on mergers, combinations or becoming a related party to an incumbent, a rule governing the return of frequency, and the claw back of spectrum in case of non-use, among others.

According to Rio, 15 telcos are participating in the bidding because they have congressional franchises and are not affiliated with Globe or Smart. So far these are the identified potential companies bidding to be the third major players: Philippine Telegraph and Telephone Corp. (PT&T), NOW Corp., Converge ICT Solutions, Inc., Transpacific Broadband Group International, Inc. (TBGI), Easy Call Communications Philippines, Inc. and TierOne Communications International Inc. For the international companies, Rio mentioned China Telecom, South Korea’s KT Corp. and LG Uplus Corp., an unidentified Japanese company, Vietnam’s Viettel Telecom, Norway’s Telenor Group and an unidentified US company.

The government sees the need to have a new third player to compete with Smartand Globe. The selection process oversight committee will choose the new third major player based on the highest committed level of service, with points awarded for capital investment plans, percentage of the population served, and broadband speeds achieved over a five-year roll out.

If chosen, the third major player is subject to audit and must complied with the terms of reference, Rio said in closing to ensure that the service and customers are served according to their commitment.