BOI FDIs up 165 percent in first sem of 2018, contributes to 27 percent increase in BOI-registered investments 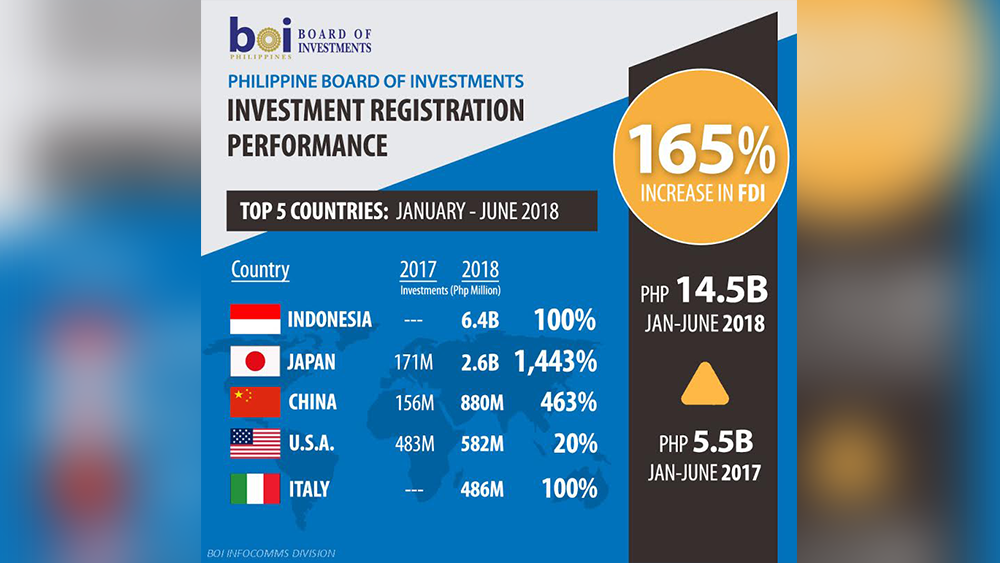 FDIs approved by the agency grew to Php14.5 billion from only Php5.5 billion in the same period last year. The growth in FDIs contributed to the overall increase in BOI approvals as investment projects approved by the agency reached Php238.9 billion in the first semester of 2018, up by 27.1 percent compared to the Php188 billion recorded in the same period last year.

By country, Indonesia topped all foreign investors with Php6.4 billion, followed by Japan with Php2.6 billion, and China with Php880 million. The United States (Php582 million) and Italy (Php486 million) came in as fourth and fifth placers, respectively.

“The impressive investment registrations with the BOI is a concrete proof of the continued confidence of both foreign and local investors in the country,” said Secretary Lopez.

He said that the strategic nature of investments registered with BOI and the strong confidence of investors is very much linked to the administration’s policies which are independent and pragmatic, but principled in addressing the critical social problems and bottlenecks to industry competitiveness such as infrastructure and power.

The Philippine economy will continue to grow and create investment opportunities in infrastructure, manufacturing, and services. With this growth, we intend to have more inclusive businesses and ensure that economic gains are spread throughout the country,” Secretary Lopez added. Trade Undersecretary and BOI Managing Head Ceferino Rodolfo stressed that the BOI investment figures is a significant lead indicator for the overall growth of FDIs.  He cited the FDI figures released by the Bangko Sentral ng Pilipinas which showed a 40 percent increase in the first quarter of the year.

Undersecretary Rodolfo also said that the agency is still on track in achieving its target of Php680 billion for 2018, a 10 percent improvement from last year’s Php617 billion figure. “We expect big-ticket projects to come in by the second half of the year. Foreign and domestic investors remain optimistic especially in view of the government’s Build, Build, Buildand Manufacturing Resurgence Programs,“ he said.

Citra Central Expressway Corporation was the biggest project registered in the month of June as it invests Php25.7 billion in extending the Skyway that will connect Buendia Avenue all the way to the North Luzon Expressway in Balintawak. Other notable projects include the Php1.1 billion theme park of Newscapes Haven Development Inc. in Nabas, Aklan; Hydrocor Corp.’s Php990 million renewable energy project in Ifugao; the Php710 million hospital project of Allegiant Regional Care Hospitals, Inc. in Lapu-Lapu City, Cebu; and the Php439 million mass housing project of PDB Properties, Inc. in Tanauan City, Batangas.

The renewable energy/power sector remains the top source of investments with Php108.2 billion for the first semester, a 168 percent increase from last year’s Php40.3 billion in the same frame. The transportation and storage segment is runner-up with Php37.4 billion, up 298 percent from Php9.4 billion in 2017. Construction/PPP Projects (Php32.9 billion), manufacturing (Php19.8 billion) and real estate (Php15 billion) make up the top five sectors.