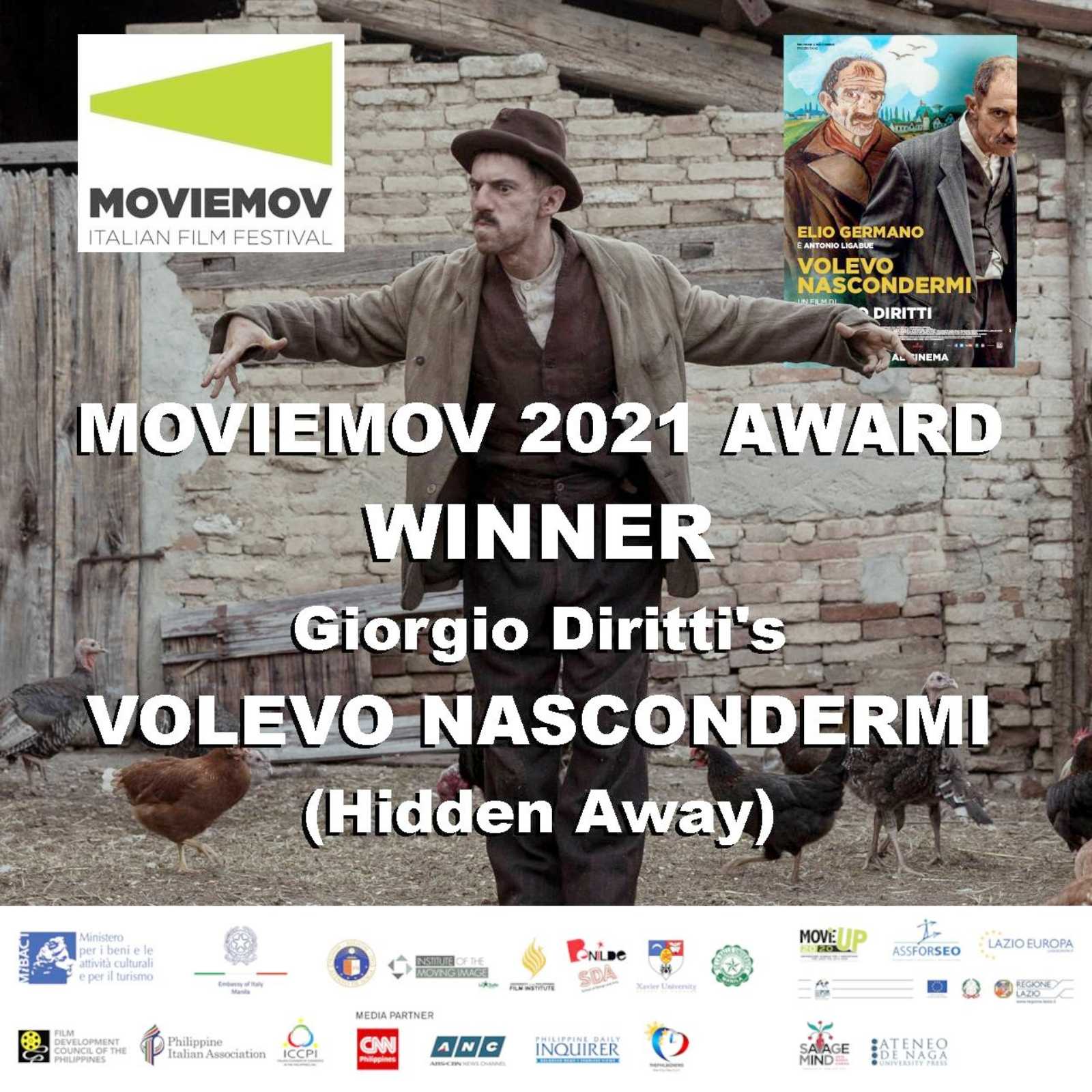 Volevo Nascondermi, directed by Giorgio Diritti and starring Elio Germano, is the winning film of the 10th edition of Moviemov Italian Film Festival which took place from February 1 to 6, in collaboration with My Movies, and celebrated great Italian Art Cinema in the Philippines, reaching 4,900 viewers including movie screenings and talks, as well as 96,000 contacts.

“I’m happy to receive the news of this recognition by Moviemov Italian Film Festival”, said film-maker, Giorgio Diritti. “I’m very happy that the life of this particular artist and the sentiment of his art have reached the Philippines. I can imagine a very happy Ligabue, smiling, riding his bike in discovering that far-away Country, from island to island, looking for new animals to paint and perhaps meeting some artist like him, not very well known, but so confident of his own worth to be able to overcome any humiliation, hardship, loneliness. I’m thankful for this award that I share with all those that made this adventure possible, Elio above all, but also my technical and artistic team as well as Palomar that believed in this project”.

“Another prestigious recognition, that follows the Silver Bear in Berlin, to a movie I strongly wanted and to which I’m very attached”, said Carlo Degli Esposti from Palomar. “Despite the plague of the Covid, the poetry in the direction by Giorgio Diritti and the powerful interpretation by Elio Germano brought the right recognition to the art and the imaginary madness of Antonio Ligabue”.

Filmmakers Silvia Luzi e Luca Bellino presented their short-film Princess that tells of about the terrible fire of last August that razed the homes of a Filipino community in Rome.

Moviemov Italian Film Festival included a tribute to Pinocchio as well, in occasion of the 140 year anniversary of the first appearance of the character in a sequel released on the weekly “Giornale per i bambini” (Children’s newspaper), screening some movies dedicated to the beloved wooden puppet, including the animation Pinocchio (2012) by Enzo D’Alò; Le avventure di Pinocchio by Luigi Comencini; the TV mini-series Pinocchio (2009) by Alberto Sironi; and Pinocchio (2002) directed by and starring Roberto Benigni. The tribute, culminating with a masterclass conducted by writer Marco Franzoso, was a journey between literature and cinema and was made possible thanks to the support of the Embassy of Italy in the Philippines and the collaboration with the Philippine Italian Association and Ateneo de Naga University Press.

For the first time the festival hosted an online part dedicated to business: the objective was the promotion of audiovisual products through screenings targeting buyers, panel discussions and meetings online.

“We are very happy about this year participation, not only of the audience but of institutions and the industry”, said the artistic directors Fabia Bettini and Gianluca Giannelli. “Moviemov, year after year, has become a platform to share and allow the discovery of Italian cinema not only by the audience but also by the industry”.

The Industry section was made possible thanks to the help of Ass.For.SEO, the Global Subsidy MOViE UP 2020, aiming to strengthen the skill of professionals for the promotion of the internationalization and the innovation in the audiovisual sector, and founded by the Regione Lazio – Assessorato Formazione, Ricerca, Scuola, Università e Turismo, POR FSE 2014-2020.

The industry section was made possible also thanks to the essential support of the Film Development Council of the Philippines.

Produced and organized by Playtownroma, directed by Fabia Bettini and Gianluca Giannelli, Moviemov Italian Film Festival is a nomadic festival created in 2010 thanks to the support of the Directorate general for Cinema of the Italian Ministry of Cultural Heritage and Activities and upon request of the Italian Embassies in Bangkok, Manila and Hanoi, with the support of public institutions and other partners in Italy and abroad. The main purpose of the festival is to create a platform for contemporary Italian Cinema abroad, particularly in South East Asia, a region that represents an increasingly more interesting destination, from the cultural and business point of view.