Taking the challenge in the name of legacy 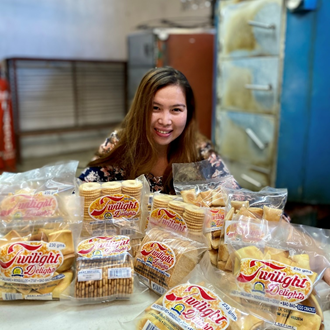 Finding her purpose, deviating from her original profession, and taking a plunge into unchartered waters are the things that Shaddilyn Esguerra did all in the name of the family legacy.

It was not a walk in the park for a nursing graduate in Cebu in finding an occupation. It was really a difficult experience and it is proven that the only time she got to work when she did voluntary service in 2016.

But instead of being discouraged, Esguerra decided to pursue business and when her family’s four-year-old bakery at that time was mismanaged, she asked her father if she could try running it, to which the dad agreed. Being a person she always counted on, her father fully supported and gave her a Php 100,000 capital.

With no experience, the health care alumna nervously did her best from day one starting with two elderly employees.

Things did not get easier at the first five months into the business. Though things were tough, Shaddilyn did not give up. To keep things afloat, she eventually got a part-time nursing job at night. Being a woman of determination, she started peddling to small stores, sari-sari stores, and school canteens from Northern to Southern Cebu, to include the surrounding Islands.

She risked so much in shipping products that were worth more than the returns. Others would complain to her crumbled delicacies. In desperation, she decided to put up a street stall in Colon Street, the oldest street in the Philippines.

Shaddilyn had to ask vendors if they could lend her space where she could set up a stand for a time being. As agonizing as that was, she held on to it as her last hope in those sleepless and long cold nights where thoughts of giving up crossed her mind as well.

Months passed, her Uncle’s driver happened to see her one night laying down resting by her street-side stall. The driver then told her relative which made him upset. Shaddilyn was judged by the packaging of products and was told that they were not as saleable as it seems. This struck her ego and opened her eyes. This became a pivotal point in her business.

Days later, she decided to restart everything by changing the packaging, quality, quantity, and system of the business. Slowly but surely, the business began to grow and the momentum enabled her to add more employees. The timing was even perfect when someone contacted her and remained as the biggest client to this date.

She joined DTI’s Kapatid Mentor Me Program which opened more opportunities for her and the business. She learned to equal the package and quality of her products. During the lockdown, Shadz has strengthened her social media and e-Commerce presence after certain limitations on Pasalubong Centers and bus terminals where her products such as rosquillos, salvaro, galletas and otap are sold.

“Looking back, I surprised myself at how I was able to fight through the storm. Perhaps, God only allow struggles in your life He know you can handle.”

Interested buyers and distributors may reach them via their Facebook page: Twilight Delights. For more information on local products and produce proudly made from Cebu, visit DTI Cebu Facebook page.