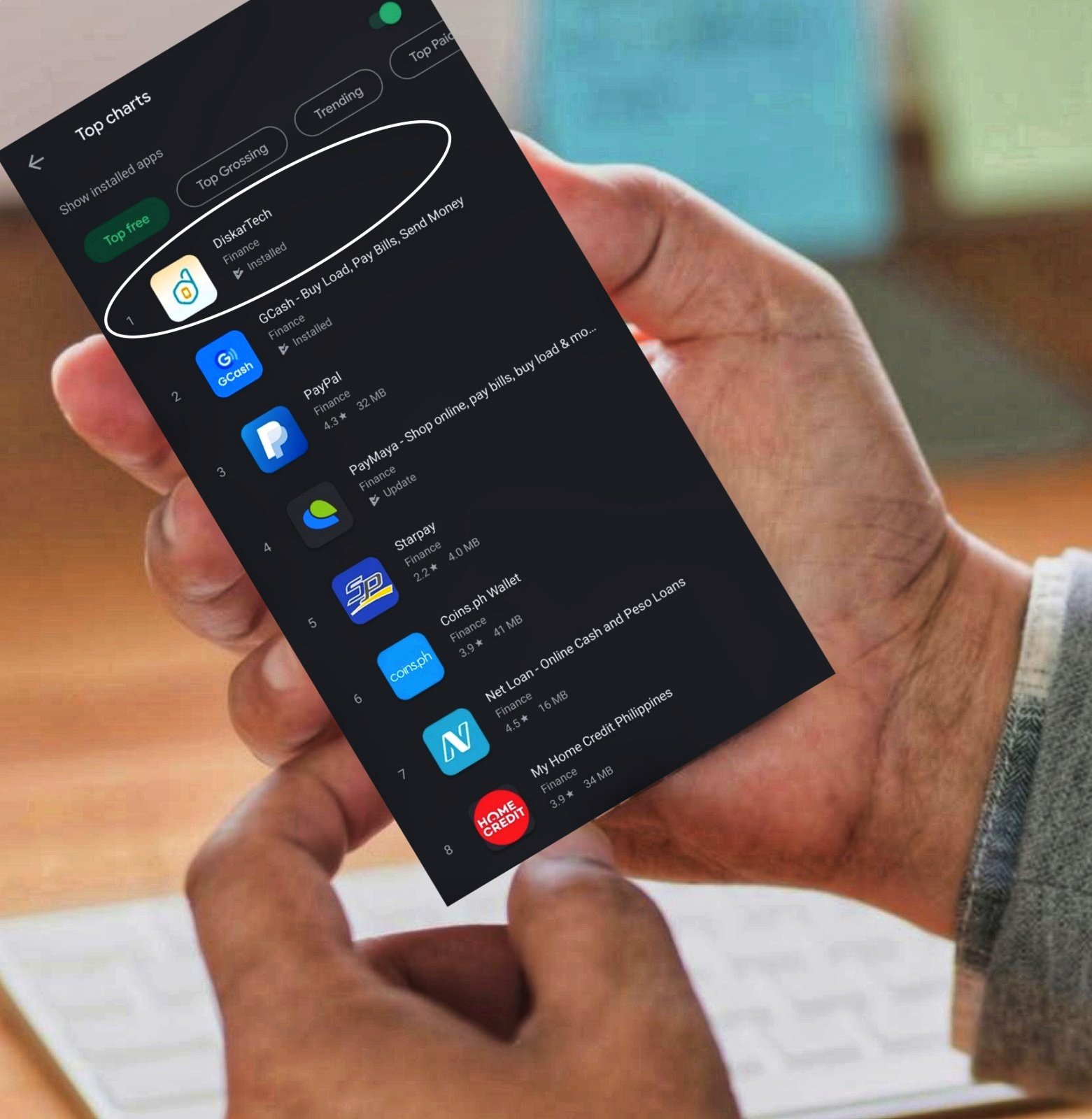 Photo shows, DiskarTech taking number 1 spot among free finance apps in Google Play just since it was launched on its 1st month
Photo collage by THEPHILBIZNEWS

As demand for efficient and touchless payment increases in the midst of the pandemic, DiskarTech has zoomed up the charts of different digital distribution platforms, claiming the top spot among free finance apps in Google Play for Android users in the first month since it was launched.

Meanwhile, for iOS device users, DiskarTech ranks second among free finance apps on the App Store, overtaking those that have been available for years in the market.

Interestingly, the downloads of DiskarTech have breached half a million downloads in less than four weeks with a total of 531,956 as of July 30. At least 50 Filipinos are downloading the DiskarTech app every minute.

In the statement sent to THEPHILBIZNEWS by Lito Villanueva, executive vice president and chief innovation and inclusion officer of Rizal Commercial Banking Corporation (RCBC), he said, “In a crowded field of e-wallets, online banking, and similar apps, Filipinos have warmly welcomed the entry of DiskarTech which stands out as the most inclusive of all.”

“I think what makes this first Taglish inclusion super app a hit was due to its unique product proposition, relevance, and timing,” Villanueva added.

DiskarTech offers a digital savings account that requires no initial deposit nor maintaining balance. It is also the first of its kind whose interface is wholly rendered in conversational Taglish.

For his part, Eugene S. Acevedo, President and Chief Executive Officer of RCBC pointed out, “We want the unbanked and underserved Filipinos to take advantage of the benefits of being part of the formal financial system. This has been RCBC’s thrust of promoting inclusive digital finance which was further accelerated by the COVID-19 pandemic.”

“We have also gamified savings in the app to encourage this important habit among users” the President and CEO of RCBC added.

DiskarTech users with verified basic deposit accounts earn a competitive 3.25 percent interest on their savings, which is also insured with the Philippine Deposit Insurance Corporation.

Bangko Sentral ng Pilipinas (BSP) Governor Benjamin Diokno said in a social media post, “Recent events have forced many of us to the digital realm—financial services included. We can leverage this development to achieve our financial inclusion goals. This is what DiskarTech does as the country’s first “Taglish” app. It provides sachet banking services to unbanked and underserved Filipinos.”

Dubbed as a “super app,” DiskarTech offers a variety of financial tools which include bills payment to utilities and government services, purchase of airtime load and gaming pins, and fund transfer to over 30 banks and mobile wallets using InstaPay.

It also offers a unique telemedicine feature to access offsite medical consultation and assistance. This aims to help Filipinos to have affordable and alternative digital healthcare access during this pandemic

Among other functionalities in the pipeline include loan products and a skills marketplace that will be offered within the app.

Diokno emphasized the increasing importance of digital transactions and the need to enhance the efficiency of digital payments.

“Efficiency in digital payments is really about speed, convenience, and affordability which can clearly be supported by a shift to electronic payments,” Diokno said.

The BSP supports the passage of priority bills that will help the economy to recover. These include the Bayanihan 2 or the Recover as One Act which is the second part of the Bayanihan As One Act and the Financial Institutions Strategic Transfer (FIST) bill which President Rodrigo Duterte mentioned during his State of the Nation Address (SONA) on July 27.

DiskarTech is a digital product of RCBC.