PH vows to deepen trade cooperation with Switzerland, hopes for maximization of FTA 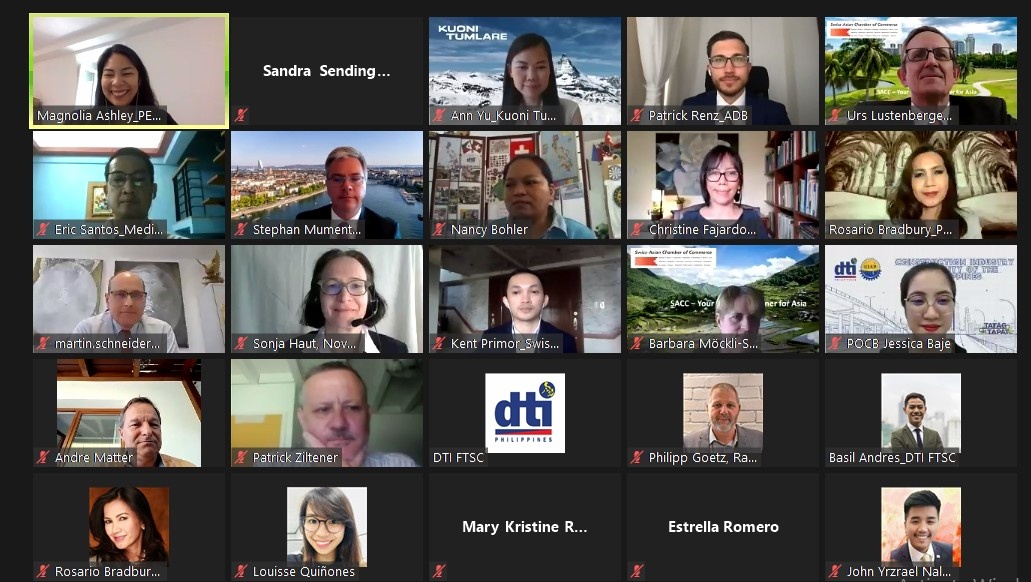 The Philippines reaffirmed its commitment to expand two-way trade and investment ties with Switzerland and deepen cooperation in cleantech and renewable energy, infrastructure, life sciences and digital healthcare sectors ahead of the fourth Joint Economic Commission (JEC) to be held this week and the 65th anniversary of PH-CH diplomatic relations next year.

“We enjoin Swiss businesses…to look closer in the Philippines and assess the merits of investing into the country given the set of incentives that we offer, matched with unparalleled abundance and cost efficiency of labor and of course, access to strategic markets,” Department of Trade and Industry Undersecretary Ceferino Rodolfo said during the virtual business forum entitled “Philippines and Switzerland: Investing Together for a Better Future.”

Despite the pandemic, bilateral trade between the Philippines and Switzerland rose to US$ 764 million in 2020 and Philippine exports to the European country rose 8% over the same period, said Usec Rodolfo. Over the last five years, approved investments from Switzerland reached PHP 1 billion as Swiss entities like Nestle, Franke Food Service, and CHAMP Cargosystems, among many others, continue to thrive and make it happen in the Philippines.

“I would really like to take this forum to convince anyone out there that investing in the Philippines is not only something that will help your business, it will also be something that could help the country,” Dr. Urs Lustenberger, President of the Swiss-Asian Chamber of Commerce said. “The Philippines is a great place, has fantastic people – a hundred million of them – which provides not only a market for themselves [but also] a good base for expansion into Asia.”

Three breakout sessions were held in parallel to focus on the Philippines’ priority investment sectors.  One of these sectors geared for closer collaboration is clean technology and renewable energy, which is especially relevant as the Philippines seeks to increase the share of renewables to more than half of power generation mix by 2040. The investment opportunities in RE lie in upstream development, generation, retail, transmission, and distribution, according to Mylene Capongcol, Director, Department of Energy.

Similarly, Swiss organizations can look into supporting the development of the Philippine infrastructure sector. Switzerland is a donor and shareholder of the Asian Development Bank since 1967, helping the Manila-based multilateral lender finance the growth aspirations of countries like the Philippines.

The break-out session was led by Patrick Renz, Board Member of ADB and Kelly Bird, Country Director of ADB. It featured insights from Department of Transportation Undersecretary Timothy John Batan and Michele Molinari, Member and CEO of Molinari Rail as well as a testimonial from Christophe Lejeune, General Manager of SIKA Philippines.

Health is another sector that can benefit from Swiss expertise, especially as the pandemic highlighted the urgent need to digitize and increase the resilience of the healthcare system.

The discussion was led by Dr. Dennis Ostwald, CEO at WifOR Institute, Sonja Haut, Head Strategic Measurement and Materiality at Novartis, and facilitated by Dr. Stephan Mumenthaler, Director General at ScienceIndustries. It featured insights from Jeff Williams of the Health Information Management Association of the Philippines, Diana Cortesi of Basel Area Business & Innovation, and Dr. Raymond Sarmiento of the National Telehealth Center.

Swiss companies looking to expand their markets can leverage the PH-European Free Trade Association (PH-EFTA) free trade deal that was signed in 2018. Before the deal came into force, Swiss companies paid US$ 10.5 million in duties on US$ 226.7 million in exports per annum in 2017, according to an analysis by Professor Patrick Ziltener of the University of Zürich.

“In 2018, the year prior to entry into force of the PH-EFTA, we had a trade deficit vis-à-vis the EFTA countries to the tune of about US$ 61 million. On the first full year of implementation in 2019, we turned that around so we already had a surplus of US$ 47 million,” said Usec. Rodolfo, adding that the experience was similar when the country’s bilateral FTA with Japan came into force.

When the deal came into effect in 2018, Swiss companies exporting to the Philippines managed to save roughly US$234,000, but still shelled out US$7 million in duties, Ziltener’s study shows. In 2019, the year completely covered by the FTA, the utilization rate of PH-EFTA was around 14% and low on a product-by-product basis, with food preparation and pharma having low utilization rates, while textiles, many metal products, and machines at 0%. “Utilization to increase over time…but proactive information campaign seems necessary,” Ziltener noted.

In a separate study, Ambassador Markus Schlagenhof, State Secretariat for Economic Affairs, cited how Philippine exporters to Switzerland saved roughly half a million Swiss francs in 2019 thanks to PH-EFTA, translating to a 24% savings rate. Swiss companies exporting to the Philippines saved CHF1.3 million or 20% savings rate over the same period.

“We all agree these rates are still very low but the agreement is also very young…and the potential is still largely underutilized. I am confident that when economic cooperators learn more about this agreement, we further have to promote it, in a couple years’ time, it certainly will be much higher than it is right now,” Schlagenhof said.

The webinar was organized by the Philippine Trade and Investment Center in Bern together with the Philippine Department of Trade and Industry, Board of Investments, Philippines-Swiss Business Council, and the Swiss Embassy in Manila in coordination with Switzerland Global Enterprise and the Swiss-Asian Chamber of Commerce. It is part of an ongoing initiative to start a conversation on rebooting the economy through investments in targeted sectors.