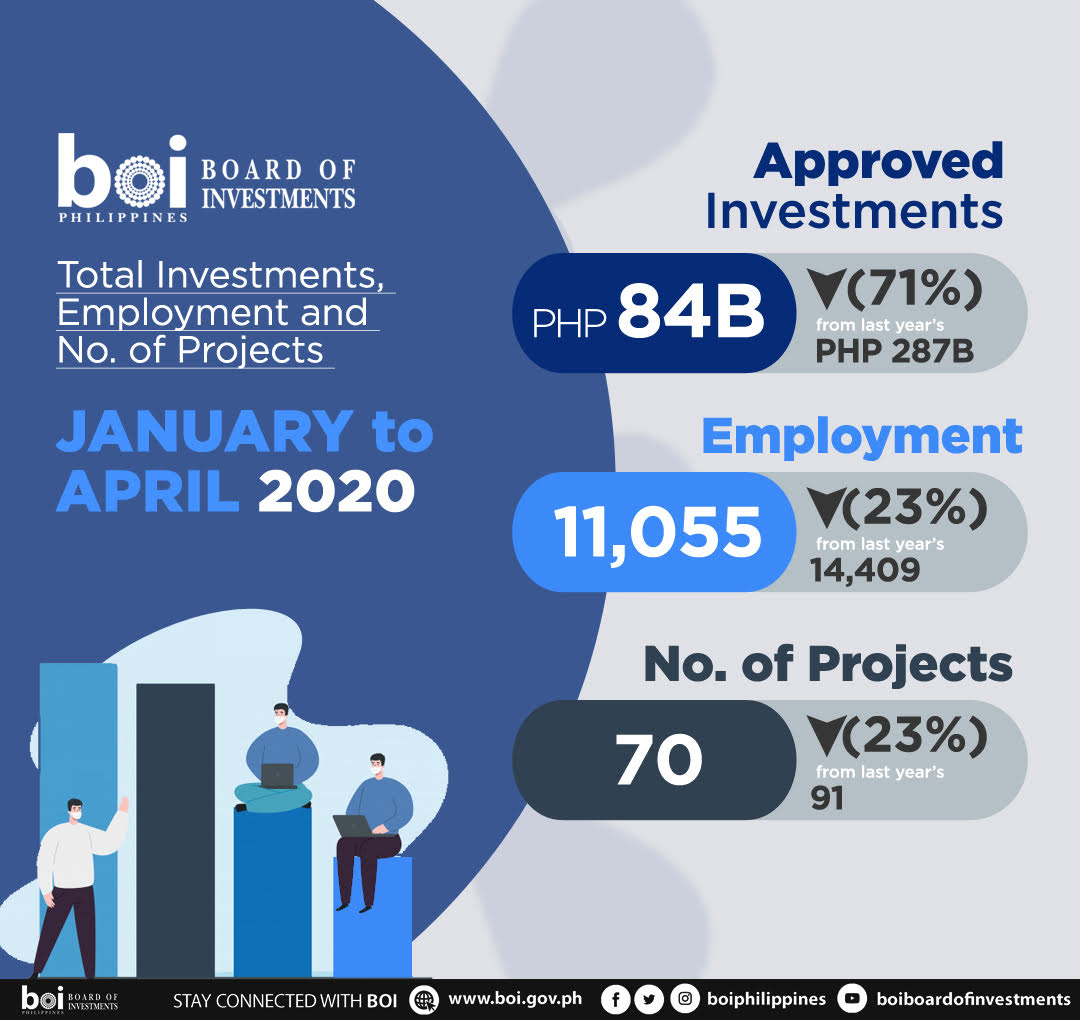 Infographic from Philippine Board of Investments

Admitting the challenges and inevitable adjustments needed to be done in order to be competitive as the COVID19 pandemic still provides uncertainties in the economy and health of the people in the world.

Trade Secretary and BOI Chairman Ramon M. Lopez said, “The downturn is expected due to the COVID-19 pandemic where economic activities and investments are disrupted due to lockdowns around the world. We have to prepare for a v-shaped recovery with a Bounce Back Plan (of the National Government). The economy demonstrated its resilience, contracting by just 0.2 percent in the first quarter of this year—a better performance even if compared with developed countries whose contractions have been from anywhere between 4 to 7 percent. The risk of global recession is real but for our part, we are making sure that this is only transitory and we are already laying the foundation for our recovery,”

The transportation and storage sector figures reached Php60.2 billion, accounting for 71 percent of the total investment figures. The rest went to real estate (Php8.8 billion), manufacturing (Php5.3 billion), power (Php4.2 billion), and accommodation (Php3.8 billion). A total of 70 projects got the nod and once fully operational, these will translate to 11,055 jobs.

France is tops among foreign entities with Php1.5 billion in the capital. Japan is second with Php790 million. Malaysia places third with Php601 million. India and the United Kingdom complete the top five with Php325 million and Php156 million, respectively.

“During the past two months, the role of the BOI had shifted to providing support for firms—particularly those allowed to operate during the various phases of the Quarantine Period—to continue business operations and facilitate continuity in their value chain. While the actual approved figures are down, this is partly because there are investment projects which we have chosen to carefully re-confirm with proponents of their commitment to pursue even in this environment. So far, the investors remain solidly optimistic about the medium-to-long-term prospects of the country,” BOI Managing Head Ceferino Rodolfo said.

Sec. Lopez expressed gratitude to the business community as, in addition to the actual investment projects, the private sector has been quick to respond to the needs of the country in terms of re-purposing their manufacturing capabilities towards essential goods needed in the fight against COVID 19.

“For example, given the export bans imposed by other countries, we have been working hard to increase the local production of medical-grade masks for our frontliners. As a result, from a pre-COVID capacity of just about 7mn masks and all directed to the export market; the Philippines, by end of this month, would already have an actual capacity level of close to 25mn masks for the domestic market.” Sec. Lopez emphasized that similar public-private collaborations have been undertaken for other critical products including ventilators, face shields, medical coveralls, and rubbing alcohol and disinfectants—where companies have re-purposed their manufacturing facilities to produce these.