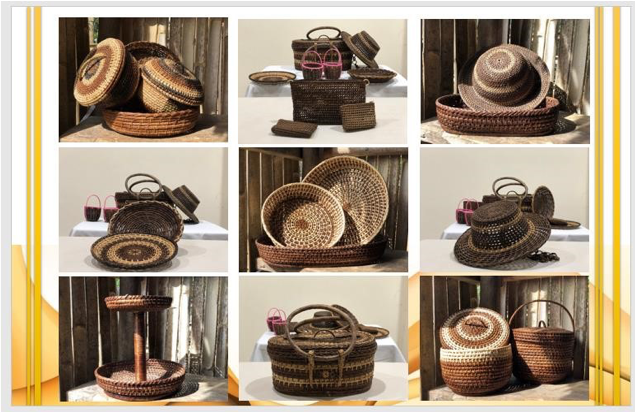 Who would have thought that the ordinary Agsam, also known as nito, an indigenous fern that grows abundantly in Barangay San Pablo, Taft, Eastern Samar, would be transformed into functional hats, trays and baskets?

Interestingly, these ferns have been providing livelihood to a number of men in San Pablo where their creativity is also developed and created their work of heart.  The group of men were organized in the barangay and formed the San Pablo Agsam Handicrafts Farmers Multipurpose Association (SPAHFMA) since they have identified handicraft making as a profitable business to address the socio-economic issues of the community.

With the help of the Negosyo Center, DTI assisted them by providing entrepreneurial seminars and marketing assistance in the form of one-on-one product development workshops, participation in local and national trade fairs, and promotions.

They were also financially assisted by the Center for International and Cooperation (CECI) and Center for Emergency Aid and Rehabilitation Concern (CONCERN) aside from the trainings.

The producers also had the opportunity to undergo a workshop on product development, which made improvements of their product quality and proposed new designs that are functional and trendy. This was immediately applied by the association and created prototypes that were eventually launched in the trade fairs they participated in.

As a result of marketing assistance provided by DTI and the Taft Negosyo Center, San Pablo Agsam Handicrafts were able to link with institutional buyers and received bulk orders from business entities who have met them and were satisfied with the quality, affordability and design of their products.

At this time of the pandemic, DTI has taken the opportunity to assist the association in online marketing and promotion to economically help the farmers who have never stopped their production to cope with the challenges caused by health restrictions and lockdowns.