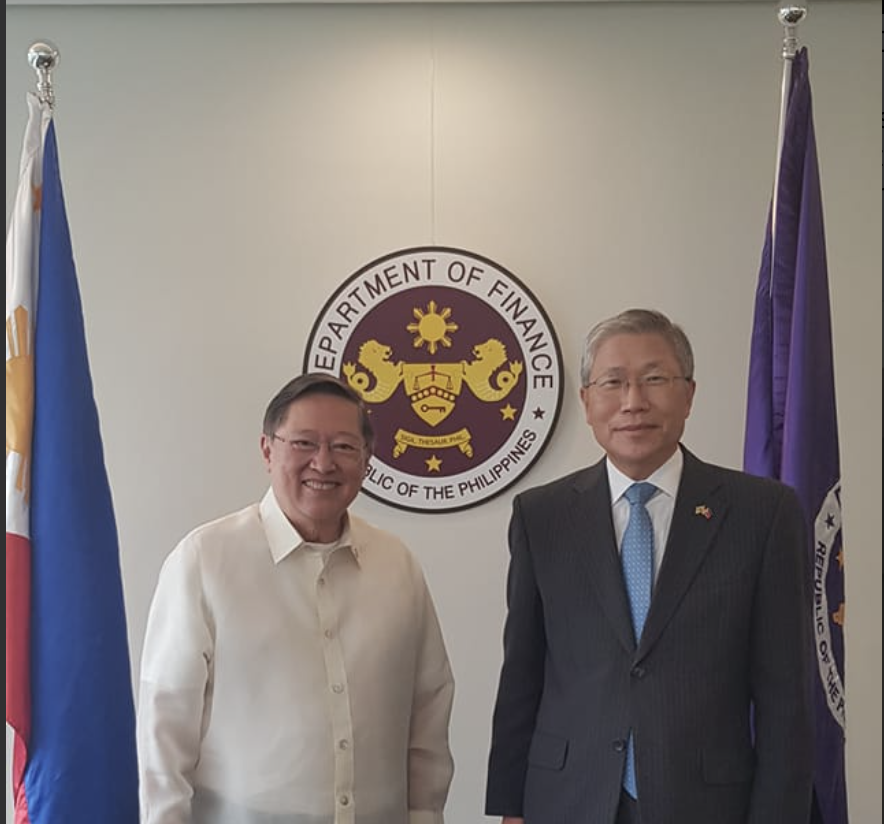 The Korean government has proven its sincere commitment to the Philippines and Filipinos in practically all the endeavors that would help our country rebound in this time of coronavirus pandemic.

Finance Secretary Carlos Dominguez III cherished the efforts of the government of Korea for its swift assistance to the Philippines in its COVID-19 response efforts as well as for increased fund support to the Duterte administration’s “Build, Build, Build” program and initiatives to reform the country’s tax system.

Secretary Dominguez also expressed his appreciation for South Korea’s plan to further expand its investments in the Philippines and step up the pace of the negotiations on the proposed Philippines-Korea Free Trade Agreement (FTA), during a recent lunch meeting with Korean Ambassador to the Philippines Han Dong-man.

On top of providing a US$50-million loan to the Philippines-Korea Project Preparation Facility (PK-PPF) to help bridge operational gaps in implementing projects under the “Build, Build, Build” Program, Korea has also expressed its willingness to extend funding support to the Panay-Guimaras-Negros Bridge Project in Western Visayas, Secretary Dominguez said.

Korea also signed an agreement for a US$100-million loan for the Philippines’ COVID-19 Emergency Response Program last October 29 and has extended its expertise and assistance in setting up an electronic invoicing system in the Bureau of Internal Revenue (BIR) to improve tax administration.

During the meeting, Secretary Dominguez assured Ambassador Han that the Philippine government is intent on advancing the processing of loans and grants with Korea in the pipeline, such as a possible additional loan for COVID-19 response and financing support for projects on maritime safety, a water resources management information system, agricultural modernization and forest management.

Secretary Dominguez also sought Korea’s support in establishing a framework agreement that will provide a basis to process tied financing intended for the procurement of military equipment for the Department of National Defense (DND).

Ambassador Han, for his part, said Korea is always ready to assist the Philippines in implementing its development agenda and in extending support during emergencies such as the COVID-19 outbreak, given the strong ties and enduring friendship between the two countries.

These strong ties have been cemented by the sacrifices made by Filipino soldiers during the Korean War, which marks its 70th anniversary this year, Ambassador Han said.

During the meeting, the Ambassador also said Korea is planning to expand business opportunities in the Philippines, but he has expressed concern over the country’s high corporate income tax (CIT) rate of 30 percent.

He welcomed Secretary Dominguez’s clarification on the proposed CIT reduction under the Corporate Recovery and Tax Incentives for Enterprises (CREATE) bill, which seeks to provide an outright tax cut of 5 percentage points from the current 30 percent tax rate to 25 percent starting this year, and an additional 1 percent reduction every year until the rate goes down to 20 percent.

The Ambassador said a possible investment opportunity that the two countries can explore is the manufacture of environment-friendly vehicles, considering that the Philippines is one of the world’s biggest producers of nickel, which is a key component in making electric car batteries.

Korea and the Philippines are also in the final stages of negotiations on an FTA, which will further expand trade and investment opportunities between the two countries, Ambassador Han said.

Secretary Dominguez said the Philippines is 100-percent behind this FTA as he underscored the Philippines’ strategic location in expanding Korea’s trade footprint in the US$2.6-trillion ASEAN (Association of Southeast Asian Nations) market.

Korea is the country’s 5th largest provider of Official Development Assistance (ODA), with loan and grant commitments amounting to around US$679.65 million or 2.59 percent of the country’s total ODA portfolio as of June 2020.

Through the Korea Export-Import Bank- Economic Development Cooperation Fund (KEXIM-EDCF), Korea has likewise committed ODA loans to the Philippines in the amount of US$631.77 million.

Korea is the 9th largest provider of ODA grants to the Philippines, with a total of US$ 47.88 million as of June this year.