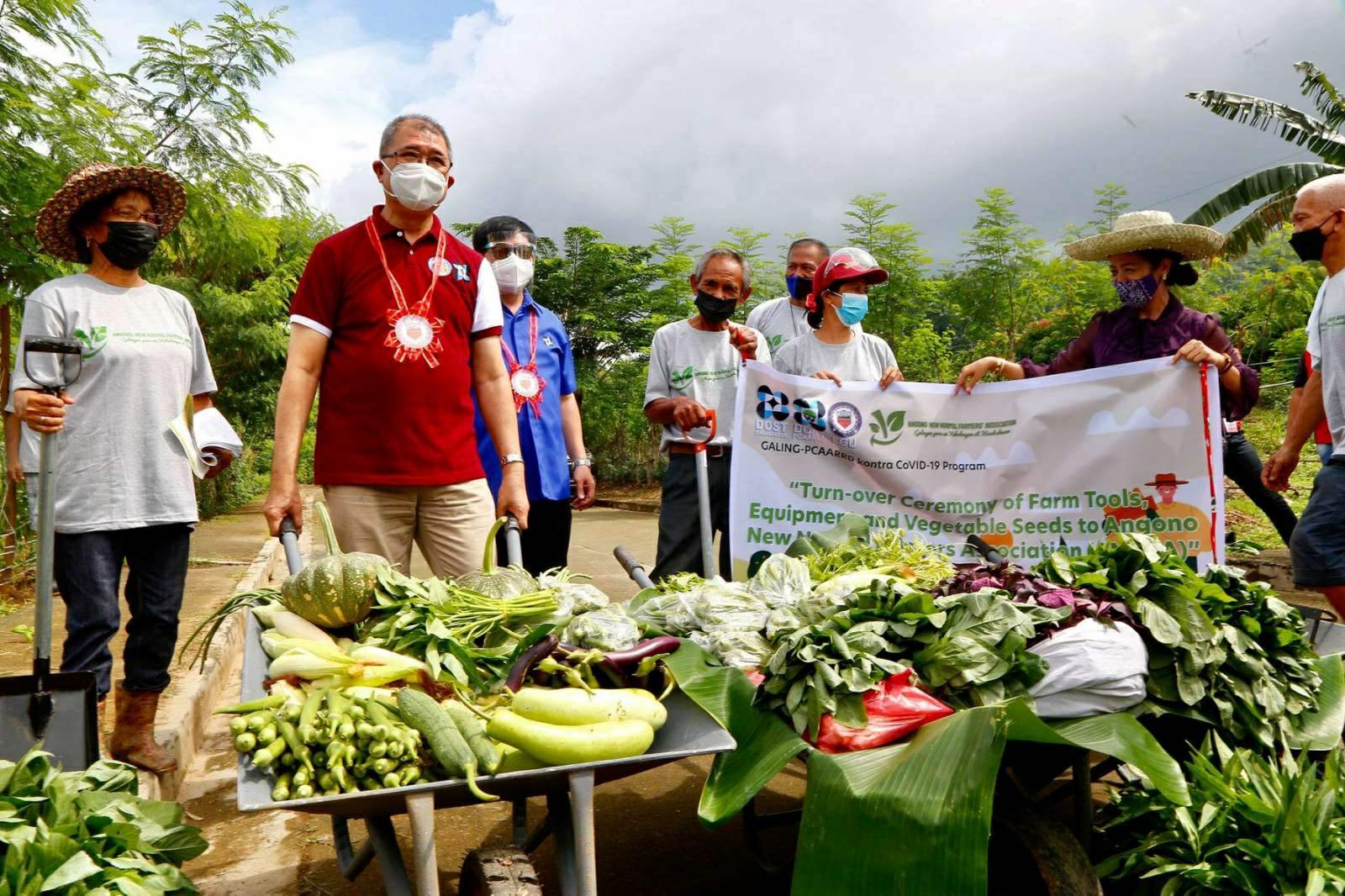 In photo: DOST Secretary Fortunato T. de la Peña shows the bountiful harvest of the group of farmers in Angono, Rizal during the turnover ceremony of the farm tools, equipment and vegetable seeds. (Photo by Henry A. De Leon, S&T Media Service, DOST-STII)

When Department of Science and Technology (DOST) Secretary Fortunato T. de la Peña visited the country’s art capital, Angono, Rizal, the long-time DOST official is on a dual mission – to help the organic farmers improve their harvest and explore the possibility of fusing science with the arts.

On his first stop, de la Peña had a pocket visit to the Angono New Normal Farmer’s Association for the ceremonial turnover of farm tools, equipment and vegetable seeds. The plight of the farmer’s group caught the attention of the science chief when Narissa Piscos, a local media practitioner, came up with a video request to Secretary de la Peña to help capacitate the group in growing their own vegetable produce that they can sell to the nearby community markets in Angono during this time of the COVID-19 pandemic.

According to Ricardo Melendrez, the current president of the farmer’s group, a few of his fellow senior citizen friends would plant petsay or Chinese cabbage in the vacant lots enough for them to buy food for the next few days. However, due to the restrictions brought by the pandemic, they had no means of livelihood as senior citizens are barred from going outside their residence.

When Secretary de la Peña heard about their story, he directed the DOST Regional Office IV-A to look into the possible ways the Department can provide assistance to the farmer’s group.

After a few consultations with the group, DOST IV-A together with the Philippine Council for Agriculture, Aquatic, and Natural Resources Research and Development (DOST-PCAARRD) mobilized its instrumentalities by providing technical capabilities in growing backyard vegetables of what agriculture experts would call the “Pinakbet series”, with reference to the common ingredients of the popular Northern Luzon delicacy which consists of ampalaya, tomatoes, okra, and squash.

He also asked Science and Technology Information Institute Director Richard P. Burgos to deploy the Science and Technology Academic Research-Based Openly Operated Kiosks or STARBOOKS to help the farmers learn from its offline livelihood and entrepreneur videos and other research materials that can be used to expand their knowledge in their craft.

As part of the Science Department’s dialogue with the arts sector, de la Peña introduced DOST’s initiatives in helping grow the sector of local artists. The science chief shared the latest DOST initiative of the DOST-Philippine Textile Research Institute (DOST-PTRI) on natural dyes and pigments developed for the National Historical Commission of the Philippines is one of its restoration projects on local paintings.

According to DOST-PTRI Director Celia B. Elumba, the Institute has already developed 10 pigments from natural sources such as mahogany and talisay where the Angono artists can try and experiment with so they can give feedback in terms of its quality. “Amin pong ibinibigay ang mga nadevelop naming mga paint upang ito ay inyong masubukan,” explains Elumba.

The technology, when fully developed, hopes to provide a local alternative to imported paints that can pave the way to building a strong local creative industry in the country.

On the other hand, DOST-National Research Council of the Philippines Executive Director Marieta B. Sumagaysay encouraged the artists and the Local Government of Angono to submit research proposals on the arts.

Meanwhile, DOST Region IV-A Officer-In-Charge Emelita P. Bagsit said that her office is open to any collaboration from the local government and the local Angono artists to promote the local creative industry of Angono.

Similarly, de la Peña exclaimed that he sees another possible project where DOST and the local government can partner. De la Peña said that aside from the natural dyes and pigments for paintings, DOST can also facilitate the development of a virtual art museum that will feature local artworks of Angono in its digital and interactive form.

Before the visit ended, he also proposed other possible projects that will further enhance the local creative industry in the country that can include the creation of a training center for animation in the National Capital Region, the Bamboo Musical Instrument Innovation Research and Development program, food landscaping, and jewelry production in Bulacan.