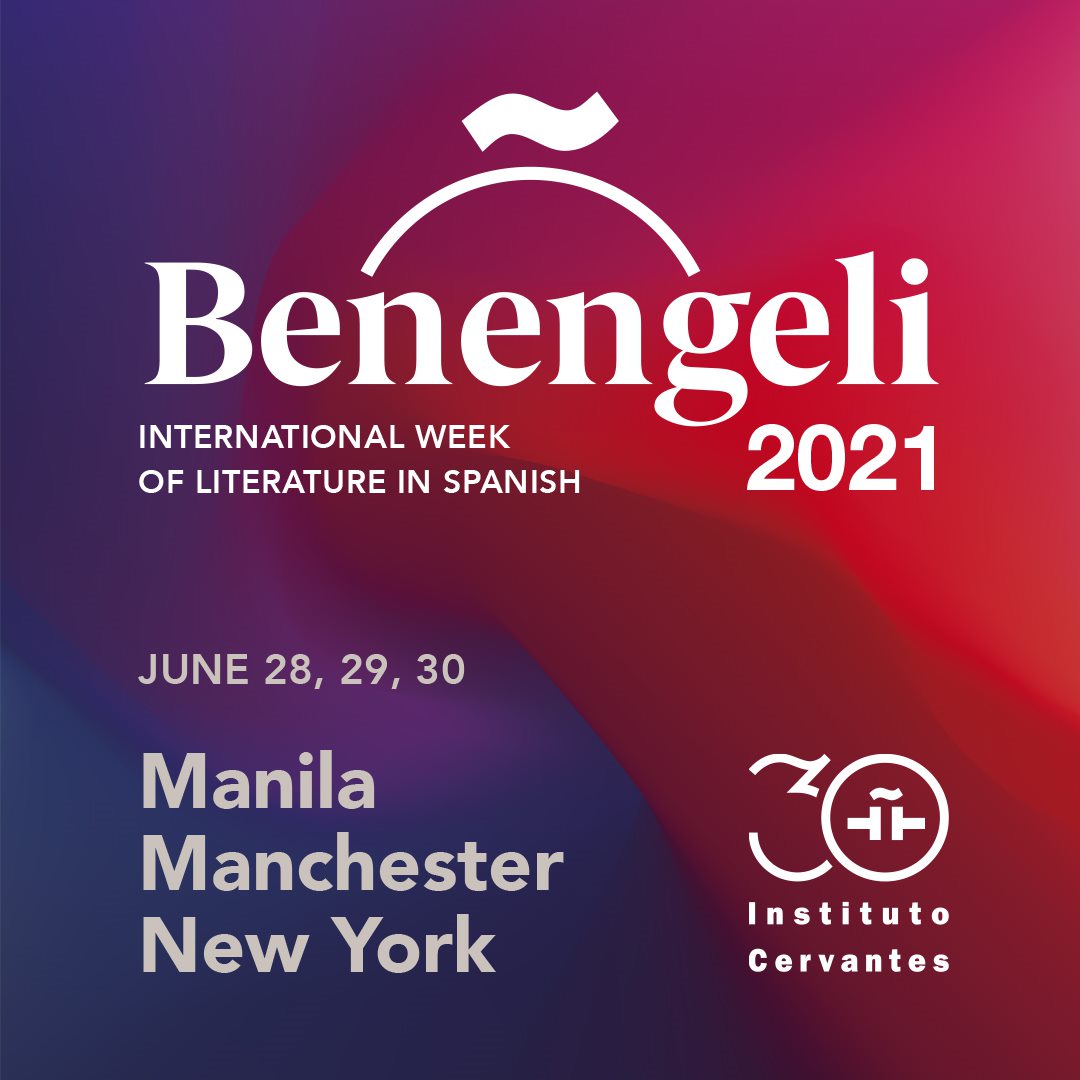 From June 28 to July 1, Instituto Cervantes will hold the “Benengeli 2021”, an online literary festival conceived to promote the dialogue between Spanish-language writers and their colleagues in several English-speaking countries.

Organized by the Instituto Cervantes headquarters in Madrid in collaboration with its centers in Manila, Manchester and New York, the online festival will feature more than 50 videos, 11 podcasts and three online talks subtitled in Spanish and English, and will count with the participation of almost 40 authors from a dozen countries, including two Filipinos – Jose Dalisay and Jessica Zafra.

The entire event can be followed on the You Tube channel of the Instituto Cervantes de Manila (https://www.youtube.com/institutocervantesmanila) and it will also have a podcast version from 2pm every day.

On the opening day,  June 28, at 7pm, Instituto Cervantes de Manila will present the bilingual round-table discussion “Disfigurations of the self: Subjectivity in the novel”, which will bring together José Dalisay, the Argentine writer Hernán Díaz, and the Spanish novelist Víctor del Árbol, moderated by the journalist and narrator Jessica Zafra. During the online discussion, these authors will reveal from their personal perspective the relationship that their writing maintains with the idea of  the subjectivity of the self and of fiction as the space for self-revelation.

Filipino writer Jose Dalisay has authored more than twenty books including short stories, plays and essays. Among his works of fiction, he has penned the novels Killing Time in a Warm Place (1992), which was translated and published in Spain by the prestigious publishing house Libros del Asteroide, and Soledad’s Sister (2008)

Argentina-born Hernán Díaz writes in English. A Pulitzer Prize finalist, he is the author of the novel In the Distance (2018), a resounding success both for critics and readers that won, among other recognitions, the Saroyan International Prize, the Cabell Award, the Prix Page America and the New American Voices Award. In the Distance was also included among the best ten books of the year by Publishers Weekly.

Víctor del Árbol, born in Barcelona in 1968, pursued his literary career after going through the seminary and working as a policeman for ten years. He is currently one of the best-selling Spanish authors of his generation. With thousands of readers in Spain and France, where each of his books is a true publishing success, four of his titles have been translated in English, Above the Rain; A Million Drops; Breathing Through the Wound; and The Sadness of the Samurai.

The three writers will meet online to discuss the literature of the Self, moderated by Jessica Zafra, a popular Filipino fiction writer, columnist, and former television and radio show host. Zafra’s most popular books are the Twisted series, a collection of her essays as a columnist for the newspaper Manila Standard Today, as well as from her time as publisher of the magazine Flip. She just published her first novel, The Age of Umbrage.

Benengeli 2021 brings together authors from Argentina, Bolivia, Chile, Colombia, Cuba, Ecuador, Spain, the United States, the Philippines, England, Mexico, Peru and Venezuela, while covering a broad generational picture that goes from the cult writer José Balza, author of fundamental works of the Spanish language such as Percusión (1982), until Andrea Abreu, whose first novel, Panza de burro, has been quite a publishing phenomenon in 2020.

In the same way, this event consolidates the projection of well-established narrators whose translations into English already have an outstanding journey, such as Antonio Muñoz Molina, whose new title The walk alone in the crowd will soon be released; and Karina Sáinz Borgo, whose novel It would be Night in Caracas was highlighted by Time in the list of the 100 best books of 2019;

A relevant section of this festival is the series of micro-lectures by Fernando Iwasaki, Confieso que he leído (I confess that I have read), who will dedicate a few minutes to present the literary works of important writers from several Spanish-speaking countries. These micro-capsules will mean an opportunity for readers to discover or refresh the trajectory of authors as Sergio Pitol, Julio Ramón Ribeyro, Ana Lydia Vega, Héctor Abad Faciolince, Ena Lucía Portela, María Fernanda Ampuero, Hilda Mundy, Gioconda Belli, Rita Indiana, Augusto Monterroso and Juana Manuela Gorriti, among others.

Benengeli 2021, a clear tribute to the fictional author of Don Quijote de la Mancha, is organized by the Department of Culture of the Instituto Cervantes and curated by Leire Leguina. For further information on the event, kindly check the complete program of the Festival here https://www.cervantes.es/imagenes/File/cultura/benengeli_2021_program_instituto_cervantes_en.pdf, or visit Instituto Cervantes’ Facebook event page: https://www.facebook.com/events/524400885351278