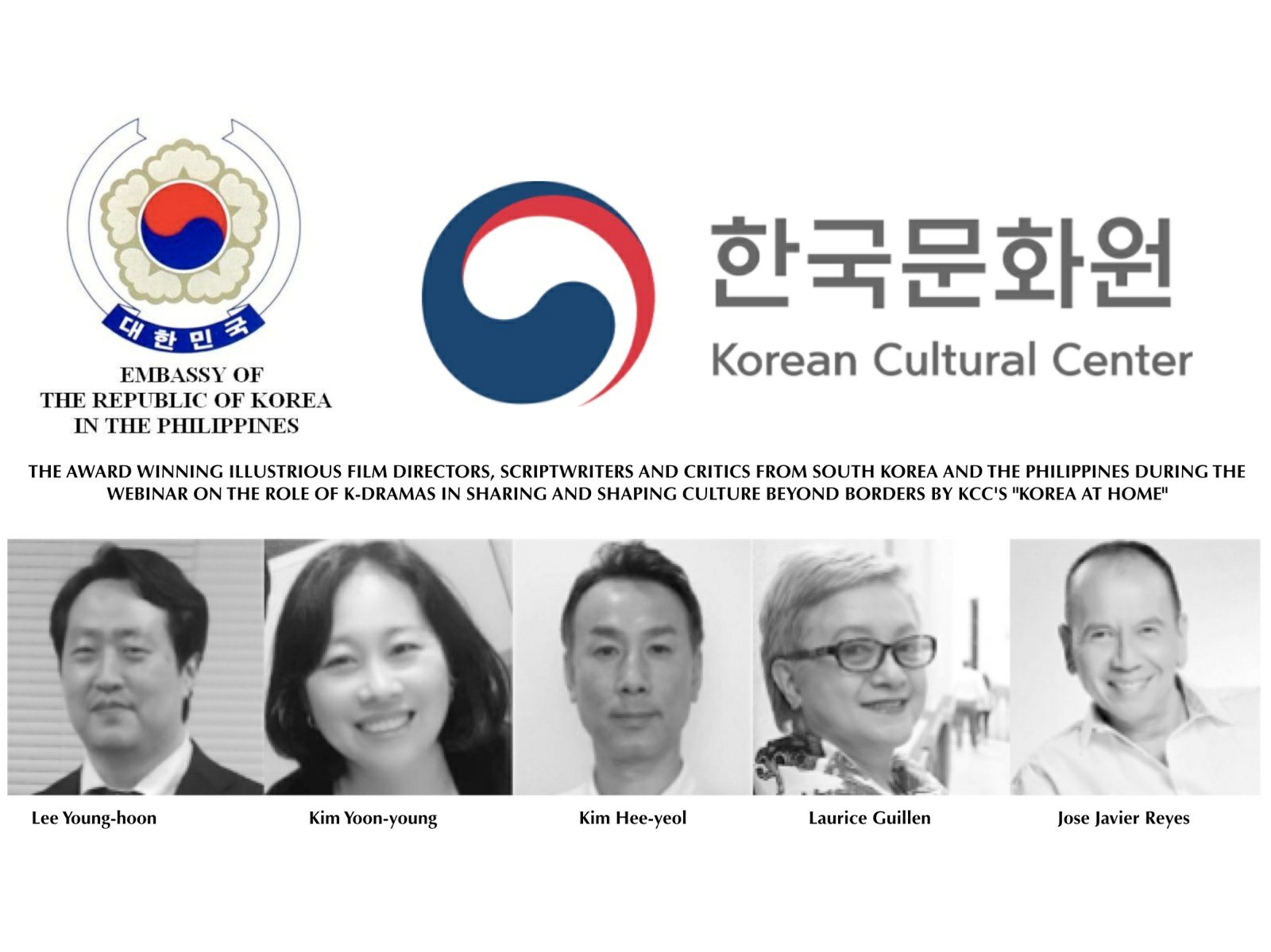 It’s undeniable that the K Culture has attracted a lot of Filipinos and get more familiarized with the rich, colorful, and enigmatic Korean arts and culture. Hence, the K fever goes on.

Thanks to the unwavering efforts done by the Embassy of the Republic of Korea and the Korean Cultural Center in the Philippines (KCC), and their partners such as BGC Arts Center and MIND S-Cool. Through their collaborations, they have spurred conversation and shared new insights and information about one of the most beloved aspects of the Hallyu Wave—the K-Dramas.

Last November 6 and 7, an online webinar was held and discussed the K-Drama production and scriptwriting, and the impact of Korean dramas in bridging Korean culture across different parts of the world. Attended by around 1,600 live audience viewers on both YouTube and Facebook, they actively participated and discussed through the chatbox, sent in questions, and voiced their aspirations for the local entertainment production, and the inspiration brought about by the speakers’ lectures and the event itself. The event even led to the creation of a chat group by complete strangers who now relentlessly discuss how they can assist in the execution of the knowledge and plans tackled at the webinar.

Titled, “The Role of K-Dramas in Sharing and Shaping Culture Beyond Borders,” was organized as part of KCC’s “Korea at Home” campaign together with SMART, the webinar’s official telecommunications partner and Inquirer.net, the event’s official online media partner which aims to continue its goal of promoting Korean culture to the Filipino people at the comforts of their own home during this pandemic.

The webinar featured five speakers; day one, which focused on K-Drama production, had Lee Young-hoon from the Korea Creative Content Agency and Kim Hee-yeol from Pan Entertainment, joined by President of the Cinemalaya Foundation, Laurice Guillen. The second day covered scriptwriting and was headed by Kim Yoon-young, Executive Director of Korea TV & Radio Writers Association, along with the Chairman of the Digital Film Program at the school of design and arts at De La Salle College of St. Benilde Jose Javier “Joey” Reyes.

The presence of speakers from both South Korea and the Philippines enabled them to engage in insightful dialogue about the process of production scriptwriting as well as production in Korea vis-a-vis the practices in the Philippines. Both Kim Yoon-young and Kim Hee-yeol emphasized that the story is king in dramas, a big factor as to their appeal to both Korean and global audiences. They invest time and creative effort into crafting stories from scratch or adapting them from webtoons (online graphic novels) or internet novels because they understand that the storyline is the backbone of a good drama. Not only that, but Kim Hee-yeol points out that they choose to feature themes that “reflect the situation of the times and gives us a chance to look back on our behaviors and the current situation.”

The webinar likewise opened up previously unknown facts about K-Dramas such as actor selection, production rates, talent fees, music and location selection, K-Drama importation, and even the K-Drama script development.

As speakers Lee Young-hoon, Laurice Guillen, and Joey Reyes all pointed out, Korean dramas do not just captivate audiences because of their storylines and plots, but also because of the overall themes that overlap in our cultures, especially in Asia. These are themes such as filial piety, love, and the most evident theme of all, the triumph of good over evil. This, along with diverse and well-thought-out storylines as well as the strong support of the Korean government for the arts and broadcast entertainment, attributes to the international appeal and success of K-Dramas.

The event definitely offers a perceptive window into the ins and outs of K-Dramas and the amount of support that the Korean government is giving to this industry. Although it has laid out the stark contrast between the broadcast entertainment environment between the two countries and may have just set the stage for the beginnings of collaborations between the two countries in terms of broadcast content, as all speakers expressed their interest in doing so.

Filipinos have been interested in K-Dramas for quite some time now, and this has extended their curiosity towards what goes on behind-the-scenes, which KCC has allowed us to have a brief yet insightful glance at.

Apart from the webinar, KCC promises to introduce various programs that can help further develop the local content industry in the Philippines, similar to the path taken by K-Pop and K-Drama. KCC will be bringing in-field experts who will discuss industry know-hows, particularly under the theme of copyright, author education, and idol development programs.

Watch out for KCC’s upcoming events. To stay updated with the Korean Cultural Center’s future webinars and events, you may visit http://phil.korean-culture.org and follow them on their official accounts: