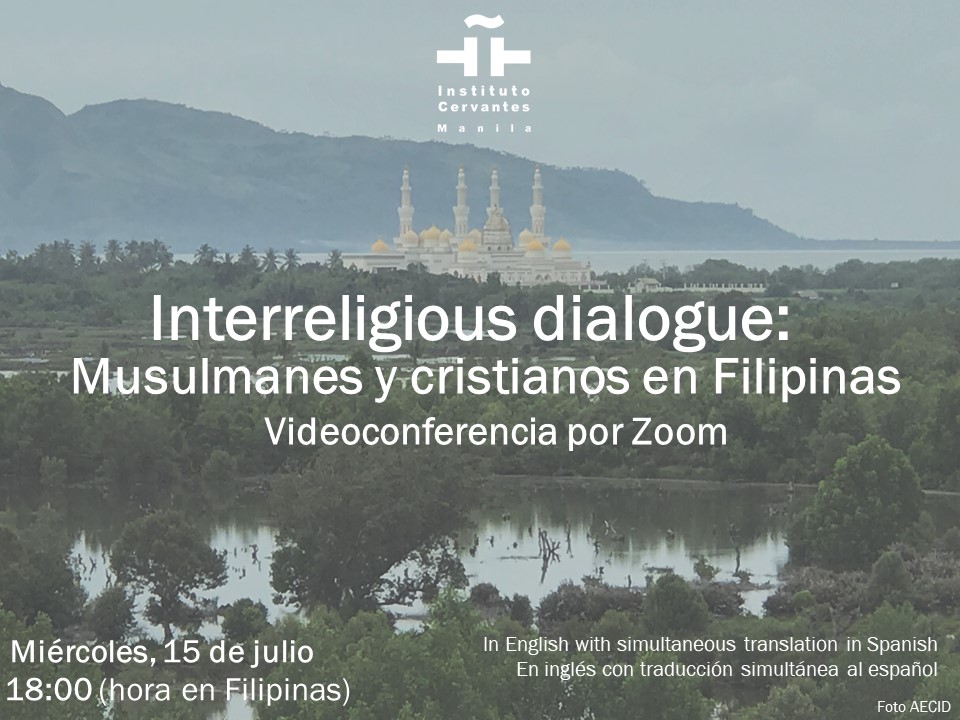 On Wednesday, July 15, at 6:00 p.m., the Instituto Cervantes in Manila will broadcast the online talk on “Inter-religious Dialogue: Muslims and Christians in the Philippines”, in which the Datu Muss Lidasan and the Catholic priest Ángel Calvo will give their thoughts on the coexistence of both faiths in current Philippine society.

Muss Lidasan is the Executive Director of the Al Qalam Institute of the Ateneo de Davao and a member of the Bangsamoro Transition Authority. For his part, the Claretian priest Ángel Calvo is the President of the Peace Advocates Zamboanga Foundation, Inc. and of the Zamboanga-Basilan Integrated Development Alliance. From their respective roles, both work to promote dialogue and understanding between communities of the two different faiths.

The talk, to be moderated by Javier Galván, the Director of the Instituto Cervantes in Manila, will also be attended by Juan Pita, the Coordinator-General of the Spanish Agency for International Development Cooperation (AECID), who will summarize the actions that the Agency carries out in Mindanao to contribute to the peace process, and which focus on measures to support the communities affected by the armed conflicts.

Also, Monsignor López Romero, the Archbishop of Rabat, will speak from Morocco during the webinar with a recorded message. López Romero, who was appointed Cardinal last year by Pope Francis, has been a leading promoter of the dialogue between Muslims and Christians for many years.

Since the COVID-19 pandemic broke out, the Instituto Cervantes in Manila, the cultural arm of the Embassy of Spain in the Philippines, ​​organizes a webinar every month on cultural aspects that are of special interest to the Filipino public.

This talk will be broadcasted in English with simultaneous Spanish translation on July 15 at 6:00 p.m., through the Zoom platform with the link https://zoom.us/j/94121131561.

The talk can be accessed as early as fifteen minutes before it starts. The audience who wish to request for a certificate of attendance may do so, provided they request it at least one day before the date of the webinar and give proof of having followed the activity once the event has concluded.

For further information and updates on this event, please check out  http://manila.cervantes.es  or the Instituto Cervantes’ Facebook page:  www.facebook.com/InstitutoCervantesManila.