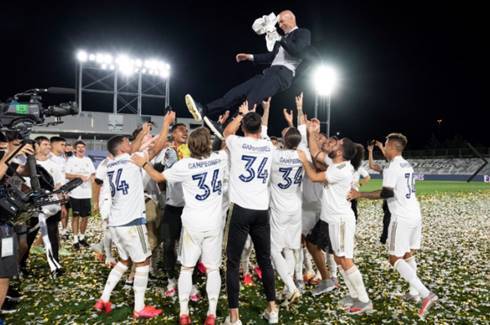 After its last win in 2017, Real Madrid bagged their 34th league title against Villareal on Thursday, (Central European Time) after successfully winning all 10 matches after their return from a three months disruption brought by the COVID-19 pandemic. 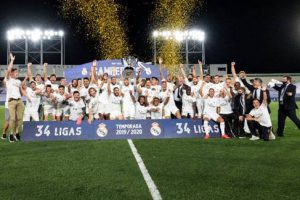 In summary, here are the five key reasons why Real Madrid have just clinched their 34th LaLiga title

Now a double LaLiga winner to go with his three Champions Leagues as a coach, Zinedine Zidane is clearly an excellent tactician and man-manager, but maybe his biggest virtue as Real Madrid boss is his ability to generate and maintain a positive mindset within his squad. Last August it was far from clear that Real Madrid would have a good 2019-20 campaign, after finishing the previous season 19 points behind winners FC Barcelona, and then a difficult summer transfer window. But Zidane was super positive right from the off – and the former Galáctico kept repeating that Real had the best players and that the LaLiga title was their key objective in mind. Over the following 11 months of this strangest of seasons, Zidane has kept that optimism in place, and it has been a huge support for his players in overcoming the many challenges faced both on and off the pitch. 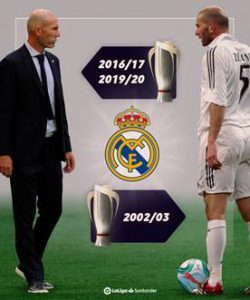 The focus after the COVID-19 break

The focus with which Madrid returned from the COVID-19 break was crucial – and helped Zidane’s side win an incredible 10 consecutive games to overhaul FC Barcelona and take the title. Blancos midfielder Toni Kroos scored just two minutes into their first game back against SD Eibar, and they were never behind in any game before they clinched the title. Even as Zidane rotated his team amid the heavy schedule of games every three or four days, there were none of the individual errors or lapses in concentration which have derailed Madrid title challenges in the past. Zidane welcomed the comparison with the quick-fire format of an international competition like a World Cup, a challenge his team of experienced winners were well used to taking on. They also handled very comfortably the move to the Alfredo Di Stefano training ground, due to work at their Estadio Santiago Bernabeu stadium, with a minimum of fuss.

Just 23 goals conceded across their first 37 games was crucial to Madrid’s title victory. A run of seven clean sheets in eight games during the autumn set them on their way, while just four goals conceded in the first 10 matches following the COVID-19 enforced break underlined just how tight they became. Goalkeeper Thibaut Courtois went over 500 minutes without conceding a goal during this time, with skipper Sergio Ramos, fellow centre back Raphael Varane and holding midfielder Casemiro also immense. However the defensive solidity was really a team effort – with Zidane ensuring that even his attacking Galácticos had to work hard on or off the ball, or he would bench them for someone else who would.

Benzema’s outstanding 21 goals, along with a record 21 different goalscorers

Unequalled squad depth was also key to Real Madrid’s title victory, with their extra numbers and quality really telling when the games came thick and fast during the accelerated end to the season. 26 different senior squad members got playing time across the first 37 LaLiga games, while an even more spectacular stat is that a record 21 players got on the scoresheet. Karim Benzema’s 21 LaLiga goals have been crucial, but he has had help from all areas of the team. The extended season even allowed long-term injury victim Marco Asensio to return and score twice during the run-in, while left-back Ferland Mendy hit his first LaLiga goal in the 2-1 victory over Granada CF last Monday. No other LaLiga squad this season – not even FC Barcelona – was even close to as strong or deep.

A victory in El Clásico to overcome FC Barcelona

The key game of the season was Real Madrid’s 2-0 LaLiga El Clásico victory over FC Barcelona back in March. A very tight game was decided late on with goals from Los Blancos back-up attackers Vinicius Junior and Mariano Diaz. These three points proved crucial down the stretch, while added to the 0-0 in the reverse El Clásico at the Camp Nou back in December, it meant Zidane’s team also had the head-to-head advantage in their favour and a crucial psychological advantage over Barça during the run-in over recent weeks.

The key game of the season was Madrid’s 2-0 LaLiga Clasico victory over Barcelona back in March. A very tight game was decided late on with goals from Los Blancos back-up attackers Vinicius Junior and Mariano Diaz. These three points proved crucial down the stretch, while added to the 0-0 in the reverse Clasico at the Nou Camp back in December, it meant Zidane’s team also had the head-to-head advantage in their favour and a crucial psychological advantage over Barca during the run-in over recent weeks.

LaLiga remains the most competitive and top league in Europe