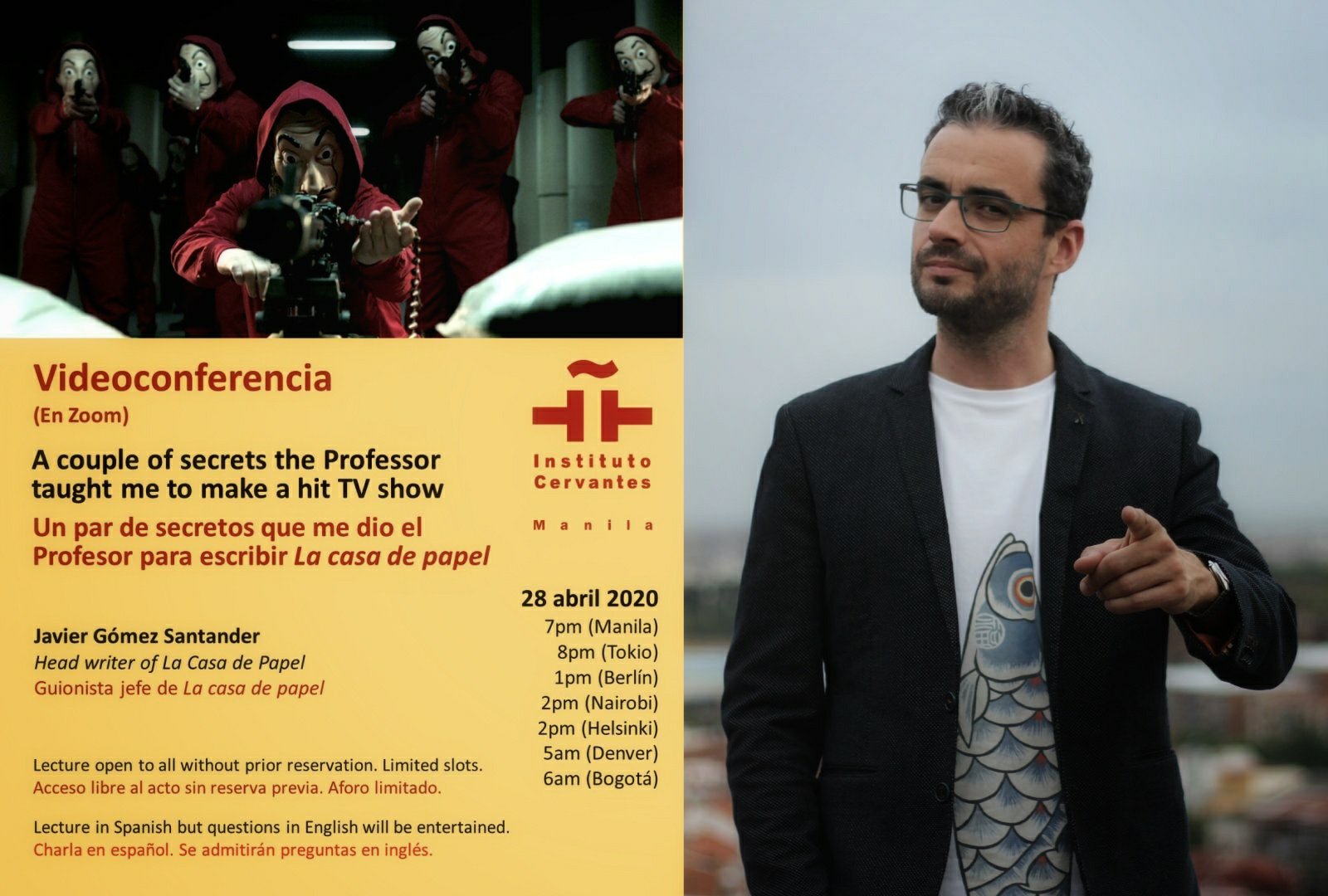 Good news for filmmakers, writers, and producers. This April 28, at 7pm, the Instituto Cervantes de Manila is presenting an online lecture by Javier Gómez Santander, the Head writer and Executive co-producer of the popular Spanish TV show La casa de papel, one of Netflix’s popular TV series shows that is also trending since the ECQ is implemented.

In his talk, Gómez Santander will share aspects of his career as a screenwriter, as well as a couple of secrets and details of the creation of the successful crime drama that has taken the world by storm.

The TV series is about the two well-planned robberies led by the Professor, one on the Royal Mint of Spain, and one on the Bank of Spain. Initially intended as a limited series to be told in two parts, it had its original run of 15 episodes on Spanish network Antena 3 in 2017. Later in the year, Netflix acquired global streaming rights, and renewed the series with two more seasons. The latest one, Part 4, was released on 3 April 2020. On the same day, a documentary titled Money Heist: The Phenomenon was also premiered. It was written by Javier Gómez Santander and Pablo Lejarreta, and showed the audience some facets of the show, involving the producers and the cast.

La casa de papel received several awards including best drama series at the 46th International Emmy Awards, as well as critical acclaim for its sophisticated plot, interpersonal dramas, direction, and for trying to innovate Spanish television. By 2018, the series was the most-watched non-English language series and one of the most-watched series overall on Netflix.

Before his stint in La casa de papel, Javier Gómez Santander worked as a radio, press and TV journalist for 15 years, until he decided to leave the media and write fiction.

The online lecture, presented by Instituto Cervantes de Manila in collaboration with the Embassy of Spain in the Philippines, will be in Spanish but questions in English will be entertained. Admission is free on a first-come, first served basis via Zoom. For further information and updates on this event, you may visit http://manila.cervantes.es or Instituto Cervantes Manila Facebook page: https://www.facebook.com/InstitutoCervantesManila

Live exchanges of e-Certificates of Origin via ASEAN Single Window reach over 8,700 transactions per month
October 1, 2020
7-Eleven partners with DOH to tackle COVID-19 at the community level
October 1, 2020
PH Universities Express Support for EHEF
October 1, 2020
Amway Philippines collaborates with the Office of the Vice President to help the frontliners, other communities
October 1, 2020
Group urges government not to forget the poor, disadvantaged as school opens on October 5
October 1, 2020

7-Eleven partners with DOH to tackle COVID-19 at the community level
October 1, 2020